There were dozens of dogs in the back of the van travelling the 1,400 kilometres from Tennessee to the Greater Toronto Area – and one of them was a barker.

The trip last year was one of the bigger rescue missions that Save Our Scruff has embarked on, this one in collaboration with another agency in the same line of work. The charities are part of a growing grassroots effort to bring dogs to Canada from places as far flung as Mexico, El Salvador and Egypt, where overpopulation is a far bigger issue.

Contrast that with Canada’s urban centres, where we’re “winning the war on dog overpopulation,” according to one Toronto city official.

Volunteers with the two groups in Tennessee stacked the crates in the back of the cube van and began the long drive home. Before that, they spent two days working on the farm where the dogs had been living.

Aside from the lone yappy passenger, the pups didn’t make too much fuss during the trip home, said Jenna Bye, executive director of Save Our Scruff. Because it was cool outside, the dogs were comfortable and less prone to complaining. In the summertime, it takes more planning and effort to keep the dogs from overheating.

But arranging such treks is far from a walk in the dog park.

In their five years, Save Our Scruff has adopted out 1,700 dogs and counting, and Ms. Bye estimates that more than half are from outside of Canada. Twenty more dogs are currently listed on their website as available for adoption.

“Sometimes I feel like I’m running a logistics company,” she said.

Larger organizations such as the Humane Society International have been at it for far longer – Save Our Scruff took in its first dogs in 2014 – but Ms. Bye said she’s seen the number of independent groups like hers climb over the past few years.

The underlying reason for the popularity of such rescues is multi-pronged, beginning with a smaller supply of stray dogs in Canada, said Mary Lou Leiher, a program manager with Toronto Animal Services.

“I think it was about 2005 when it struck me that we were winning the war on dog overpopulation,” she said, noting that more dogs are being spayed, neutered and microchipped, so stray dogs can’t multiply and lost dogs are more often returned home.

This reduction in supply of homeless dogs has coupled with an increased demand for pups, Ms. Leiher said.

“Dog ownership is trending,” she added.

Good numbers on dog populations are hard to find – comparatively few people register their dogs with their cities and pay the accompanying fee, Ms. Leiher said, so while those figures are steadily climbing in cities such as Toronto, they only represent a fraction of the actual population.

Nor does the Canadian Food Inspection Agency, which is tasked with regulating the importation of animals into Canada, track the number of dogs brought into the country, it said.

But research conducted by Kynetic on behalf of the Canadian Animal Health Institute suggests that in 2018, there were 8.2 million pet dogs in Canada – up from 7.6 million two years earlier. And for the first time since the industry association began conducting the research, the number of dogs was nearly on par with cats.

In fact, she said, Toronto Animal Services has partnered with some of those organizations, transferring dogs over to them to be adopted out instead of keeping them in city kennels.

Last year, 273 dogs were adopted out and 221 were transferred to another dog rescue.

The independent agencies present some benefits over traditional shelters, Ms. Leiher said – they can be cared for by individuals in their homes, and the charities are generally very good at marketing.

At Save Our Scruff, each dog has an online profile that reads something like a dating profile – equal parts enticing and informative.

For instance, meet Nutri: a two-year-old rat terrier mix from Mexico who’s looking for his happily ever after.

“Do you like fairy tales? Nutri is ready to be your prince charming,” it reads. “When he doesn’t have the zoomies, you can find him dozing like sleeping beauty.”

But social media is what really grabs potential adopters’ attention, Ms. Bye said. If people follow their Instagram or Facebook pages, the images of adorable dogs in need of homes are delivered straight to them – they don’t need to seek the information out.

It also works for attracting volunteers, she said, noting her organization is 98 per cent volunteer-run.

For instance, Ms. Bye said many of the dogs are flown in with vacationers signing up as “flight parents” ahead of their trips to certain countries.

Save Our Scruff – with its partners abroad – will arrange the rest: the dog’s transportation to the airport in its home country and from the airport in Toronto, along with a foster family for the animal to stay with in Canada.

“That’s where the dogs thrive,” Ms. Bye said. “It sets them up for a life that they can expect long-term, and gives them a chance to show us the kind of dogs that they’re going to be long-term.” 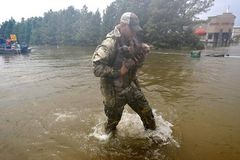 4,400 people file adoption papers for dogs seen on first ever Fox Dog-A-Thon for rescue dogs
May 12, 2018
Report an error
Due to technical reasons, we have temporarily removed commenting from our articles. We hope to have this fixed soon. Thank you for your patience. If you are looking to give feedback on our new site, please send it along to feedback@globeandmail.com. If you want to write a letter to the editor, please forward to letters@globeandmail.com.
Comments