More than 10,000 years ago, the limestone caves near Tulum, Mexico, were an irresistible and occasionally fatal attraction for some of the earliest inhabitants of North America – a past that was preserved for the ages when the caves were inundated with water.

Now, through a series of spectacular finds, an international team of divers and scientists has revealed what drew at least some ancient people into those labyrinthine depths: They were mining for ochre.

The discovery opens a new window into one of the most intriguing archeological sites in the Americas, connecting those who used it to the rust-coloured mineral that has been valued since the dawn of humanity.

“Ochre is a universal,” said Brandi MacDonald, a Canadian archeologist at the University of Missouri who has examined traces of the iron-rich pigment in prehistoric settings from the Pacific Northwest to southern Africa. “What fascinates me is that it’s been so consistently used and sought out,” she said.

Dr. MacDonald is the lead author of a report published Friday in the journal Science Advances that documents extensive ochre mining in three underwater cave sites on the eastern edge of the Yucatan Peninsula. 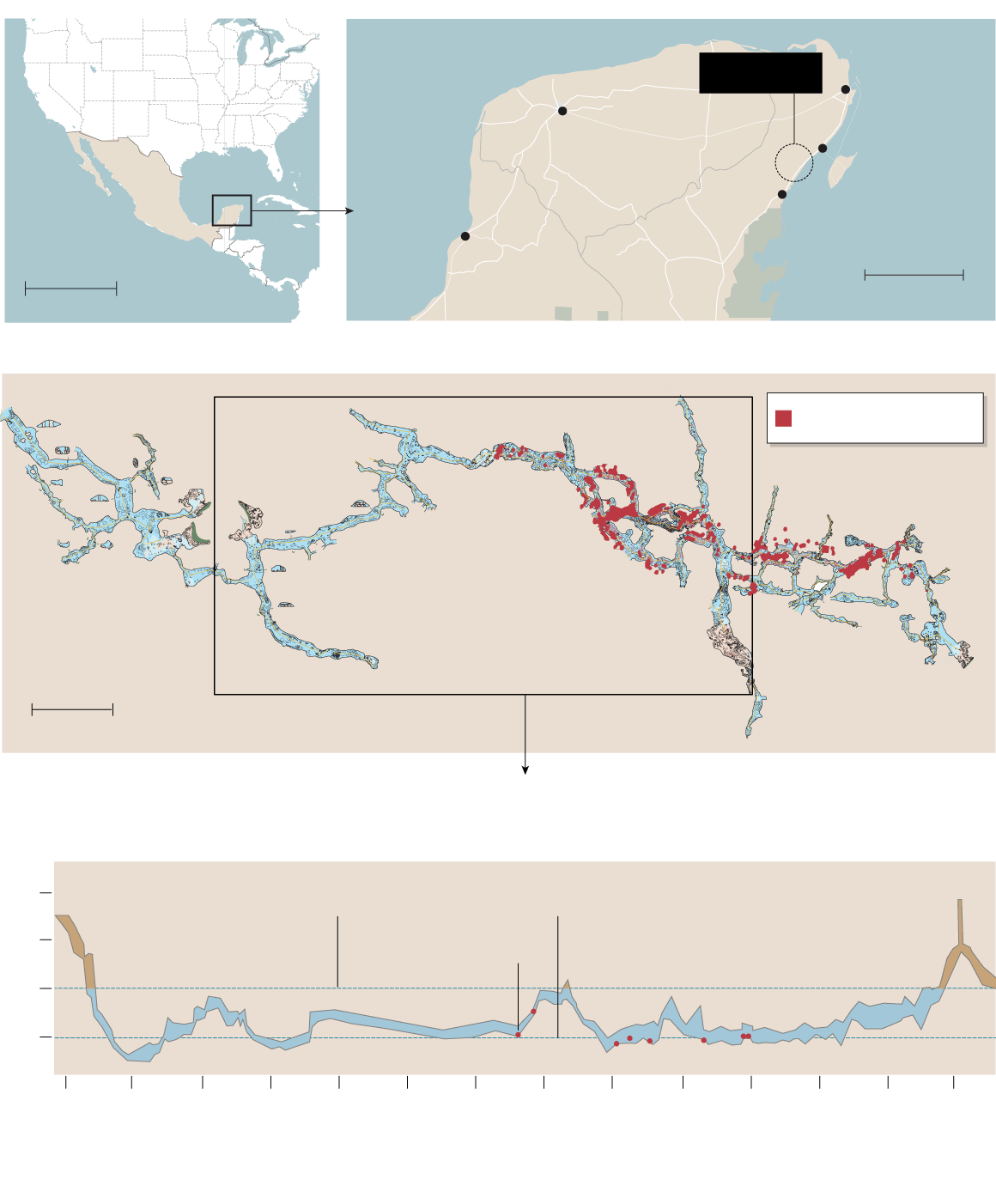 JOHN SOPINSKI and murat Yükselir / THE GLOBE AND MAIL, SOURCE:

The area is already well known for discoveries related to the early peopling of the Americas. In recent years, human remains and the bones of many types of animals have been found in an underwater cave called Hoyo Negro. The trove includes the skeleton of a teenage girl, nicknamed Naia, who is thought to have died around the end of the last ice age when she stepped off a cliff in a pitch-black tunnel.

But while Naia and her contemporaries are among the earliest humans found anywhere in the New World, until now there has been no indication why they ventured into the caves and made their way through narrow passages hundreds of metres away from sources of natural light.

The new discoveries provide an answer, based on photos and samples from three cave systems all within 20 kilometres of Hoyo Negro. They include places where hard flowstone covering a cave floor was battered to get at the ochre beneath; where holes and trenches were dug to extract the material; and where stalagmites were broken off and used as tools to smash rock or as signposts for returning miners.

“It’s one of those few cases where a site is telling you exactly what’s going on,” said James Chatters, a Seattle-based archaeologist and team member. “There’s not a lot that you have to imagine. You can just see it.”

Spencer Pelton, a University of Wyoming archaeologist who was not involved in the discovery, has been excavating a spot near the Platte River, 150 kilometres northeast of Laramie, where ancient North Americans dug for ochre. He said the team’s extensive documentation of the Mexican cave system, showing pits and tailings, builds a compelling case. “What they found is exactly what you would expect in an ochre mining site,” he said, adding that the discovery was “truly extraordinary” because of its rarity and challenging location.

For Fred Devos, a Canadian diver and diving instructor who has worked in the Yucatan for the past 24 years, often in conjunction with visiting archaeologists, nothing compares to the enclosed, liquid universe of the caves. “The water is crystal clear and very quiet,” he said. “We could potentially be diving during a hurricane and it really wouldn’t matter.”

Exploring the multitude of submerged passages is a careful process of surveying, photographing and mapping places that have not been seen by human eyes for at least 8,000 years, when changing sea levels forced the water table upward and the caves were flooded.

When a new area is investigated, Mr. Devos said the usual approach is to follow the current upstream to trace the water back to its entry point, then systematically check for passages that branch off from the main flow route.

It was during one such exercise in 2017, in a cave system called Sagitario, that he and fellow divers spotted a narrow opening that looked altered, as though someone had once tried to pass through. They cleared away some of the rock and decided to enter. With their stomachs pressed to the cave floor and their scuba tanks bumping along the ceiling, they wriggled into a new section of the cave. There they found more obvious signs of human activity, including a stalagmite broken off the floor and stuck into the sediment, point downward, with other fragments stacked up around it to keep it upright.

“You’re immediately aware of the fact that you’re not the first person that’s been there,” Mr. Devos said, describing the location that has since been dubbed La Mina. He added that the cavern feels so immediate and well preserved, it’s hard to believe the last people there lived thousands of years ago.

“It really looks like they turned off the lights and left yesterday,” he said.

The findings at La Mina stretched for hundreds of metres and led to more discoveries elsewhere; once the divers knew what they were looking for, it became easier to spot signs of organized human activity such as pits or piled cairns. Two additional mining sites, Camilo and Monkey Dust, were identified.

“At first, we didn’t know what they were digging the pits for,” said Eduard Reinhardt, a collaborator and geo-archeologist at McMaster University in Hamilton.

Dr. Reinhardt said that in the watery environment, the normally reddish ochre has a dull brown hue. It was only when divers began sampling sediment that the full picture emerged.

In the summer of 2018, Dr. Reinhardt invited Dr. MacDonald, a former student, to his lab to inspect material collected in the caves. Aware of her expertise with ochre, he was hoping to get a definitive answer about the sediment.

Dr. MacDonald said she took one look at the wet, dense silt that stained a rusty orange when she rubbed it between her fingers and had no doubts.

“I knew right away it was ochre,” she said.

Months of detailed analysis and documentation assembled a picture of mining operations that likely unfolded over many generations. Carbon dating suggests the activity occurred between 12,000 and 10,000 years ago.

In Sagitario, the team found an alternative, chimneylike entry point that they suspect was used to access La Mina. Elsewhere, patches of charcoal and scorch marks on the ceiling revealed how the miners tried to light their workspace. Less clear is what people were doing with the ochre they mined.

Durable and striking, ochre is a natural pigment that has variously turned up in cave paintings, at burial sites and on ancient artifacts and structures around the world. It could have been used as a chemical agent to treat animal hides and, due to its high arsenic content, may have doubled as a bug repellent. In other words, Dr. MacDonald said, it’s possible to imagine all manner of uses.

For Dr. Reinhardt, what is most revealing about the discoveries is the evidence of planning, organization and accumulated knowledge that went into extracting the ochre from such difficult-to-access places.

Greg Hare, a recently retired archeologist with Yukon’s territorial government, has seen abundant examples of ochre on artifacts and at burial sites in the Northwest. He said the Mexican discoveries support the emerging picture of an early entry by people into North America, well before the end of the last ice age.

“To me, it suggests that this isn’t a pioneering population,” he said. The ochre miners would have more likely been part of “a well-established population that has already satisfied the basic needs of survival.”

Dr. Chatters, who is best known for excavating Kennewick Man, a 9,000-year-old skeleton discovered in Washington State, said the Mexican caves provide a startling glimpse at a long-vanished era, when the giant mammals known as megafauna were largely extinct but the region had not yet transitioned into the dense broadleaf jungle of today. Future work may reveal more about who those early inhabitants were and why they abandoned the caves long before water made the ochre completely inaccessible.

“We have a chance to find a lot more than we know now,” Dr. Chatters said.

He added that the picture of ancient people working out how to navigate a risky environment in order to access a precious resource is one people can still relate to.

“[Ochre] was like the gold of its time. It played such an important part in their lives that they would do anything to get it,” he said. “It shows we haven’t changed very much.”