When Jessica Dixon first heard about a 58-hectare quarry proposed for a patch of bush near Skeleton Lake and her farm, west of Huntsville, Ont., she began worrying about the sound of blasting and the dust kicked up by the operation.

But her main concern was the steady stream of heavy gravel trucks that would rumble by the home she shares with her husband and four young children. “It’s a busy and difficult road,” the 37-year-old Ms. Dixon said.

Although they benefit from considerable regulatory protections, quarries are rarely popular with their neighbours. In the past few years, several other contentious quarry proposals have been blocked or withdrawn, including the so-called mega-quarry proposed for Melancthon, a Niagara Escarpment mine whose opponents included musician Sarah Harmer, and others in Caledon and near Lake of Bays.

Quarries supply raw materials, such as sand and aggregate crushed rock used in concrete and ready-mix asphalt, for a broad range of uses, including public works, roofing, building materials and landscaping. According to the Ontario Stone, Sand and Gravel Association, about 280 mines, most of them in southern Ontario, produce almost 164 million tonnes of the aggregate used in the province each year.

In the Skeleton case, documents filed with the Township of Muskoka Lakes say that Mr. Lippa had sought an official plan amendment that would permit the quarry to produce up to 200,000 tonnes of crushed granite annually, with a life expectancy of up to 80 years. The property is about 1.7 kilometres north of Skeleton Lake. Through his Barrie, Ont.-based planning consultant, Mr. Lippa declined to be interviewed.

Property records show that he acquired the site in 2009 for $60,000, and initially sought municipal approval in 2012. According to Ross Earl, a retired school teacher who lives in the area, Mr. Lippa notified a handful of residents living within 250 metres of the site where he wanted to build the quarry. While that may have satisfied notification requirements, some residents say he should have cast his net more widely.

At the time, municipal officials told him to produce more impact studies, which took several years. Ms. Dixon said she heard about the plan in 2017, when the Skeleton Lake Cottagers Organization (SLCO) began lobbying to block it.

The 250-member group has hired former Ontario environmental commissioner Gord Miller to weigh in on the quarry’s own expert studies. Based on his findings and widespread opposition, the Township last summer unanimously turned down the application at a packed session. The Township of Huntsville council also voted against the plan.

The application hasn’t come before the council for the District Municipality of Muskoka, which is the regional body. However, its planners didn’t object to the presence of a quarry, provided the operator and the township implement development and traffic controls to contain the impact.

Mr. Lippa has appealed the township decision to the Ontario Municipal Board (OMB), which held a procedural session last month that attracted so many area residents that the hearing had to be moved to a larger space. A full OMB hearing likely won’t begin until next year. Even if the OMB approves the rezoning, Ontario’s ministry of natural resources and forestry must issue a licence to operate.

Besides truck traffic, the flash points in this case focus on mining-related phosphorous discharge into nearby water bodies, including Skeleton Lake, which, for geological reasons, is one of the cleanest and clearest in Ontario, and feeds into Lakes Muskoka and Rousseau.

Skeleton Lake is thought to have been created by a meteor strike, which explains its depth and shape. Unlike most Ontario lakes, Skeleton’s water contains virtually no mercury, because of a limestone crust on the lake bottom. As SLCO president Scott May said. “You can’t compare it to other Muskoka lakes.”

Phosphorous levels related to rock-dust runoff created by the mine will be more than 10 times higher than the lake’s natural state, Mr. Miller said, adding that the lake won’t be poisoned but the chemical loading will alter its biology and fauna. (Phosphorous loading, from substances such as fertilizer, is associated with algae growth and considered a problem for many recreational lakes.)

Mr. Flint said that because the largest purchasers tend to be municipal, regional and other government agencies that want access to inexpensive raw materials, provincial law has provided quarry operators with plenty of latitude.

Regulation dates to the 1960s, when gravel-mining firms carved a huge gap in the Niagara Escarpment, prompting changes that included new laws and strict land-use protections for the escarpment, a vast source of limestone aggregate.

The current Liberal government passed changes to the Aggregates Act, which require quarry operators to conduct more detailed studies on their proposed mines but also provide the minister with discretion to override local council decisions. But, as Mr. Flint noted, the changes have yet to be implemented because the government must still approve the enabling regulations.

From his days as an environment commissioner who was openly critical of quarry policy, Mr. Miller said that the laws still don’t compel operators to show that there is a need for the aggregate they’ll be producing.

Muskoka Lakes Township director of planning David Pink said the latest plan threw up red flags about wetlands in the vicinity of the quarry lands and also the impact of the sound of blasting on cottage owners and area residents. Muskoka Lakes Mayor Don Furniss added that there are two other established quarries in the area. “More aggregate is not something that’s a high priority.”

Toronto lawyer David Donnelly, who will be representing a coalition of people opposed to the plan at the OMB, said that the quarry operation affects both cottage owners and area residents, preventing them from enjoying their lakeside properties.

While the cottager and residents group will have standing at the OMB hearing, the Township of Muskoka Lakes will have to defend its decision. According to Mr. Donnelly and Mr. Flint, recent decisions against quarries have turned on distinctive environmental conditions, such as the impact on the habitat of the endangered Jefferson Salamander, which was the deciding factor in the fight fronted by Ms. Harmer. The SLCO’s Mr. May said he hopes Skeleton Lake’s unique hydro-geology will prompt the OMB to reject the application entirely, as has happened with a few other quarry appeals in recent years.

As Ms. Dixon said, “I’d like the whole thing to be gone completely.” 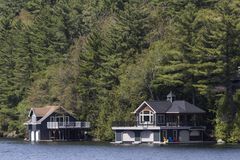 Ontario court halts quarry project over lack of consultation with First Nations
July 18, 2017
Follow us on Twitter @globeandmail Opens in a new window
Report an error Editorial code of conduct
Due to technical reasons, we have temporarily removed commenting from our articles. We hope to have this fixed soon. Thank you for your patience. If you are looking to give feedback on our new site, please send it along to feedback@globeandmail.com. If you want to write a letter to the editor, please forward to letters@globeandmail.com.
Comments are closed