An alleged conspiracy to send poison-laced letters from Canada to the U.S. White House also includes at least five letters that were mailed to Texas, according to the RCMP.

On Monday, it was revealed that a sprawling police probe, centred in Washington, D.C., and Niagara Falls, N.Y., also incorporates two other crime scenes more than 3,500 kilometres apart. One of them is in suburban Montreal, where police and soldiers in hazmat suits searched a condominium complex for clues. The other is in Hidalgo County, Texas, where justice-system officials say they also received potentially lethal letters.

Reports of letters containing the toxin ricin being sent from Canada to the White House first surfaced late last week. On Sunday, U.S. authorities arrested a woman at the Niagara Falls border-crossing in connection with the conspiracy.

Pascale Ferrier, a 53-year-old software developer living near Montreal, has not been officially accused in the case. But media reports say she is the suspect and charges are to be unveiled in a Buffalo court tomorrow afternoon.

U.S. President Donald Trump is mentioned in a Twitter account with Ms. Ferrier’s name, birthdate and business name. “I have a new name for Trump: ‘the ugly tyrant clown,’ ” says a post made on Sept. 9, before her arrest.

Public records show that Ms. Ferrier, who is a naturalized Canadian, had her Montreal residence seized by a mortgage lender months before she ended up detained in a Texas jail last year.

The administrators of the jail are now saying they were also being targeted by letters. “I can confirm that envelopes containing the deadly toxin ricin [were] mailed to me and three of my detention staff,” Hidalgo County Sheriff Eddie Guerra said on Twitter Monday. He added that “no injuries have been sustained.”

Ricin is a deadly chemical that naturally occurs in castor beans. The poison frequently surfaces in plots involving mailed letters.

In an interview, Hidalgo County District Attorney Ricardo Rodriguez said that his office recently conducted searches for ricin-laced correspondence on the advice of the U.S. Federal Bureau of Investigation – but no such letters were found.

“We took every precaution,” he said.

He was familiar with Ms. Ferrier, who he recalled being prosecuted on misdemeanor offences in the county in March, 2019.

She was arrested in Texas after she drove an RV motorhome there from Quebec. “An officer approached her at a park, and it was after-hours when the park was closed,” her defence lawyer Alberto Osorio said in an interview. “It just snowballed from there,” he added.

Mr. Osorio said his then-client was charged in 2019 with unlawfully carrying a nine-millimetre handgun and also having a fake driver’s licence. Yet she was never convicted of either offence, he said, because after several weeks of jailing her, Texas officials simply decided to deport her back to Canada.

Public records show that Ms. Ferrier has mostly been living in suburban Montreal. In her Facebook posts, she has voiced her unhappiness at corporate greed, warfare and environmental problems.

Originally from France, she obtained her Canadian citizenship in 2015, according to her résumé and her social-media posts. She worked for a Montreal company making software for the aeronautics industry but quit her job in the fall of 2017.

She filed for bankruptcy in June of 2018 and was sued the following month by First National. The mortgage lender got a court order to force her to surrender a condo in Laval because of her outstanding debts.

In October, 2018, she left for Texas by RV for what was supposed to be a six-month stay, according to a post on her professional Facebook page, La Techno-Créative Nomade. Her posts say she returned to Montreal in the summer of 2019, after her brush with the law in Texas.

On Sunday night, a woman was arrested crossing the Canada-U.S. border at the Peace Bridge Niagara Falls in connection with the ricin plot.

In the Montreal suburb on Longueuil on Monday, an RCMP squad backed by Canadian Forces soldiers searched a residence in a condominium complex. “Our Chemical, Biological, Radiological Nuclear, Explosives team (CBRNE) is leading the operation,” the RCMP’s Quebec wing said in statement posted to Twitter.

RCMP Corporal Melanie Cappiello-Stebenne says the crossborder investigation centres on five letters or packages shipped to Texas, in addition to the correspondence mailed to the White House.

Prosecutors are preparing to reveal charges in a Buffalo court on Tuesday at 4 p.m. 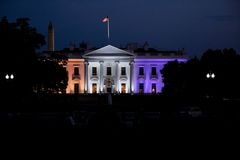 Follow Tu Thanh Ha and Colin Freeze on Twitter @TuThanhHa @colinfreeze
Report an error Editorial code of conduct
Due to technical reasons, we have temporarily removed commenting from our articles. We hope to have this fixed soon. Thank you for your patience. If you are looking to give feedback on our new site, please send it along to feedback@globeandmail.com. If you want to write a letter to the editor, please forward to letters@globeandmail.com.
Comments