An increase in teacher absenteeism and a shortage of supply teachers in Ontario has forced several school districts to take an unusual approach to filling the gap: They’ve hired non-certified emergency replacements to supervise classrooms.

School boards say the staffing issues come as university training programs in the province were extended to two years from one year, which means a smaller annual pool of newly certified teachers. They also say the last-minute scramble has been caused by higher absenteeism due to changes in sick-leave rules, an issue likely to be raised in teacher contract negotiations this fall. The policy no longer allows teachers to bank sick days until retirement, which some have said resulted in more sick days being used during the year.

“It was not going away and it was time for us to do something,” said Jim Vair, superintendent of human resources at the London District Catholic School Board.

The district posted the position of a temporary classroom support personnel this fall after having difficulty filling 2,100 daily jobs with supply teachers last year, which meant an increased workload for other teachers in the school. Candidates don’t need a teacher’s certificate. All that is required is a degree or diploma in a child- or adolescent-related field of study, previous experience working with school-age children and a criminal background check.

About 110 names were added to list. Half are student teachers from the nearby faculty of education. Mr. Vair said these non-certified instructors have been called into classrooms roughly 16 per cent of the time so far this academic year and only when the board couldn’t find a certified supply teacher.

“These staff come in and are so far working very well,” he said. “We know they are only being brought in when there is absolutely no teacher that is available.”

Jason Connolly, superintendent of human resources at the Waterloo Catholic District School Board, said over the course of a month, non-certified instructors, which includes student teachers, could be used 100 times to fill in for daily absences, or about 5 per cent of the time. He said the number of absences and the shortage of certified replacements is “something we’re definitely worried about.”

“We have diverted a lot of resources toward recruiting teachers, and on a daily basis, it kind of consumes a lot of the work we do here. We’re obviously taking it very seriously,” he said.

There are provisions in the Education Act allowing for an emergency roster of non-certified adults to manage classroom, if a certified teacher isn’t available. The practice is not uncommon in other parts of the country. In British Columbia, rural and remote districts use non-certified instructors for a limited period of time because of a shortage of supply teachers to fill in for absences.

The Toronto District School Board, Canada’s largest, has a healthy roster of supply teachers, said spokesman Ryan Bird, but the number of absences and daily positions being declined by supply teachers “can lead to challenging circumstances on some days.” The board has an emergency replacement roster and has had to use it, even though it was in rare cases, Mr. Bird said.

Adding to the problem, some school officials say, is that supply teachers sign on with several boards to make sure they get enough work. Bruce Campbell, spokesman for the Dufferin-Peel Catholic District School Board, said the increase in absenteeism, in combination with having to compete with other school boards for substitute teachers, can lead to incidences of unfilled assignments. His board will move students to another classroom for the day, and in some cases, use a non-certified replacement.

“It would be our hope that the province will examine this issue with a view to identifying the reasons why an increase in absenteeism has occurred, along with a provincewide strategy for decreasing absenteeism,” he said.

Kayla Iafelice, a spokeswoman for Education Minister Lisa Thompson, said in an e-mail statement that the government was aware some school boards were experiencing staffing pressures, “and we have been working with them to address these concerns.” She did not provide any specifics.

Liz Stuart, president of the Ontario English Catholic Teachers’ Association, said the last time she heard of a number of Ontario boards doing something similar was about two decades ago during a teachers’ shortage.

She acknowledged many school districts are in a difficult position. Some have even curtailed teachers’ professional development during the school day to ensure adequate staffing in schools.

“We will continue to advocate for the fact that we believe that we need to have qualified teachers in classrooms to ensure program delivery,” Ms. Stuart said. 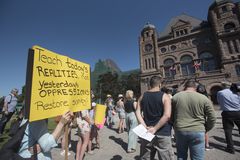 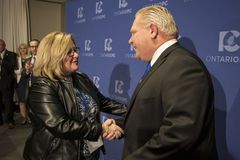