“Look up above the third-floor balcony and you’ll see it. Over the years they’ve done every possible thing they can to hide it – painted it over I don’t know how many times.”

Just below the roof line of the old Bala Bay Inn, there is a dark square in the red brick. It is darkened and splotched but if you concentrate very hard you can see, ever so faintly …

One of five swastikas that originally graced the old building. One story out of a book full of tales involving this small-town landmark, more than a few of them involving ghosts – one, some believe and some doubt, involving a secretive meeting between a president of the United States and representatives of European nations in the earliest days of the First World War.

Built in 1910 at the unheard-of cost of $20,000, E.B. Sutton’s all-brick Swastika Hotel was once state-of-the-art lodgings in Ontario’s Muskoka. Not surprisingly, the name of the three-storey hotel would change in the 1930s following the rise of Nazism (the Nazis appropriated what had been an ancient religious symbol in a number of world cultures). It would become Sutton Manor, later the Bala Bay Lodge, the Cranberry Inn and, finally, Bala Bay Inn.

The lodging business has long been brisk in this quiet little village where Lake Muskoka tumbles into the Moon River. Tourists come to visit the falls, currently a controversial local issue as the hydroelectric dam is under expansion, and to travel the extensive lakes system that has made this part of Canada world-famous.

This summer, as little Bala, Ont., celebrates its 150th anniversary, the 108-year-old inn is offering no accommodation to the thousands of former locals and tourists who will show up for the gala celebration today.

The hotel that once hosted such music icons as Louis Armstrong and the Dorsey Brothers is now called the Bala Bay Hostel and serves as housing for employees of the J.W. Marriott the Rosseau Muskoka Resort in nearby Minett.

The husband-and-wife team of Kim Ward and Chris Grossman were the hotel’s last proprietors, operating for nine years before shuttering it. They now operate the Nobleton Hotel in Fort Lauderdale Beach, Fla., where the season is considerably longer.

“We gave it our very best,” Ms. Ward says. “Four months is not enough time to make it in. She was a beautiful building that you could not help but fall in love with, but my pockets were just not deep enough.”

The glorious mahogany staircase remains in place, the tin ceilings are still there, and the restaurant where legendary musicians took meals while playing at Dunn’s Pavilion (big bands) or The Kee to Bala (rock) remains open, as does the Ghost Lounge.

That’s correct, “ghost” lounge, where E.B. Sutton lay in state for several days following his death in 1916. It is no longer possible to rent room 319, where Mr. Sutton died and where tapping has often been heard and televisions seem to turn themselves on and off.

There are no longer midweek evening tours in search of the ghost of “E.B.” Nor is there much discussion over what Woodrow Wilson was up to in the summer of 1914 when he may or may not have shown up here and may or may not have attempted to bring a swift end to what would become the deadliest war in human history.

Jack Hutton is the unofficial custodian of such stories. The long-time Toronto newspaperman and lifelong piano player – at 85, he still entertains on evening cruises of the Segwun steamship out of nearby Gravenhurst – is Bala’s biggest booster. Nearly 30 years ago he and partner Linda Jackson-Hutton discovered that Lucy Maud Montgomery, author of Anne of Green Gables, had set her only non-Prince Edward Island book (The Blue Castle) in Bala, where she spent part of the summer of 1922. Since then, they have turned the old tourist home where Mrs. Montgomery took her meals into the Bala Museum, which also serves as a popular “Anne” shrine and shop.

As a local columnist and historian, Mr. Hutton had long been amused by the ghost stories surrounding the Bala Bay Inn, which he takes with several grains of salt. On the other hand, he takes seriously, without taking one side or the other, a very particular story that lay buried for decades in the hotel register.

On Friday, Aug. 28, 1914, a visitor signed in as “Mr. Woodrow Wilson, Washington, D.C.” It was 24 days after Germany invaded France and Britain declared war. The United States was not then involved. Also registering that day were the Count and Countess von Bethmann Hollweg, a woman from France and a British expatriate couple from Argentina.

“Straight out of the pages of an Agatha Christie novel,” Mr. Hutton says.

He wrote a column suggesting that perhaps this end-of-season gathering was a quiet, out-of-the-way opportunity to bring together involved parties and a president eager to mediate.

“I absolutely believe it to be true,” Ms. Ward says. “In those days, Muskoka would have been the perfect place to fly under the radar.”

Obviously, if there was an attempt to cool matters, it failed miserably.

“I floated this,” Mr. Hutton says, “and I got crapped on. They said there was no record he was here.”

It was also pointed out to him that the president’s wife, Ellen, had died on Aug. 6 of Bright’s disease, barely three weeks earlier, and that Mr. Wilson and their daughters had been devastated by the loss.

There is evidence that Mr. Wilson’s family had holidayed in Muskoka. Mr. Hutton says that Mr. Wilson had purchased vacation property on Lake Rosseau’s Formosa Island.

“But things happened,” says Mr. Hutton. “He became president of Princeton [University] and then went into politics – and all of a sudden Muskoka sort of floated away …”

The story refused to die despite the denials. Fred Sutton, E.B.’s son, claimed to the very end that he had indeed met the president of the United States in late summer of 1914.

Bob Sutton, Fred’s son, unearthed the old register where Mr. Wilson’s name appears: “Mr. Woodrow Wilson, Washington, D.C.” The obvious question arises: If this was to be a secret meeting involving world order, why would the president of the United States sign his name at all?

“It does seem somewhat far-fetched,” says Andrew Hind, also a local historian and co-author, with Maria Da Silva, of Muskoka: Enchanting Stories from Ontario’s Cottage Country. “But Wilson did indeed cottage in the area."

“My only concern is that it seems unlikely minor diplomats from the warring nations would have had any ability to negotiate on the matter … I suppose it is possible they were trying to draft some preliminary agreement to hold talks. Knowing for sure would require some serious historical investigation so for now I think it should be considered speculative.”

The Swastika Hotel has long been lost to history. And now the Bala Bay Inn has joined it.

The truth, perhaps, has gone with them.

A perfectly framed Muskoka cottage, from the inside and outside
June 20, 2018 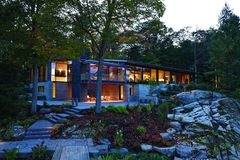 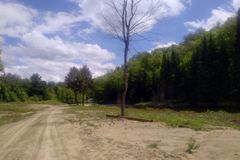 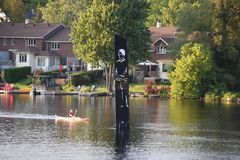