Since Ontario Premier Doug Ford was first elected four years ago, developers have paid tens of millions of dollars for a number of properties that include protected lands the province is now proposing to carve out of the Greenbelt.

Among those properties is a substantial piece of land lying largely in the Greenbelt that sold for $80-million in September, just weeks before the government revealed its new plan.

During the 2018 election campaign, Mr. Ford promised not to touch the Greenbelt – a vast arc of farmland, forests and wetlands across Southern Ontario. The pledge followed public uproar over a video that showed him saying he would allow housing development on a “big chunk” of the protected area. Again, in late 2020, he made a similar promise.

The Ford government reversed itself earlier this month, announcing plans to remove 7,400 acres from the Greenbelt for the construction of at least 50,000 new homes. At the same time, land elsewhere would be added to the Greenbelt that, the government says, would result in a net increase of 2,000 acres.

The proposal to open up the Greenbelt to development has sparked protest from environmentalists, agriculture advocates and land-use experts, who argue that swapping one piece for another may be ineffective, because land has different environmental values, and that this also paves the way for other developers to push for their properties to be removed from the Greenbelt.

The proposed carve-outs of 15 areas of land include at least nine properties that were bought by developers for $10-million or more – transactions that topped $300-million in total – since the Progressive Conservatives took office in 2018, property records show.

At least four developers who bought the properties the government is now proposing to remove from the Greenbelt have either donated to the PC Party, hired conservative lobbyists, or both.

The government defended the decision to open up parcels of Greenbelt land to development but did not address questions related to the developers.

“Ontario is in a housing-supply crisis, and our government is considering every possible option to get more homes built faster,” Victoria Podbielski, press secretary to Municipal Affairs and Housing Minister Steve Clark, said by e-mail.

On Nov. 4, the province announced 30 days of consultation on removing these lands from the Greenbelt. The province says owners would have to make “significant progress” on development approvals by the end of next year and begin construction by 2025 or the government would “begin the process” of returning those properties to the Greenbelt.

Since the announcement, The Globe and Mail has been examining property and transaction data, as well as corporate records, of the pieces of land Queen’s Park is proposing to carve out of the Greenbelt.

The Globe looked most closely at six of the province’s 11 maps of Greenbelt carve-outs, which together included 19 properties that had sold since the late 1990s. Of those, six properties changed hands between the Greenbelt being created in 2005 and the Tories taking office in 2018. Another 10 have sold since the 2018 change of government. Nine of these were to developers and numbered companies, most for large amounts, and the remaining one did not involve a corporate buyer.

east of Dufferin St and west of Bathurst St

Note: Numbers 4 and 5 are two properties

with the same address.

the globe and mail, Source:

east of Dufferin St and west of Bathurst St

Note: Numbers 4 and 5 are two properties

with the same address.

the globe and mail, Source: GOVERNMENT OF ONTARIO 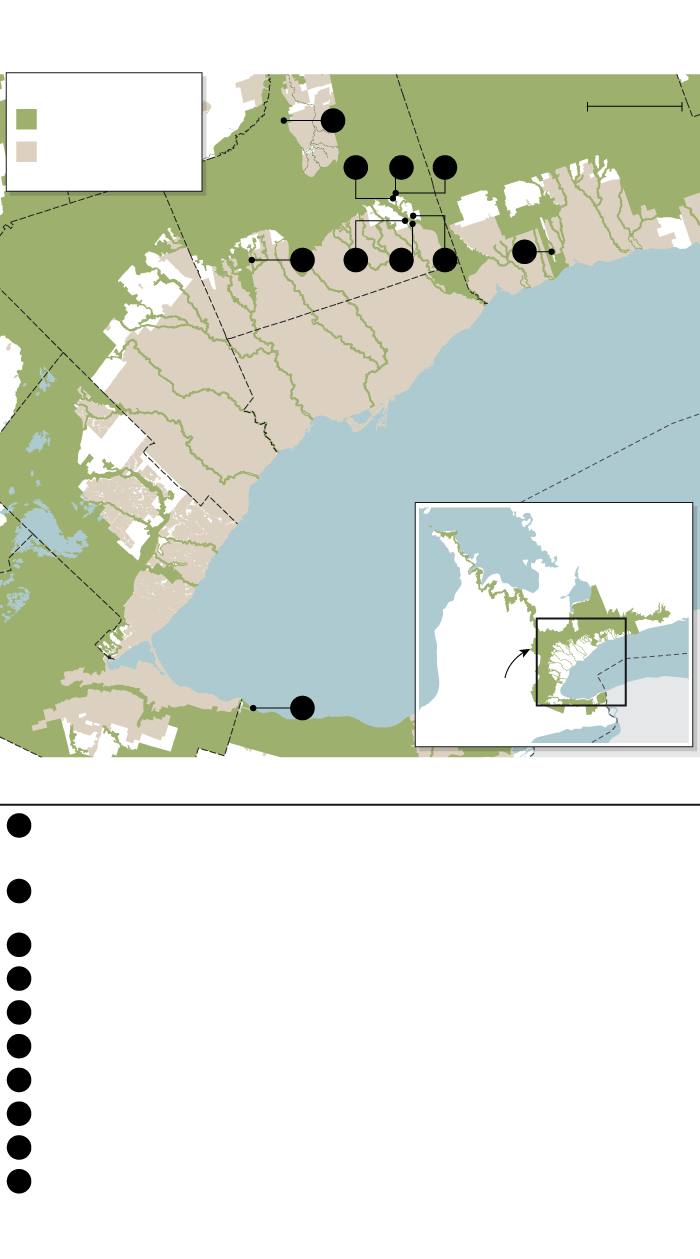 Sideroad, east of Dufferin St and

Note: Numbers 4 and 5 are two properties with the same address.

The Greenbelt is about 2 million acres of protected land, established in 2005 by then-premier Dalton McGuinty’s Liberal government, stretching across the Greater Toronto and Niagara areas. It was designed to protect farmland and environmental habitat while encouraging denser development by limiting suburban sprawl.

The plan for the greenbelt is part of a suite of recent announcements designed to accelerate home construction in a region with a housing-affordability crisis.

The Ford government has pledged to facilitate the construction of 1.5 million homes in Ontario over the next decade.

Mayors in Toronto and Ottawa have been given expanded authority, and could soon be able to pass bylaws with only one-third support on council. Conservation authorities have had their mandate reduced. And cities will no longer be able to levy development charges – which fund sewers, parks and other civic amenities – on certain kinds of housing.

Critics say that these measures undermine local democracy, threaten the environment and will deprive cash-strapped cities of hundreds of millions of dollars – without necessarily resulting in more homes being built.

Victor Doyle, a former provincial land-use expert considered the main architect of the Greenbelt, questioned why developers would have paid so much for land that was considered off-limits for development.

“It’s beyond belief,” said Mr. Doyle, who says the government’s plan will only encourage sprawl.

“It makes no sense to continue this massive outward growth, which the government has been pursuing with unbelievable vigour, undoing so much, and based on a big lie that we’re running out of land.”

Among the sales in the Greenbelt parcels up for potential development, the most recent occurred in mid-September, about six weeks before the government’s announcement.

On Sept. 15, a company controlled by developer Michael Rice bought the 280-hectare property in the Township of King for $80-million. The real estate agent who sold the property promoted it as a “prime land-banking opportunity,” referring to the practice of holding undeveloped land for future opportunities.

The property had previously traded hands in 2000 – before the Greenbelt protections were put in place – for about $9.3-million.

Mr. Rice did not respond to e-mails requesting comment.

Almost immediately after the government’s announcement, the local municipality threw its support behind allowing the land to be carved out of the Greenbelt so it could be used for a new hospital.

The local council passed a resolution just one business day later, saying the property owner is “committed to providing the necessary lands” for a new hospital “for a nominal fee.”

Township of King Mayor Steve Pellegrini said in a statement that “a discussion took place some time ago” with the property owner who “wanted to give back to the community by providing land” for a new Southlake Regional Health Centre site. Mr. Pellegrini said neither he nor representatives of the municipality discussed removing the 280-hectare property from the Greenbelt with the government.

The new hospital site requires up to 40 hectares, according to Southlake spokeswoman Lindsey Furlanic. She said officials will “evaluate this potential opportunity” after the province’s consultations.

Another high-value sale occurred in the spring of 2021, only five months after Mr. Ford’s most recent promise not to allow Greenbelt development. The property in Vaughan – which included protected land – sold for $50-million.

The buyer was TACC Developments (Block 41) Inc., which is controlled by prominent developer Silvio De Gasperis and members of his family. Property records indicate a loan of $100-million from CIBC at an annual interest rate of 21 per cent. TACC did not respond to requests for comment about the purchase and loan until after this article was published. The company later said in a statement that the loan for the purchase was $30-million at a rate of prime plus 75 basis points.

Company spokesperson Jenny Commisso said in the statement that the $100-million loan is for future development costs, rather than the purchase of the land, and she said recording a 21 per cent interest rate on the land title is a “standard bank practice.” Ms. Commisso said much of the land included in the purchase is already approved for development by the City of Vaughan.

One Greenbelt property changed hands after the 2018 election for only $2, and was subsequently used as collateral to borrow $15-million. Two sales included vendor take-back mortgages, in which the seller lends the buyer money for the purchase. One purchase was financed by a company that appears, based on its corporate profile, to be a wrecking yard.

Other buyers of these properties included a series of numbered companies, one named for the address of the land it bought and TORCA I Inc. and TORCA II Inc. The Globe reached out to executives or directors associated with all of these companies. All declined to comment or did not respond.

Two companies tied to Mr. De Gasperis hired former federal Conservative cabinet minister Peter Van Loan to lobby the Ford government about issues including land-use planning and development, according to Ontario’s lobbyist registry. Mr. Van Loan said in an e-mail that he did not lobby the government about removing land from the Greenbelt on behalf of Mr. De Gasperis’s companies.

Mr. De Gasperis is also a PC Party donor. Elections Ontario records show total donations of more than $17,000 to the PC Party since 2018 under variations of Mr. De Gasperis’s name. There were also donations to the Liberal Party under the same names.

As well, donors with the same names as several of Mr. De Gasperis’s executives and family members have donated tens of thousands of dollars to the PC Party.

Mr. Rice’s development company, Rice Group, hired Frank Klees, a former Ontario PC cabinet minister, between 2019-20 to lobby the government “on the economic development opportunities represented by a number of the client’s emerging projects,” the lobbyist registry says. The contract predated Mr. Rice’s purchase of the land in King Township. Mr. Klees did not return an e-mail seeking comment.

In addition, provincial records also show that a person with the name Michael Rice has donated more than $10,500 to the PC Party since 2018. This individual also donated money to the Liberals in 2018. As well, three donors with the same names as Rice Group executives have given the PC Party thousands of dollars since 2018.

Jack Gibbons, chair of the North Gwillimbury Forest Alliance, questioned why the province is “sacrificing” the Greenbelt. “It just doesn’t make any sense. The only people who will benefit from sacrificing Greenbelt lands are certain developers.”

Editor’s note: A previous version of this story referenced property records that showed a $100-million loan with a 21 per cent interest rate for a property purchased by TACC Developments (Block 41) Inc. While the company did not respond to requests for comment before publication, TACC provided a statement in January that said the loan for the purchase was $30-million with an interest rate of prime plus 75 basis points and that the $100-million loan referenced in the property documents was for "future development costs."