Some 800 Canadian military personnel fanned out across Quebec on Monday, filling sandbags and aiding evacuations as Premier Francois Legault warned that climate change will increase the frequency of serious flooding.

In Rigaud, about 70 kilometres west of Montreal, naval reservists used flat-bottomed Zodiac boats to survey the situation in low-lying areas, where the river had spilled across roads and blocked access to all but the largest of Canadian Forces vehicles.

As one boat motored on the Rigaud River passed chunks of ice and floating debris off the shores of what is usually a scenic neighbourhood, the reservists waved to people sitting on the porches of their now-isolated homes.

Sub-Lieutenant François Marquette said the naval reserves were called in on Sunday and are carrying out reconnaissance activities until they’re asked to take a more active role.

“We’re looking at how the situation evolves, and if civil society need support in terms of evacuations, we’ll see how we can support them,” he said.

While the river appeared to have risen by about 15 centimetres in the past 24 hours, he said most people didn’t appear panicked, and the situation remained under control.

Mr. Legault spoke to reporters Monday after visiting a Gatineau neighbourhood that has been flooded for the second time in three years. He said Quebec cannot “waste the money of Quebec taxpayers” on compensating people for flood damage, only to see the same properties flooded again two or three years later.

That is why beginning this year, flooding compensation will be capped by the province at a cumulative total of $100,000, after which the only aid available will be to help people move out of the flood zone. They will be eligible for up to $200,000 for a new home.

“We have to accept the evidence,” Mr. Legault said. “With the warming of the climate, there are events that are repeated more often than in the past, so we have to be able to adjust our programs, which is what we are doing.”

Gatineau Mayor Maxime Pedneaud-Jobin said some neighbourhoods might merit the investment to protect them from the increased risk of flooding. In cases where that is not possible, he questioned whether the current compensation offer would be enough to incite people to move.

“If we ask people to leave, they must leave with dignity, and that means with enough financial means to have a quality of life that would be equivalent elsewhere,” Mr. Pedneaud-Jobin said. “And for many people, $200,000 for a house is very limited.”

Back in Rigaud, the residents who remained in their homes seemed to be in good spirits, even as they used kayaks and small powerboats to reach houses that had turned into islands.

Luc Laperriere, a homeowner, said the last major flood, in 2017, is still on his mind. The damage his home sustained meant he had to move out for five months and contend with a nightmare of government bureaucracy for permits and compensation.

This time, he said he felt more mentally prepared after having sent his three large dogs away and moved his valuable equipment to higher ground. He said his home would be safe from flooding this year as long as the water doesn’t rise more than another foot.

While he can see himself moving eventually, he thinks it would be wrong to force his neighbours out.

“People who have been here 30 or 40 years can’t leave. It’s their home,” he said. He said people are getting better at protecting themselves from flooding and are attached to their homes.

“Relocating people like that, forcing them to lose the value in their homes, it’s unacceptable.”

The next street over, long-time area resident Louis Ouellette said having two major floods in three years is hard on residents. He said that before 2017, there hadn’t been a flood of this magnitude since 1974.

He had come to help his cousin and their neighbours, but he acknowledged that moral support might be all he could provide. “What can you do?” he asked, as he stood in ankle-deep water in front of his cousin’s house. “You can’t stop the river.”

Urgence Québec said Monday that six major floods were threatening Quebeckers, with 2,549 residences across the province flooded and more than 1,600 people forced from their homes.

“There will doubtless be more flooding to come,” Quebec Public Security Minister Geneviève Guilbault told reporters in Yamachiche, about 100 kilometres northeast of Montreal. “The weather, the temperature, the melting snow – and with a water level that is already high – what we can do is prepare the best we can.”

She thanked Canadian Forces members, who on Sunday had helped fill 4,000 sandbags and continued to provide help Monday.

Joining Ms. Guilbault in Yamachiche, Brigadier-General Jennie Carignan said there are now 800 military members on the job throughout Quebec. She said the soldiers are well trained for the work and are “very proud to be able to provide our support.”

Rigaud fire Chief Daniel Boyer said a light armoured vehicle was called in to help with the evacuation of a couple who required medical attention. He said the army vehicle was able to transport paramedics to the couple’s home and get them to safety.

Meanwhile, New Brunswick officials said Monday they are encouraged by the latest flood forecast, which has water levels stabilizing in the Fredericton area and on the upper reaches of the Saint John River.

Emergency Measures Organization director Greg MacCallum said that while the water remains above the flood stage of eight metres, levels are expected to “abate somewhat” over the next couple of days, barring any additional rain.

Still, Mr. MacCallum warned it’s not the time for people to let down their guard, as water levels continue to rise in areas south of Fredericton. 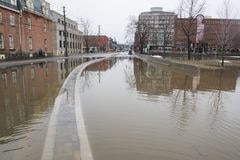 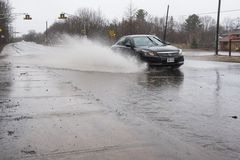 Quebec residents with homes in flood-prone areas could be forced out, Premier says 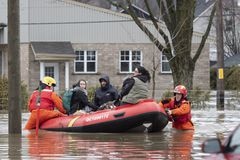