Judy Ferguson’s report, released Thursday, focuses on how patients at risk of suicide in communities including North Battleford, Meadow Lake and La Loche are treated at local health facilities.

For the past three years, the rate of suicide in those areas has been higher than the provincial rate, she said.

Those at risk of suicide, the report said, typically go to emergency rooms or use mental-health outpatient supports, but staff don’t always properly screen or assess them.

Ms. Ferguson found cases where patients who had attempted suicide by overdosing went to emergency departments and weren’t always referred to a psychiatrist before being discharged. Her report cites research that indicates those who see a psychiatrist after attempting suicide are at a lower risk of trying again.

“What we found is that some staff had received no training because … the timing of the training is so infrequent,” she said.

But part of the issue, Ms. Ferguson added, is smaller communities see more staff turnover in the area of mental health and positions sit vacant.

“Everybody knows everybody and I think that makes it even harder. It makes it more personal,” Ms. Ferguson said.

The report comes as Indigenous leaders in Saskatchewan call for more long-term solutions to deal with what one chief has called a suicide crisis.

Ronald Mitsuing of the Makwa Sahgaiehcan First Nation at Loon Lake, about 360 kilometres northwest of Saskatoon, met with provincial ministers recently after three people died by suicide, including a 10-year-old girl, and eight people attempted to take their own lives in a span of several weeks.

Minister of Rural and Remote Health Warren Kaeding said the government accepts the auditor’s report and work is under way on some of the recommendations.

“We’re certainly putting new staff into our northern communities,” Mr. Kaeding said. “And I think it’s just incumbent on us to make sure that they have the proper tools in all aspects of health care, not necessarily just with suicides, but in all aspects.”

Opposition NDP Leader Ryan Meili said the Saskatchewan Party government is unwilling to adopt his party’s bill to create a suicide-prevention strategy, which he said would help fill some of the gaps identified in the auditor’s report.

Ms. Ferguson also noted in her report that patients who are signed up to see a psychiatrist through a video teleconferencing service are regularly not showing up.

In 2017 and 2019, the rate of patients who missed scheduled appointments was 50 per cent, the report said. As a result, Ms. Ferguson recommends the health authority try to identify any barriers to using the service, which she calls cost-effective and timely.

“People who are more highly trained are in the larger centres and it’s in the smaller centres that need to have access to those services.” 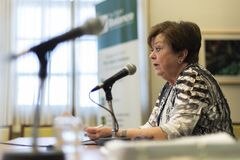 Saskatchewan First Nation in suicide crisis, leaders want prevention plan
Report an error
Due to technical reasons, we have temporarily removed commenting from our articles. We hope to have this fixed soon. Thank you for your patience. If you are looking to give feedback on our new site, please send it along to feedback@globeandmail.com. If you want to write a letter to the editor, please forward to letters@globeandmail.com.
Comments