An experienced defence lawyer says a Saskatchewan judge’s attendance at an Indigenous demonstration after he ruled on it could expose the court to potential allegations of bias.

Michael Spratt says it’s unusual for judges to have contact with one of the parties in a case that either could end up before them, or has already. Judges act as independent arbitrators and a perception of bias may undermine a court decision and the principle of impartiality, which forms trust in the system, he said.

Court of Queen’s Bench Justice Graeme Mitchell appeared Sunday at a closing ceremony for a 24-year-old Métis man, whom he ruled was allowed to stay on the provincial legislature’s lawn to finish a hunger strike over high suicide rates.

Justice Mitchell dismissed the government’s bid to remove Tristen Durocher’s tepee and found the bylaws that prohibit overnight camping on the Regina grounds infringed on his Charter rights as an Indigenous man.

During his stop at the camp, the judge spoke to the Mr. Durocher and accepted a Métis sash from a supporter. Some people there praised Justice Mitchell for his appearance and celebrated his decision.

While issues of reconciliation are important and judges are trained to put their personal views aside before making decisions, Mr. Spratt said Justice Mitchell’s presence at the camp could serve as grounds for an appeal by the province.

“These actions, although potentially not inappropriate, may leave the court open to allegations of bias or an appearance of bias,” the Ottawa-based lawyer said in an interview Monday.

The Saskatchewan branch of the Canadian Bar Association declined to comment, saying the issue is still before the courts.

Justice Mitchell released his decision last Friday, two days before Mr. Durocher’s fast was to conclude. He told those in court that he planned to release a longer ruling later.

In his decision, Justice Mitchell wrote Mr. Durocher’s fast “represents an admittedly small and personal attempt to encourage all of us to move a little further along in our national journey” towards reconciliation.

He also gave the provincial commission operating the Regina grounds six month to craft new bylaws, because the current ones don’t allow for “constitutionally protected political and spiritual expression.”

A spokeswoman for the Saskatchewan courts said it would not be appropriate for Chief Justice Robert Richards to comment on Justice Mitchell’s visit to the camp, as Chief Justice Richards presides over the Court of Appeal and there is the possibility of an appeal.

Saskatchewan Ministry of Justice spokeswoman Marieka Andrew said in a statement that the office is reviewing the ruling and it has 30 days to decide whether to appeal.

“The issue of some concern here is the fact that these parties were just before the judge and he still has yet to release ... a full written ruling,” Mr. Spratt said.

But it could be tough, he said, if the government chooses to appeal solely on because of Justice Mitchell’s visit to the site. Lawyers could also look at the decision and find other grounds for appeal, depending on what else was said in court, he said.

Mr. Spratt added that it would be a disservice to exclude judges from having a position or showing support for an issue.

“This is an issue of reconciliation of Indigenous protest and a very important conversation that needs to happen in Canadian society.”

Judge drops by protest camp at Saskatchewan legislature that he ruled on last week
September 13, 2020 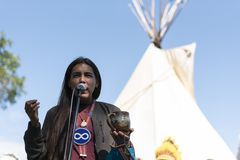