Saskatchewan Party Leader Scott Moe spent another day on the campaign trail Wednesday answering for his past – this time for a stayed impaired driving charge from 1994.

At a campaign stop in Regina for the Oct. 26 provincial vote, Mr. Moe revealed he had been charged with impaired driving and leaving the scene of an accident when he was 20 in his home community of Shellbrook, Sask.

“I was innocent,” he said after an announcement promising $4.6-million worth of supports for diabetics.

Mr. Moe has other infractions on his driving record.

In 1997, he was ticketed for failing to come to a complete stop and driving without due care and attention in a collision in which a woman died. Five years earlier, he was convicted of impaired driving when he was 18.

“This is not who I am. This is part of who I was,” Mr. Moe said Wednesday.

When asked if he had been drinking alcohol before getting behind the wheel in the 1994 accident, Mr. Moe said: “I had that day, but I was innocent of the charges.”

He had never before publicly disclosed the 1994 charges. NDP Leader Ryan Meili called that concerning.

“The Premier keeps saying this election is about trust and I think he’s right. And I think it really is important to be open and clear with the people of Saskatchewan,” he said at a campaign stop in Moose Jaw. “Now, Mr. Moe has, I think, quite a lot more questions to answer.”

Mr. Moe explained he kept the previous charges private because there was no conviction. He said he was coming forward now because of the campaign. However, he also suggested someone else might have planned to release the information.

“We have been made aware that there are some politically motivated organizations that are reaching out,” he said. “I expect that this will become public, and if it is going to become public, it should be me that provides it to the people of this province.”

Over the past 48 hours, Mr. Moe has been dealing with mistakes from his past making their way back into the public eye.

The sons of Jo-Anne Balog, the 39-year-old woman who died in the 1997 crash, spoke earlier this week about the impact her death has had on their lives, and their feelings that Mr. Moe has not been properly held accountable.

Mr. Moe addressed the fatal collision again on Wednesday. He said he had breakfast with his grandparents that May morning and was heading to a farm along a grid road, but didn’t stop before crossing the highway.

“I have reached out to my family again the last couple of days and I think everyone understands that this is an incident that is deeply personal to me.”

He said he plans to apologize directly to the Balog family after the campaign and wants it to be meaningful.

Mr. Moe said there are reasons why he has never apologized before, despite the collision happening more than 20 years ago.

Mr. Moe is one of six Saskatchewan Party candidates running in the election who have impaired driving convictions.

The most recent is from 2016, when former deputy premier Don McMorris pleaded guilty to drunk driving. Court heard he was driving a government vehicle erratically through a construction zone outside of Regina. His blood alcohol level was more than twice the legal limit.

The NDP disclosed that five of its candidates also have impaired driving convictions, and one was convicted of dangerous driving causing bodily harm.

Saskatchewan has struggled with some of the highest rates of impaired driving among the provinces and the government had brought in tougher penalties to tackle the issue. 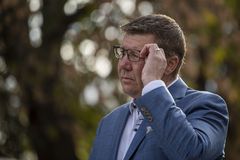 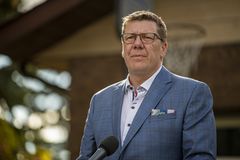 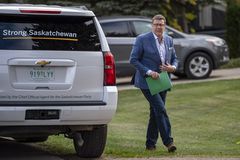