The president of the Saskatchewan Union of Nurses is calling for a two-week shutdown of certain businesses to give the health-care system some time to manage a recent increase of COVID-19 infections.

Tracy Zambory says members are worried because intensive care units in Saskatoon – where many of the new cases are located – are running at 130 per cent capacity.

“There needs to be a circuit-break for at least two weeks so we can get caught up on the contact tracing, the testing. We can have some relief in intensive care units,” she told The Canadian Press on Monday.

“We’re talking about places like bingo halls, like gymnasiums, like nightclubs and bars. Let’s look at a two- to three-week complete shutdown of those hot spots.”

Health officials reported 181 new cases Monday and said 68 people were in hospital, six more than the day before.

Sixteen people were receiving intensive care, seven of them in Saskatoon, which has 23 ICU beds.

The Saskatchewan Health Authority has said that, based on the test positivity rate, it’s preparing for more people to be hospitalized and to need intensive care over the next couple of weeks.

Some of the busier ICUs in Saskatoon are diverting patients from outside the city to intensive care units in a different location.

“Where the patient is diverted will depend on a number of factors, including the patient’s specific needs, as well as where capacity exists in the system,” said health authority spokeswoman Amanda Purcell.

Zambory said she knows of at least one patient who was sent to Regina. She believes diversion creates its own capacity issues because other units are already busy treating patients, not only for COVID-19, but for other serious conditions.

Testing and contact tracing is falling behind at a time when their capacity needs to be expanded, Zambory added.

“Part of what that circuit-break would do is give some respite so we could get caught up.”

Premier Scott Moe said his government was considering additional public-health measures and was to make an announcement Tuesday.

New measures announced last week took effect on Monday, including an alcohol curfew in bars and restaurants and an expansion of mandatory masks in public indoor spaces to all communities with at least 5,000 people. Face coverings were already required in Regina, Saskatoon and Prince Albert.

Rules have also been tightened for how many people can participate in fitness classes, and schools with more than 600 students have been recommended to reduce in-class learning.

The only activity prohibited under the new public-health measures: the use of hookahs and water pipes in lounges.

Hundreds of doctors from across the province have warned the steps will fail to stem the rise in cases. On Friday, they signed a letter calling for bingo halls, gyms, bars and places of worship to close for 28 days.

The physicians also want a shutdown in regions experiencing outbreaks and for mandatory masks to be required in all indoor public areas.

In Fond du Lac in northern Saskatchewan, which has a population of about 1,000 people, 37 people have been infected and 207 direct contacts are isolating and monitoring for symptoms, said a statement from the Fond du Lac Denesuline Nation.

Its first case was reported only last week.

“The virus is spreading so fast we are overwhelmed by what steps to take next,” said Diane McDonald, the reserve’s COVID-19 co-ordinator.

The community, which was also put under a boil-water advisory last week due to problems at its treatment plant, has banned non-essential travel.

He said more action needs to be taken immediately to prevent Saskatchewan from following the path of Manitoba and Alberta, provinces dealing with a surge of infections.

“What (Moe’s) been telling people is that he’s not going to allow any further lockdowns,” Meili said.

“We’ll see what he actually does, but if we look at his leadership these last few weeks it’s pretty embarrassing.” 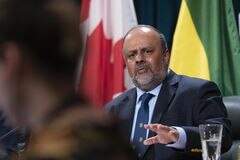 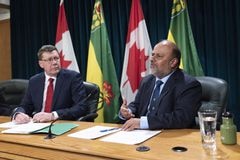 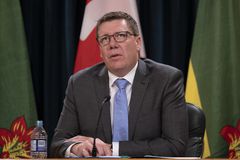