For four days, RCMP chased across Saskatchewan for Myles Sanderson, the suspect in Sept. 4′s stabbing rampage. When they found him, stuck in a stolen vehicle that veered off the highway in a high-speed chase, he died soon after.

How did that happen? Why did Mr. Sanderson also kill his brother Damien, whose body was found on the James Smith Cree Nation that the two were members of? And how will people there find closure after one of the worst mass killings in Canadian history?

Two public inquests, announced by Saskatchewan’s chief coroner on Sept. 21, will seek answers to those questions. One will focus on the 11 deaths at James Smith and the nearby village of Weldon, another on how Myles Sanderson died. Chief Coroner Clive Weighill says he aims to have all-Indigenous juries on the inquests, which might get under way next spring or summer. Until then, here’s an overview of what we know.

About the Sanderson brothers and their deaths

The RCMP’s four-day pursuit of Myles Sanderson, 30, ended in a highway chase on Sept. 7 near Rosthern, Sask., about 130 kilometres from the James Smith Cree Nation, where the stabbing rampage began four days earlier.

Mr. Sanderson was arrested after he drove a stolen vehicle off Highway 11 into a ditch, but he went into “medical distress” shortly thereafter, RCMP Assistant Commissioner Rhonda Blackmore said at a Sept. 7 news conference.

Police performed “life-saving” measures until paramedics arrived, she said, and EMS then drove him to a Saskatoon hospital, where he was pronounced dead.

Myles Sanderson’s history of crime stretches back 20 years, according to parole documents reviewed by The Globe and Mail. He had served time in prison for offences committed in 2017 and 2018, including a rampage at his common-law partner’s home; a robbery at gunpoint; attacking two men with a fork and beating a passerby unconscious; and assaulting police at his partner’s house.

He had served two-thirds of his sentence and was placed on statutory release but stopped reporting to his parole officer this spring. Police have been looking for him since May.

Damien Sanderson, 31, was initially deemed a murder suspect but the RCMP changed its position on Oct. 7, saying Myles Sanderson did all the killing – including Damien, who was found dead at James Smith on Sept. 5. The RCMP said Damien may have helped plan the initial attacks, but that was still under investigation.

The Mounties also said that, early in the morning on Sept. 3, they had been looking for Damien in connection with a reported truck theft. When they found the truck at a house on the First Nation and questioned people inside, Damien was there, but gave a false name. Some survivors’ families have questioned whether the massacre might have been prevented if the theft was more thoroughly investigated, but Assistant Commissioner Blackmore calls that “pure speculation.” 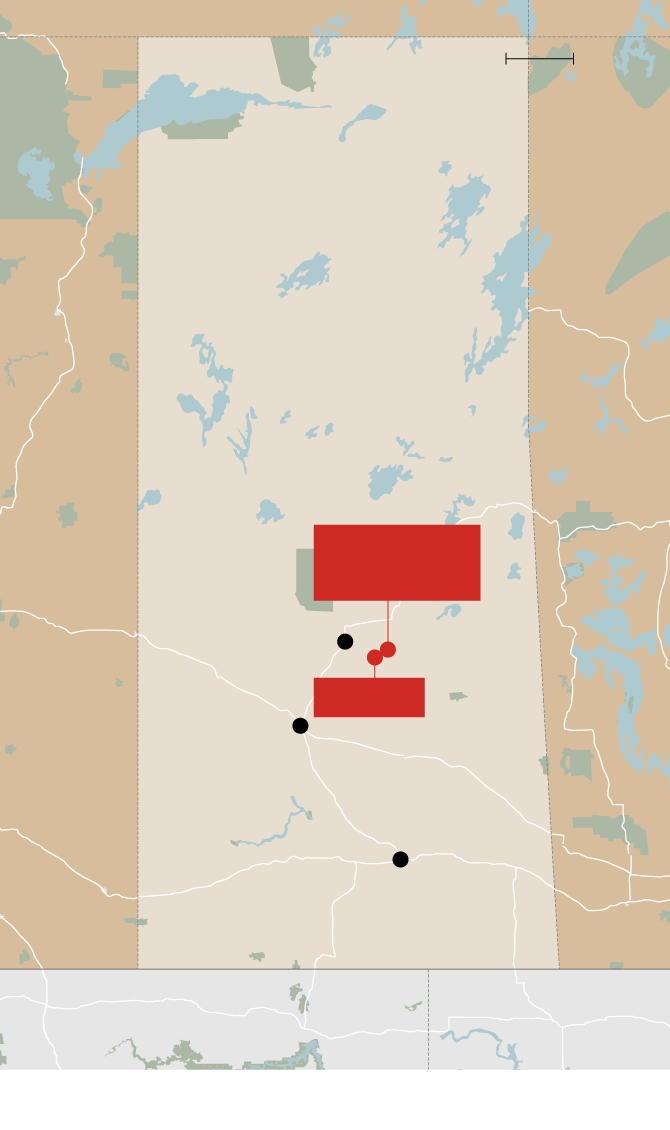 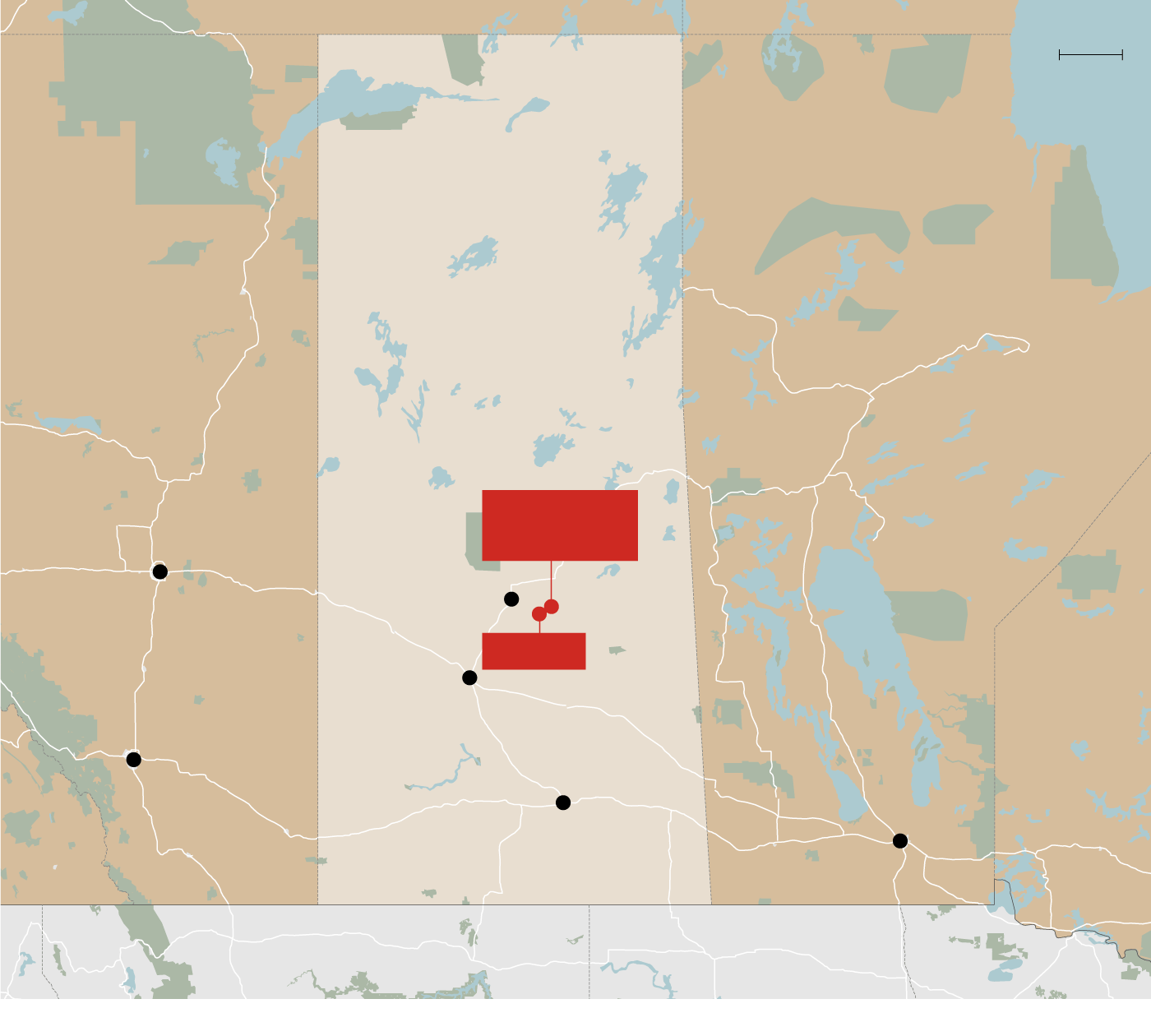 Where the stabbings took place

The Saskatchewan stabbing rampage reportedly began early on Sept. 4 at the James Smith Cree Nation northeast of Saskatoon, home to about 3,400 people, and in Weldon, a nearby village of 200. All told, 10 people were killed and 18 injured by knife attacks in various locations, local Mounties said.

Timeline of the Saskatchewan stabbings

The RCMP got multiple calls from James Smith Cree Nation about the stabbings around 5:40 a.m. Via social media and the provincewide dangerous-person-alerts system, the RCMP warned the public about the manhunt in progress.

Regina Police Chief Evan Bray says in a video posted to Twitter at 7:36 a.m. that the suspects are at large despite “ongoing, relentless” efforts of officers overnight. RCMP confirm at 11:39 a.m. that the fugitives are charged with first-degree murder, attempted murder and break and enter; Mounties also revise the number of injured to 18 from 15. RCMP confirm at 1:17 p.m. that the body of one of the suspects was found in a grassy area at James Smith. Police later say his wounds were not self-inflicted and his brother is still at large.

RCMP issued an alert at 11:45 a.m. that Myles Sanderson may have returned to James Smith. It advised people in the area to find shelter or stay in place if they were safe. At about 2:30 p.m., a contingent of police vehicles left the First Nation; soon after, an updated alert said further investigation had determined Mr. Sanderson was not in the area.

A 911 call at 2:07 p.m. reports a break and enter in Wakaw, a town southwest of James Smith. The caller said they believed a person seen outside the house was Mr. Sanderson and that he had a knife. Mr. Sanderson fled in a stolen vehicle, a white Chevrolet Avalanche; police sent an emergency alert and got several reports of sightings of the truck.

South of Rosthern, with police vehicles and a helicopter in pursuit, Mr. Sanderson apparently lost control of the truck and swerved across the divided Highway 11, according to a witness who spoke with The Globe. After the truck landed in a ditch, police closed in and arrested him around 3:30 p.m. The timing of his death after the arrest is not yet clear; police did not confirm the death until a news conference Wednesday night.

Saskatchewan authorities released the names and ages of the 10 dead on Sept. 7. Except for elderly widower Wes Petterson of Weldon, all were from James Smith. The Mounties did not identify the 18 injured but confirmed that one was a teenager and the rest adults.

Reaction in the community

James Smith Cree Nation is now in mourning after one of the deadliest mass killings in Canadian history. Chiefs and councillors of the nation – comprising three communities, including the Chakastaypasin Band and the Peter Chapman Band – declared a state of emergency Sunday night and set up two emergency operations centres for residents.

In Prince Albert, shortly after Myles Sanderson was apprehended, James Smith’s Chief Wally Burns spoke at a candlelight vigil. “We’re still in shock,” he said. “The words that I want to say don’t want to come out. A lot of us are impacted in a very sad way.” He said the community must now move forward while remembering the lives lost and by acknowledging that the attacks will have a lasting impact on young and future generations.

The Métis Nation-Saskatchewan has said it will provide crisis and grief counselling for Métis and First Nations families in Weldon and the neighbouring community of Kinistino, as well as supporting efforts at James Smith. The Saskatchewan government has also deployed victim services to the communities.

The James Smith Cree Nation is accepting donations at the nearby Bernard Constant Community School. In Prince Albert, the Bernice Sayese Centre is encouraging people to donate supplies such as paper plates, hand soap, meat, potatoes and bottled water to be delivered to James Smith for upcoming funerals. And family members of Bonnie Burns and Gregory Burns have established an online fundraising campaign in their memory, to support Ms. Burns’ surviving children. An earlier fundraiser for victims collected more than $120,000.

Watch: Rural Saskatchewan residents describe how the stabbing attacks have hurt their communities.