The Saskatchewan government is suspending team sports for the next three weeks and slashing capacity limits for public venues to 30 people in its latest attempt to curb the spread of COVID-19.

Premier Scott Moe announced the new health measures Wednesday by video from his home in Shellbrook, Sask., where he was isolating after eating at a restaurant where someone infectious had been.

Moe, who has yet to receive his test results, acknowledged that previous restrictions – including a recent provincewide mask mandate and a five-person restriction on home-based gatherings – haven’t been enough to slow the illness or reduce hospital admissions.

“Had they allowed us to take a sharp downturn in our transmission rate we wouldn’t be out here today with additional measures to ensure that we can achieve that,” he said.

Health officials reported 164 new cases of COVID-19 on Wednesday and said hospitalizations had risen to 111, with 19 people in intensive care.

The premier said the province’s seven-day average of 214 daily cases is too high.

Moe repeated that he wants to avoid closing down non-essential businesses, such as gyms and casinos, in favour of public-health rules that target specific sectors and activities where transmission of the novel coronavirus is occurring most.

As a result, all team sports across amateur and recreational leagues, including hockey, curling and dance, are to be suspended starting Friday until Dec. 17.

Athletes and dancers 18 years old and younger will still be able to practise in groups of eight if masks are worn and participants stay at least three metres apart.

The Saskatchewan Junior Hockey League responded within hours of the announcement. It said it plans to suspend games after Friday until after Christmas.

Shahab said that over the past few weeks transmission in sports was “becoming so frequent” that multiple cases were making it into schools and workplaces.

The three-week pause on team athletics may not only slow transmission in that setting, he said, but also impact the virus’s movement in essential workplaces and in-class learning.

The government is also expanding its mandatory mask rule to include indoor fitness activities and is limiting to four the number of people allowed at a table in a restaurant or bar.

Capacity at casinos, bingo halls, arenas and movie theatres will be capped at 30 people. The limit will also apply to conferences, worship services, funerals and weddings.

“These are by no means half measures,” Moe said. “The measures here today are substantial. They will have an impact.

“Our worship services, reducing their services to 30 people, is by no means not a sacrifice.”

The premier said his government tried to minimize the economic hit businesses will take because of the added restrictions by consulting with industry first.

No decision has been made as to how the government will support businesses that do feel some impact from the latest measures, Moe added.

“Scott Moe is telling businesses to stay open and their customers to stay home,” he wrote on Twitter.

“Now is not the time to be cheap, to guard the public purse while people struggle.” 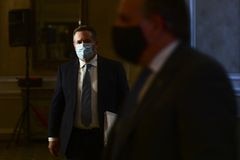 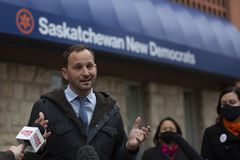