Several school boards fear that the loss of teaching jobs over the next four years will be much higher than the Ontario government’s estimates, based on their own calculations.

The Ministry of Education said in a memo to directors of education this week that an estimated 3,475 teaching positions will be lost in the province through attrition as a result of changes to the average class sizes in some elementary grades and in high schools. That works out to less than one teaching position for each of the province’s almost 5,000 publicly funded elementary and secondary schools.

Rory McGuckin, education director of the Toronto Catholic District School Board, said the ministry’s estimate appears to be on the “lower side.” In high schools alone, his board is projected to lose about 350 teaching positions over four years. Mr. McGuckin said it will result in fewer choices in elective classes, such as art classes, and force guidance counsellors to direct students to other courses.

“It would seem to me that the numbers that were released by the province … may not be reflective of the entire picture,” Mr. McGuckin said in an interview on Friday.

TDSB chair Robin Pilkey said several boards have high projections on job losses, and “I would be curious how that number [from the province] was calculated."

She added: “Our number has not changed, and hopefully for transparency’s sake I would hope they would share it.”

A spokeswoman for Education Minister Lisa Thompson said school boards may be failing to consider other factors in their projections. The government, for example, is providing some funds to help boards keep enough teachers for STEM (science, technology, engineering and mathematics) subjects.

“Their approach does not take into consideration attrition protection and other factors such as enrolment growth over the four years,” Kayla Iafelice said in an e-mail statement on Friday.

Ms. Thompson recently announced a number of changes to the education system, including a requirement that new teachers complete a math content knowledge test before being certified. Among the most significant is that average class sizes would increase by one student in grades 4 to 8, and from 22 to 28 students in high school.

In a statement on Friday, Ms. Thompson said that teacher salaries and benefits have increased while students fall behind in subjects such as math. “Despite what unions say, their priority has not been student success and as a result our province’s math scores are dropping and our students find themselves falling further and further behind,” she said.

The memos from the ministry this week said the plan will save about $851-million over four years.

Teachers’ unions have objected to the proposal for increased class sizes and also the government’s plan to mandate four online courses for high-school students.

Thousands of students walked out of school on Thursday to protest the changes, prompting Premier Doug Ford and Ms. Thompson to accuse teachers’ union leaders of orchestrating student walkouts.

Education unions, however, said they were not involved, and are organizing a rally at Queen’s Park on Saturday.

Several school boards have warned that the class-size changes in high school will mean the loss of elective courses that require small groupings of students, including auto shop.

NDP education critic Marit Stiles said on Friday that larger classes will mean that students who need more attention would fall behind.

Asked about the ministry’s projections of about 3,475 fewer teachers over the next four years, Ms. Stiles said she thinks the number is a lowball one.

“I think that those numbers are, I would say, conservative, from what we’re hearing from boards,” Ms. Stiles said, adding that mandated online courses for high school will also mean needing fewer teachers. “Boards have not moved away from their estimates of what the impact of these cuts are going to mean.”

“We’re waiting to see exactly how this plays out. But at the end of the day, what we do know is: Thousands fewer teachers in classrooms; thousands fewer adults helping support our students in the classroom; and fewer supports overall for students.” 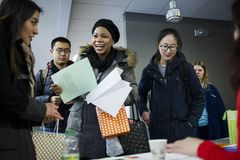 Program for future teachers in Ontario aims to boost math skills with lessons in coding
April 1, 2019 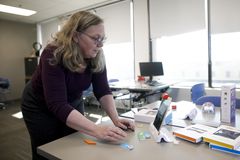 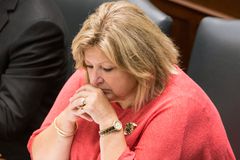