Classrooms across Canada can borrow sets of Second World War artifacts and reproductions in the second instalment of a popular learning tool provided by the Canadian War Museum.

The Canadian War Museum launched its “discovery boxes” at Bayside Middle School in Saint John, N.B., on Wednesday, following up on a similar project involving items from the First World War.

Boxes booked through the museum’s Supply Line program contain clothing, wartime art and photos and other artifacts, as well as lesson plans that explain the contents.

Many of the clothing items, including a Mark II helmet, an army battle dress jacket and a woman’s head scarf worn in a factory, are reproductions, but some authentic artifacts are included in each box, such as an emergency ration kit and a camera specific to the period.

Kathryn Lyons, the museum’s manager of visitor experience, oversaw the development of the Second World War box. She said the program aims to bring the tactile learning experience of the museum to kids who may not be able to visit.

“There is something about being able to touch objects, being able to feel history in a way that you don’t necessarily get to when you’re reading it on a page,” Lyons said in a phone interview.

After Wednesday’s school launch in Saint John, Lyons said she was impressed by how the Grade 7 students were intrigued by the discovery box contents. One student shared a story about a relative’s wartime service, and another imagined the possible back story of an original piece of sweetheart jewellery, which would have been worn by a serviceman’s loved ones.

“The power that objects have to grab attention, to generate questions, is amazing,” Lyons said.

Online course material expands on the war efforts of Canada’s army, navy and air forces, the roles of women and children, wartime jobs, the story of the Holocaust and the country’s internment of Japanese Canadians.

Items in the boxes and accompanying photos were selected to reflect the diversity of Canadians’ wartime experiences, something Lyons said teachers across all grade levels expressed interest in after the First World War boxes launched in 2014.

“It can be hard to look at a helmet and imagine that that helmet could have just as easily been worn by an African-Canadian civilian volunteer in Halifax … as it could have been by a French-Canadian soldier serving in Europe,” Lyons said.

“We have the objects and we’ve supplemented them with those photos that show the object being used, show a diversity of circumstances and people and personalized it even further with personal stories.”

Teachers can book one of 20 bilingual kits, aimed at students in Grades 4 and up, for two weeks at a time.

The museum says kits are fully booked this fall, but reservations for the winter term will open on Nov. 1. Online teacher resources for the Supply Line program are available on the Canadian War Museum’s website.

Thirty of the First World War discovery boxes are also available for classroom use.

In a Wednesday news release, the museum said the First World War boxes have been borrowed more than 1,975 times since 2014. 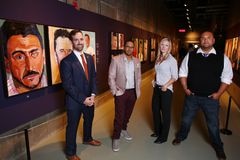