On a normal spring day, dozens of people would be tromping the maple-forest trails, amid the gurgle of sap running in tubes, back to this rural Quebec sugar shack.

They would be working off the maple-soaked feast they just consumed in the dining hall of La P’tite Cabane d’la côte, a convivial noisy brunch shared among a big crowd of family and friends.

Instead, for the second year in a row, there’s no cabane à sucre experience for the vast majority of Quebeckers. Chairs and tables are stacked inside La P’tite Cabane.

From the archives: As maple syrup season nears, Canada’s sugar shacks improvise to get products to consumers

Denied serious revenue for a second season in a row, these sugar shacks are hanging by a thread, resorting to takeout business and appeals to heritage to hang on to a fraction of their normal customers.

On this day, instead of the crowds, three children and their two parents are on their own as they wander the trails awaiting their boxed maple meal of eggs, ham, maple-syrup dumplings known as grand-pères, pancakes, pork rinds and anything else that can be soaked in syrup.

The boxed takeout is part of an initiative called Ma cabane à la maison designed to bring a bit of revenue to operators, and to make sure Quebeckers don’t forget the tradition.

Inside the cabane, one person prepares containers for the new takeout business they hope will save a tiny industry and slice of Quebec history from extinction.

“The objective right now is survival,” said Simon Bernard, owner of La P’tite Cabane d’la côte near Mirabel, just northwest of Montreal. “Last year was a total flop. This year, we’re trying some things to at least stay on the radar.”

Quebec’s iconic maple-syrup industry, which produces 92 per cent of the world’s supply, is split into two: The biggest part is the 7,000 industrial syrup producers who make millions of litres and sell it around the world.

The iconic sugar shack is the tiny heritage part of the business, built in the image of the settlers 200 years ago who took the maple expertise of indigenous people to boil sap into syrup and then turned it into a literal cottage industry. Sugar shacks can also be found in eastern Ontario and northern New England.

There were about 200 Quebec sugar houses operating before the pandemic; industry insiders say less than half that number may still be alive when the virus has run its course. The pandemic bans on gathering have decimated business.

The commercial production part of the industry, which employs thousands, is not having a banner year, either. A sudden, warm spring has curtailed the usual flow of sap, meaning syrup will be less plentiful and flavourful than normal years.

“We know the end of the season is coming when we start seeing butterflies in the sap. The butterflies were here three weeks early,” said Denis Guillot, owner of Érablière Mart-L.

Stéphanie Laurin, head of Quebec’s association of sugar-shack operators, personally tried to reach out to each of her 200 members this winter to coax them into taking part in Ma Cabane à la maison. The campaign to market a group takeout business has provincial sponsorship and is getting distribution help from the Metro supermarket chain.

Only about 75 cabane owners answered the call. “Nearly 100 per cent of our revenue has disappeared,” Ms. Laurin said. “I’m afraid three-quarters of us might not make it.”

The goal of the effort is to replace some revenue, but also to stay in the hearts of Quebeckers, many of whom have a favourite cabane where they gather annually with family and friends. “We need Quebeckers to have our back or we won’t be back,” Ms. Laurin said.

Julie Blouin, 41, and the mother of three children, bought her Sucrerie Blouin on Ile d’Orléans near Quebec City from family six years ago. She’s employing five of her usual 22 workers to run the takeout business.

Ms. Blouin’s efforts are about more than keeping tradition alive. She has a mortgage and bills. “I need the money. If I don’t keep moving, I’ll be done,” she said. “I support a family with this.”

While “sugar shack” may evoke a particularly rustic image, many of the businesses have developed large reception halls with professional, high-volume kitchens. Insurance alone on these sugar shacks can run $120,000 a year and is increasingly difficult to find.

Like most owners, Ms. Blouin can usually take advantage of her picturesque setting to round out business with summer wedding receptions. But, it’s another part of the business that has disappeared, likely for a second year.

“People plan a year ahead with those things. It doesn’t matter how many people are vaccinated, we won’t be getting weddings in June or July,” Ms. Blouin said.

Ms. Laurin’s Chalet des Érables is down from about 300 employees to 30. People who normally work for her have left the area, making it hard to find workers to even fill out the smaller takeout business.

As head of her industry association, Ms. Laurin tries to maintain an optimistic tone, but she’s not sure if her own cabane will make it. “For most people, the pandemic has just reached the one-year point,” Ms. Laurin said. “For us it’s now a two-year crisis. I just hope people don’t forget us.”

photography and words by David Jackson

In early spring on a windless day in the Ottawa Valley, the woods are alive with the sounds of sap dripping and plumes of smoke rising from the hills. In Ontario, much like in Quebec, the struggles are similar for a maple syrup industry robbed of tourism.

The difference for syrup producers tucked into the Madawaska Highlands is that, unlike Quebec, producers are generally boiling for their family or friends, small farmers’ markets, or large-scale production, as opposed to the artisanal tourism-based restaurant industry.

Farms are often too far from urban centres for meaningful engagement with tourists, which means land taxes, as well as operating costs, are greatly reduced, a saving grace for the syrup harvesters in uncertain markets. What worries those who tap the populous sugar maples of the Ottawa Valley is the ever changing climate, this season seldom getting days of ideal sap running conditions.

The peace everyone seems to settle on, whether it’s 100 taps in a family maple stand, or 22,000 taps in a commercial harvesting forest, is that maple syrup is a liquid gold without an expiration date.

The small producers may not have their usual farmers’ markets, just as the commercial producer may turn more to wholesale rather than boutique shops tailored to the tourism industry. But everyone agrees that if it doesn’t sell this pandemic year, there’s always next. 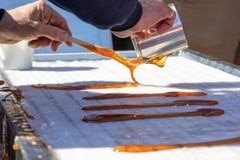 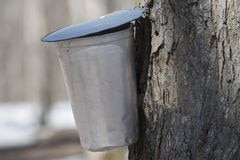