Thunder Bay’s Crown attorney Trevor Jukes is seeking an eight-to-12-year sentence for Brayden Bushby, who was convicted of manslaughter after throwing a trailer hitch at Barbara Kentner, and says his actions were motivated by bias against women, not Indigenous people.

However, victim and community impact statements delivered in Ontario Superior Court on Wednesday said Indigenous communities and groups in Thunder Bay, as well as across the country, feel the attack was fuelled by racism in a city where First Nations people have had items thrown at them for decades.

Mr. Jukes told Justice Helen Pierce that the context of the community impact statements was to demonstrate that it is not uncommon in Thunder Bay for Indigenous people to have items thrown at them, and the impact of Mr. Bushby’s actions flowed from that history. But he said there wasn’t evidence to prove Mr. Bushby was biased toward Indigenous people and that the community impact statements were based on their own experiences, not related to Mr. Bushby’s actions.

Ms. Kentner and her sister Melissa were walking to a family member’s house on the night of Jan. 28, 2017, when Mr. Bushby, an intoxicated passenger in his friend’s car, threw a trailer hitch at them. The weighted hitch struck Ms. Kentner in the stomach, rupturing her abdomen. She died six months later from complications of that injury, a forensic pathologist testified at trial in November.

Serena Kentner, Ms. Kentner’s only child, told the court through her victim impact statement, read by assistant Crown attorney Andrew Sadler, that her education and health have suffered since her mother’s death. Serena has been in an Ottawa hospital getting treatment for leukemia after a diagnosis last year.

Audrey Gilbeau, the executive director for the Nokiiwin Tribal Council, told the court how the case has heightened a fear of violence and racism already prevalent in Thunder Bay. She stated that what happened to Ms. Kentner matters because of the city’s long-standing history of anti-Indigenous racism. She said people are afraid to go for walks in the community or in the parks.

“It is part of a pattern of violence that continues to make Thunder Bay an unsafe place for Indigenous people, especially women,” Ms. Gilbeau read.

The defence for Mr. Bushby, 22, is seeking a four-year prison sentence.

Ryan Green argued his client has potential for rehabilitation and is a changed person since the birth of his daughter in December. A presentence report describes a positive upbringing void of violence in a tight-knit family that includes Mr. Bushby’s supportive parents, grandparents and sister.

Mr. Green said while Ms. Kentner was an innocent and vulnerable victim, Mr. Bushby doesn’t have to be punished for the crimes of his community and urged the judge to not make an example out of him or a “scapegoat.”

Mr. Jukes asked Justice Pierce to consider in her sentencing the aggravating and mitigating factors, including how vulnerable Ms. Kentner and her sister Melissa were walking on a street known for sex-trade workers when Mr. Bushby wanted to drive around to “yell at hookers.”

“She was an unsuspecting victim, there was no warning she was about to be assaulted,” Mr. Sadler said.

The Crown also submitted to the court that Mr. Bushby’s immediate satisfaction after striking Ms. Kentner is evident in his exclamation that he “got one” and laughing about it as testified by other passengers in the vehicle.

The Crown said a significant mitigating factor in sentencing is Mr. Bushby’s moral culpability and awareness of what he was doing. The Crown argued that while Mr. Bushby was intoxicated, he was not too intoxicated to carry out a plan that included getting out of the vehicle to grab a trailer hitch from someone’s property.

In a statement, Mr. Bushby told the court he took full responsibility for his actions and extended his deepest condolences to Ms. Kentner’s daughter. “I’m ashamed and embarrassed of my actions,” he said. “I want everybody, especially the Kentner family, to know I am truly sorry.”

Mr. Bushby, who didn’t testify at his trial, said he would carry the guilt for the rest of his life and wants to spend his time in prison becoming a better person.

Justice Pierce is scheduled to read her sentencing decision on May 4. 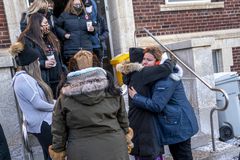 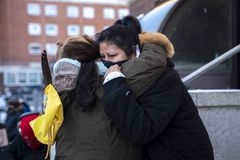 Follow Willow Fiddler,  on Twitter @WillowFiddler
Report an error Editorial code of conduct
Due to technical reasons, we have temporarily removed commenting from our articles. We hope to have this fixed soon. Thank you for your patience. If you are looking to give feedback on our new site, please send it along to feedback@globeandmail.com. If you want to write a letter to the editor, please forward to letters@globeandmail.com.
Comments are closed