The sight of thick black oil spreading across a picturesque northern lake sounds like an ecologist’s nightmare. But last month, as Madeline Stanley watched one multicoloured slick after another spreading across pristine water, she was thrilled.

“Actually, watching the oil being placed on the lake is a pretty exciting feeling,” said Ms. Stanley, a PhD student and project officer at the Experimental Lakes Area, or ELA, in Northwestern Ontario.

The research site, east of Kenora, includes 58 small lakes that serve as a natural laboratory for investigating environmental contamination. It is one of the few places on Earth where aquatic ecosystems can be deliberately polluted for scientific study.

Concerns about the growing volume of oil moving across Canada by rail and pipeline and a dearth of information on how to deal with oil-related accidents are big reasons why Ms. Stanley’s work is part of a broader effort by Canadian scientists to examine the effects of oil spills on freshwater environments.

In this case, the focus is on what happens after a cleanup operation has already been conducted.

“What we’re studying is the residual oil – the oil that can’t be recovered in a typical cleanup,” said Vince Palace, senior research scientist at the ELA.

Here, “oil” is shorthand for a complex blend of hydrocarbons that is particularly relevant to Canada. Diluted bitumen, sometimes called “dilbit,” consists of the tar-like raw material that is extracted from the Alberta oil sands mixed with a lighter petroleum derivative called diluent, which allows the bitumen to flow. Dilbit is the form in which Alberta oil is typically transported to refineries.

For this summer’s experiment at the ELA, dilbit was poured into several floating enclosures fixed to the edge of a small test lake. Every enclosure is built to confine the dilbit within a rectangular expanse of water 30 metres long and bordered by a 10-metre stretch of shoreline.

While the amount is modest – just one litre for every enclosure – it is enough to allow scientists to estimate the effects of a much larger spill on different kinds of freshwater environments. And it did not take long for a dark, gooey residue to coat the rock, soil and plants at the edge of the enclosure.

Experts say the need for such studies is acute. Much of what scientists know about oil spills is based on tanker or oil-rig disasters in seawater, where oil is more buoyant and often more dispersed than on small inland waterways. Seven years after Ottawa tried to shutter the former federal lab, researchers say the ELA is as necessary as ever.

At the same time, the amount of oil transported alongside freshwater lakes and rivers has grown dramatically over the past decade. National Energy Board figures show that, on average, about 3.4 million barrels of oil are currently flowing through Canadian pipelines every day. A few hundred thousand more are travelling by rail. Much of that oil is moving through hard-to-reach expanses of boreal forest, just like the ELA.

“In terms of response to a spill, this is an ecosystem we don’t know a heck of a lot about,” said Bruce Hollebone, a chemist and head of Environment and Climate Change Canada’s Oil Research Laboratory in Ottawa.

There’s also little information about the behaviour of dilbit when it is released into the environment. The material is volatile and changes over time as the diluent portion of the mixture evaporates. After some time, the bitumen that is left behind sinks, a process that depends on weather and other factors, which complicates recovery efforts.

“There’s a saying that oil and water don’t mix,” said Diane Orihel, an ecotoxicologist at Queen’s University in Kingston. “That’s true if you’re adding pure oil to distilled water in the lab. But if you’re talking about natural lake water, where you have wind, waves and a food web, then you’re working with a really different system.”

The biological element is key because while oil is toxic to many organisms, it is also consumed by bacteria. Microbes bring oil into the food chain and a sudden shift in the composition of bacterial communities in response to an oil spill can reverberate through an ecosystem in unforeseen ways. Laboratory testing with individual species is not enough to predict the full impact of an oil spill on an entire wetland, lake or river system.

All of this explains why environmental scientists, including Jules Blais at the University of Ottawa, have been thinking about conducting controlled oil spills at the ELA since 2012, when the world-renowned research site was still a federal facility run by Fisheries and Oceans Canada.

(That same year, the Harper government decided to shutter the ELA. The lab was saved after public protests by scientists and it is now operated by the Winnipeg-based International Institute for Sustainable Development with a combination of federal, provincial and philanthropic support.)

Then, in 2015, a Royal Society of Canada expert panel starkly highlighted the need for more research on oil spills in freshwater environments and on the relative effectiveness of different recovery methods.

Dr. Blais and Dr. Hollebone both saw the ELA as the ideal place to address the knowledge gap and proposed a project to do just that.

Their goal was to shed more light on spill risks in Canadian settings, such as the Wabamun Lake accident in 2005, when a train derailment spilled more than 700,000 litres of oil into a recreational lake west of Edmonton.

“[Wabamun Lake] was very much on my mind as we designed the project,” Dr. Hollebone said.

Early in the planning, scientists discussed the possibility of oiling an entire lake. But such an approach would require a huge cleanup operation, Dr. Hollebone said, “and it only gives you one shot” at assessing the impact of one kind of spill. In the end, they decided to employ test enclosures, known as limnocorrals, to confine the spilled oil and test a broader range of scenarios.

As the idea evolved, it branched into two separate experiments, plus a pilot study, which began in 2017.

For the pilot, scientists at the ELA used two-metre-wide plastic tubs that served as miniature lake ecosystems. Dilbit was poured into these test environments and the results informed a full-scale study that began last year.

That experiment, funded with federal research money and led by Dr. Blais and Dr. Orihel, involved adding varying concentrations of dilbit into seven limnocorrals positioned offshore in one of the ELA’s test lakes. At one extreme, the concentrations were equivalent to those experienced in 2010 when an Enbridge pipeline carrying Canadian dilbit ruptured near a tributary of the Kalamazoo River in Michigan, triggering the worst inland oil spill in U.S. history. But many limnocorrals received far less oil.

“We want to establish thresholds of toxicity,” Dr. Blais said. “At what point do we start to see the effects of an oil spill?”

Data from this experiment are still being analyzed a year later, including the impact on microbes, invertebrates and fish. Much of the bitumen is still there, on the lake bottom but contained within the limnocorrals. It will be removed in August. Meanwhile, Dr. Palace is leading the final phase of the research, which consists of a separate, industry-funded study to evaluate cleanup methods.

For that study, which began last month, the dilbit was allowed to sit for four days to simulate the response time for cleanup crews to reach a remote spill location. Then a standard recovery operation was conducted by an industry expert. The success of such operations depends on the type of shoreline, but in general, less than half the oil spilled is usually recovered.

Since then, scientists have been employing various means to see how the remaining oil is best dealt with. For example, fertilizer has been added to some enclosures to stimulate the activity of bacterial communities that digest oil – a process known as bioremediation. In others, scientists have deployed artificial “floating wetlands” that consist of aquatic plants growing on floating plastic mats. Beneath the water line, the tangle of floating plant material provides both oxygen and an ample surface area that supports a slimy coating of microbes, or biofilm, which Ms. Stanley hopes to analyze to better understand how bacteria interact with the spilled material.

“The goal is enhancing microbial growth to promote the breakdown of oil,” said Richard Grosshans, a research scientist at the ELA who is leading that part of the study. 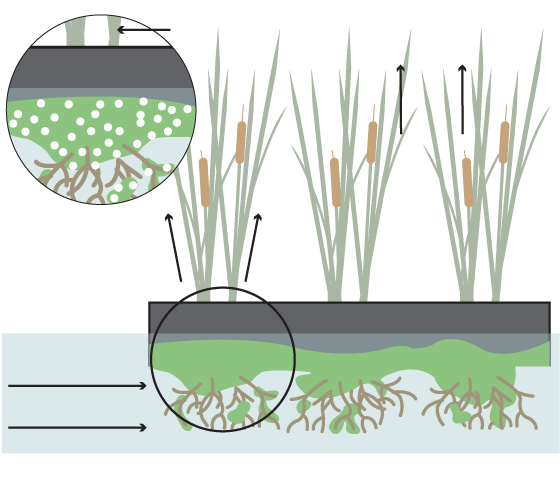 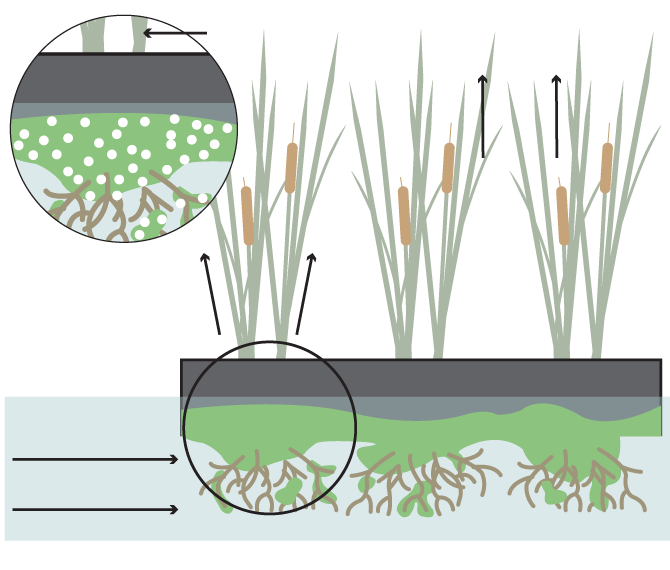 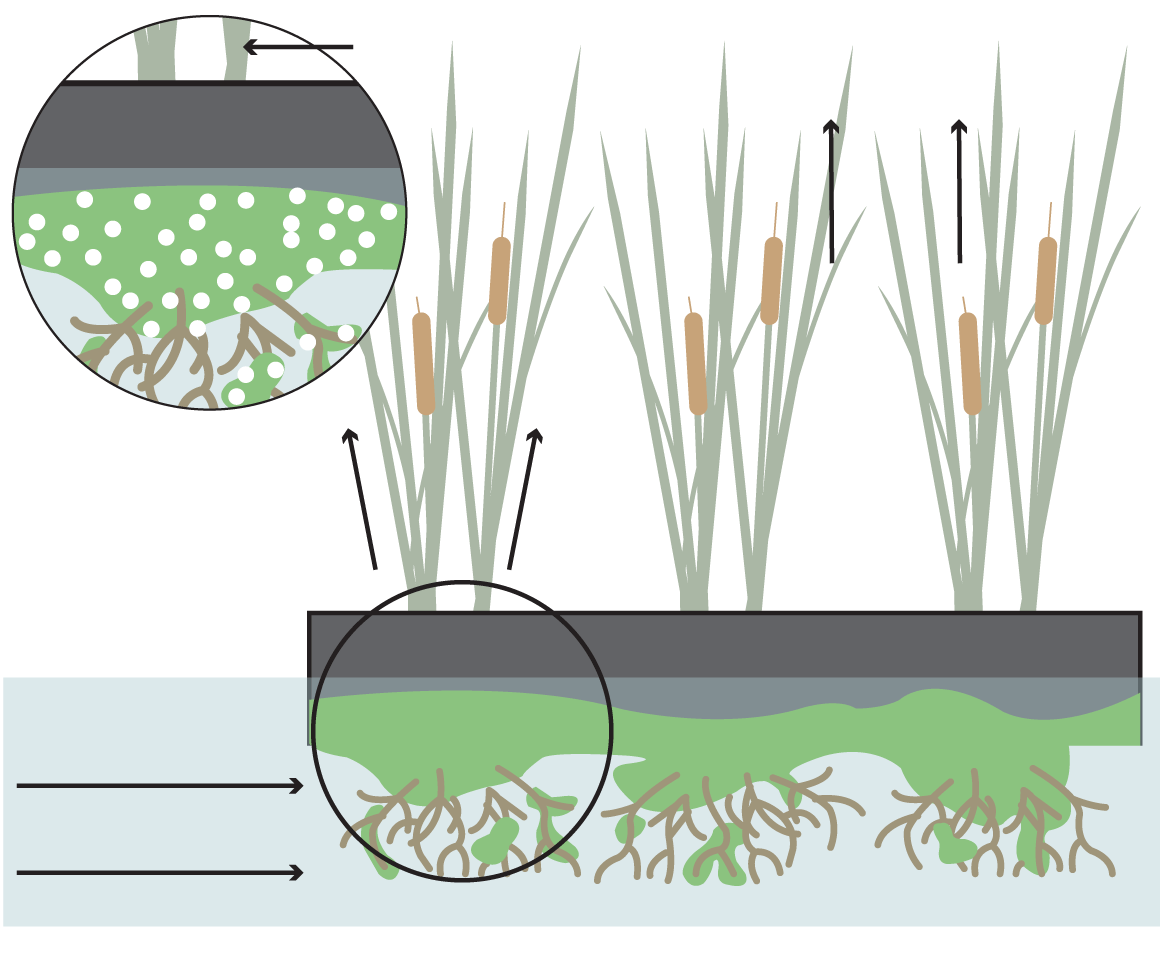 Charles Greer, a microbiologist with the National Research Council of Canada and a participant in the study, said the results could shed light on a number of key questions, including which micro-organisms are involved in consuming dilbit, what is left behind and whether the process can be accelerated. The answers may be especially relevant to remote spills, when “response times may not be sufficiently rapid to remove substantial amounts of spilled material,” he said.

Dr. Blais added that the experiments underscore the ELA’s importance as a test bed for understanding and reducing environmental contamination.

“What we hope to achieve with this is to help regulators develop effective countermeasures for spill response,” he said.

For Ms. Stanley, who donned a wetsuit and spent hours in frigid lake water earlier this year to make sure the enclosures were ready for this summer’s study, the work amounts to creating a miniature disaster in order to thwart a far bigger one.

“It’s quite amazing to step back and think about the opportunity we’ve been given,” she said. “We really can’t do this anywhere else.”