Health officials in rural parts of Ontario are bracing to learn how provincial funding cuts to public-health units will affect the services they can offer.

The Progressive Conservative government announced in the budget two weeks ago that it would downsize the number of public-health units from 35 to 10. Then last Thursday, Health Ministry officials told public-health representatives from across Ontario that provincial funding for some programs would be cut by as much as 50 per cent, with municipalities left to fund the gap.

Formal consultations to “modernize Ontario’s public health units” will begin soon, as the government prepares to “empower municipalities to have a stronger role in the delivery of public health,” Hayley Chazan, a spokeswoman for Health Minister Christine Elliott, said in an e-mail.

But some officials are worried that municipalities, particularly those in rural areas, will not be able to make up the province’s funding cuts, which could leave important services for vulnerable populations at risk.

“Our fear is that our municipalities are going to be stuck with paying more, which they can’t afford … and at the same time, we’ll lose the ability to have localized flavour to deliver our services,” said Paul Roumeliotis, medical officer of health and chief executive of the Eastern Ontario Health Unit, pointing to the smaller population size – and therefore budgets – of rural regions.

Dr. Roumeliotis’s health unit represents 250,000 people across 17 municipalities in his area, which he says faces a greater demand for services such as pre- and postnatal care as it has among the highest rates of single mothers in the province.

Some pockets of the region are also predominantly francophone, requiring bilingual health workers. In addition to budget cuts made on an “aggressive timeline,” it’s unclear how the new governance model of fewer public-health units will continue to meet local needs, Dr. Roumeliotis said. “It’s a difficult thing to disentangle. It’s a complicated, heterogeneous type of set-up in the province.”

Not all of the boards are structured the same way, with some public-health officials employed by the municipality and others directly by the independent health unit.

Another hurdle is that municipal budgets for the year have already been set, said Penny Sutcliffe, a medical officer of health and CEO for the Sudbury and Districts area. Her unit has put a freeze to hiring and non-essential expenditures until the province provides more information about how it will implement its plans.

The province is pledging that public-health units in rural communities “will be protected from any major cost increases,” Ms. Chazan said. “Ultimately, the government’s proposed plan will enable a better matching of public health needs with local realities.”

Equitable access to health care in the north, particularly among First Nations populations, is a focus for the Sudbury and Districts unit. Last year, its northern fruit and vegetable program served almost 20,000 students across 86 elementary schools, expanding to seven First Nations schools. The unit also reached hundreds of students on the dangers of opioids and launched a pilot program about mindfulness for middle schoolers.

“These [programs] look different in different settings,” Dr. Sutcliffe said, pointing to immunization services as an example of initiatives that are a particular focus for rural-health units because there are not others providing those services like there are in cities.

With reports from Jeff Gray 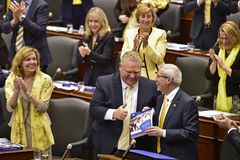