Quebec’s director of criminal and penal prosecutions is dropping more than half of the criminal charges against former Liberal deputy premier Nathalie Normandeau.

Five charges of fraud, corruption and conspiracy are being withdrawn, the prosecution service said in a statement to the court Friday.

The Crown intends to proceed to trial on three counts, including breach of trust and fraud against the government.

Crown prosecutor Richard Rougeau told reporters at the Quebec City courthouse that delays in bringing the case to trial had become problematic in light of the Supreme Court’s Jordan decision, which established time limits for criminal prosecutions.

“The Supreme Court has asked us to be as efficient as possible, to try to manage time,” Mr. Rougeau said. “That aspect of the file was definitely taken into consideration. I’m not saying it was the only reason or the most important, but it is certainly something that every day is part of the thinking of Crown prosecutors.”

Ms. Normandeau’s lawyer, Maxime Roy, said his client has done nothing wrong and she has been waiting more than three years to answer the allegations. He said the remaining charges will require Ms. Normandeau to explain why certain subsidies were awarded to municipal entities.

“It’s a file that never should have had a beginning, and it is about time that we start to see the end of this file,” he said, adding that he has not ruled out again seeking a stay under the Jordan decision. A previous such request was unsuccessful.

Ms. Normandeau, 51, was an influential minister who served as a Liberal member of the legislature from 1998 to 2011 and held key cabinet positions including municipal affairs, natural resources and Canadian intergovernmental affairs.

She served as deputy premier under Jean Charest’s government between 2007 and 2011. 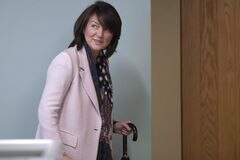