Outside his family’s restaurant at the Saint John Marina on Thursday, David Hickey estimated that more than three feet of water was being held back by a hastily constructed, makeshift barricade.

The marina sign was almost completely submerged after what Hickey said was a significant change in water levels overnight.

“I was standing in the restaurant, and three feet ahead of you outside the door there’s three and a half feet of water waiting to pour in,” Hickey said.

The eatery is “in the heart” of the floods encroaching on the southern New Brunswick city, Hickey said, though protective efforts started early enough to meet the rising waters after extensive damages last year.

“There’s a lot of others who are in a worse position than we are, without a doubt,” he said.

Relief efforts are in full swing as flooding continues to bedevil a swath of southern New Brunswick.

Water levels were predicted to reach 5.4 metres in Saint John Thursday, rising to 5.6 on Friday.

The provincial government warned residents that the waters are still expected to reach higher levels as the Saint John River continues to swell.

The Trans-Canada Highway was fully closed from Oromocto to River Glade and could remain closed for several days, as the transportation department reported 84 road closures across the province.

Officials said Thursday they were unable to say when the Trans-Canada would reopen.

Greg MacCallum, director of the New Brunswick Emergency Measures Organization, said Thursday that forecasts have dipped slightly and may not reach last year’s levels, but warned they are still well above the flood stage.

MacCallum said those in high-risk areas should pay close attention to the volatile water levels and encouraged residents to pitch in and lend each other a helping hand.

“This is a good day to reach out to your neighbours, to see if they require assistance,” MacCallum said.

“We want to encourage everyone to reach out, step up and help you where they can.”

Everyone from community volunteers to federal officials and Canadian Armed Forces are pitching in to help – even federal fisheries officers are aiding evacuation efforts in Fredericton, Quispamsis and St. George.

Hickey said the worsening flooding is worrying residents who have just paid for repairs to damaged property from last year’s floods.

He said damages from 30 inches of flood water at Saint John Marina last year led to expensive repairs to flooring to kitchen equipment -- hefty spending that would be difficult to match just one year later.

He said he hopes all levels of government take the impact of severe climate events seriously as residents feel the effects of increasingly regular natural disasters.

“We’ve got huge chunks of our community in Saint John and up the Saint John River being faced with these situations on what is starting to look like an annual basis, and it’s not sustainable,” Hickey said.

Across Saint John, other residents braced for conditions to worsen.

The Saint John English School District announced on Twitter that four schools would be closed Friday “due to flooding and impact on the sewer.”

On Darlings Island, residents are completely cut off as the road connecting the community to the mainland has been flooded.

But resident Amy Grant said the floods have also brought out the best in the community. One neighbour, nicknamed “Uber Rob,” started transporting people back and forth in his small, five-seat speedboat last year and has continued the tradition this spring.

Grant said Rob has posted his phone number by the water’s edge, offering pick-ups at any hour of day.

“It really has brought the community together, I’ll give it that,” Grant said of the flood season.

MacCallum said the recurring severity of the province’s floods has made the necessity of planning for climate change into stark focus.

“It’s hard to define historic now ... Last year was a dramatic event and this year resembles it,” he said.

“I would suggest we need to plan for a change in climate and we need to have enough flexibility and agility in our plans to be able to deal with these things.”

Opinion
Death, taxes – and flooding: Repeated disasters are the norm, so let’s have a better plan
April 25, 2019 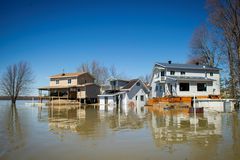 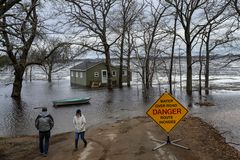 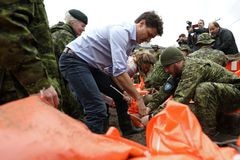