Images of police using rubber bullets and tear gas against protesters in Hong Kong in early June spurred Joel Wan to pick up the phone and call the United Nations human rights office from his home in Vancouver.

“It was 3 a.m. and I was watching live on my computer. I can’t just sit there and watch, so I have to report this somewhere immediately,” recalled Wan, who is 18 and was born in Hong Kong.

Wan called the actions of police in Hong Kong a “trigger” for him, although he was already concerned about a proposed extradition bill that sparked the ongoing mass protests in the semi-autonomous Chinese territory.

The bill, which has since been suspended, would have allowed certain suspects to be extradited to mainland China to face charges, a move Wan and others in Canada view as a blow to Hong Kong’s legal independence.

In response, Wan helped form a group called Vancouver Hong Kong Political Activists, which aims to shed light on what he sees as the erosion of democratic freedoms in Hong Kong.

“When I’m enjoying the freedom and human rights in Canada, and myself being a part of Hong Kong identity, I have a greater responsibility to speak up for the people when they can’t,” said Wan in a recent interview.

“I decided to step up to let Canadians hear what we’re saying.”

Earlier this month, the political climate in Hong Kong spilled into the streets of Vancouver as an event organized by Wan’s group sparked a counter-rally by supporters of China’s central government and the Hong Kong police.

As many as 300,000 Canadians live in Hong Kong, according to the Asia Pacific Foundation, and more than 200,000 people living in Canada were born in Hong Kong.

Members of the Chinese-Canadian community in the Lower Mainland say the question of how tensions are playing out in the region is a complicated one.

The extradition bill has been suspended, but protesters want it off the legislative table altogether. The movement’s demands have also expanded to include universal suffrage when electing Hong Kong’s leaders, amnesty for protesters who have been arrested and an independent investigation into the use of force by Hong Kong police.

“It’s not just the amendment of the bill,” he said. “It’s because we can’t vote for a government that serves us truly.”

The United Nations has also released a statement on behalf of its high commissioner for human rights, Michelle Bachelet, indicating there was “credible evidence” of Hong Kong law enforcement officials using measures “prohibited by international norms and standards.” Bachelet condemned any form of violence, calling on protesters to “express their views in a peaceful way” and urging Hong Kong authorities to investigate police actions immediately.

It was in hopes of raising awareness about events in Hong Kong that Wan said his group planned to hand out flyers at a transit station near Vancouver’s city hall on Aug. 17.

But on that day, Wan found himself in the centre of duelling rallies, a reflection of tensions between pro-democracy protesters and those who are aligned with Beijing and law enforcement in Hong Kong.

“I didn’t expect there would be a standoff,” said Wan, who donned a mask for the first time that day, concealing his face after becoming aware of threatening messages shared on WeChat, a Chinese social media and mobile payment app.

Wan believes many of those at the counter-rally were spurred on by the Chinese consulate, which denied any involvement in a statement.

“It is totally understandable and reasonable for local overseas Chinese to express indignation and opposition against words and deeds that attempt to separate China and smear its image,” the consulate said in an e-mail to The Canadian Press.

“Some western media have repeatedly targeted at Chinese government and its diplomatic missions overseas by misleading implications and groundless accusations, to which we firmly oppose.”

Vancouver police say protests on Aug. 17 and 18 were of comparable size, attracting about 400 people evenly split between the two sides. Const. Steve Addison said police are aware of what is being said on social media and they are monitoring to determine risk levels, as they do for any demonstration. No other action has been taken by police, he said.

Similar protests were also held that weekend in Toronto.

At the first rally in Vancouver, those sympathetic to the Chinese government chanted “One China,” while the pro-democracy supporters chanted “two systems.”

Wan said he and his group are not calling for Hong Kong’s independence, but they do want the “one country, two systems” agreement upheld, a reference to the implementation of the governance structure that was brought in when Hong Kong was reunified with China in 1997 after more than 150 years of British rule.

“The two systems, for Hong Kongers, they feel have been eroded, step by step,” said Josephine Chiu-Duke, a professor in the department of Asian studies at the University of British Columbia and a specialist in Chinese intellectual history.

Chiu-Duke considers the latest round of demonstrations to be an extension of the ongoing struggle to defend the rights promised to Hong Kong residents when the region became semi-autonomous more than 20 years ago.

Most people in the pro-democracy camp believe the erosion is backed by the Beijing government to gradually unify the two systems, Chiu-Duke noted.

“They want the Beijing government to honour their promise to Hong Kong’s people (and) let the rule of law rule Hong Kong,” she said, adding that many people in the Lower Mainland with roots in Hong Kong want to let the pro-democracy protesters know they’re not alone.

As for the crowds near city hall earlier this month, Chiu-Duke said it’s hard to pin down why the demonstrators supporting the Chinese government showed up.

“There are rumours they were basically organized by the Chinese consulate,” said Chiu-Duke, pointing to reports that a spokesman for China’s foreign affairs ministry stated the government hopes “overseas Chinese can express their patriotism in a rational way.”

At the rally, Nicholas Wang said he helped organize the “One China” group and that he supports the police in Hong Kong.

“Our idea is just against violence, that’s the most important thing,” said Wang, who is from mainland China and attributes violent clashes in Hong Kong to the protesters.

Wang acknowledged that those who supported the protesters in Hong Kong at the rally in Vancouver were also opposed to violence.

“It’s perfect that they support the same idea with us,” Wang said in an interview.

But he believes they are only talking about one side of the story.

“I think you can find more videos of more younger people creating chaos there instead of police doing that,” said Wang, adding that if police didn’t carry out their duties, Hong Kong would degenerate into chaos.

Chinese exchange student Erika Zhao also blamed violence on the protesters and said journalists are only focusing on the actions of the police.

“It’s quite biased news,” she said.

Despite the tense faceoff in Vancouver, Joel Wan said he is on good terms with friends who disagree with him.

“Most of the mainland (Chinese) people I encounter are willing to engage into our conversation,” said Wan. “One of my friends, he entirely believed we are rioters and we are messing up the city. After explanation, we still stand strong in our opinions, but we established agreement (and) understanding (on) why each other thinks like that.”

Most people Wan knows are also focused on life in Vancouver and aren’t as involved with what’s happening in Hong Kong, he said.

It’s a sentiment shared by Calvin Lam, 23, who was born in Vancouver and raised in Hong Kong before returning to B.C. as a university student.

Lam was on vacation in Hong Kong in early June when the protests began to escalate.

He said he was sympathetic to their cause until Hong Kong’s chief executive, Carrie Lam, announced the suspension of the extradition bill. At that point, Lam said the protesters achieved their objective and the rest of their demands are unrealistic.

He said he’s concerned that ongoing mass protests, altercations between protesters and police, destruction of property and disruptions in Hong Kong’s airport and transit systems are damaging Hong Kong’s economy and reputation.

But, like Wan, Lam said he approaches friends who disagree with him amicably.

“They have their stance, I understand it. I am careful in what I say to them. I never use any personal attacks,” said Lam, in reference to derogatory name-calling that has been levelled online at pro-democracy protesters.

“We just know this issue is happening in Hong Kong and then I’m psychologically or emotionally affected because I see Hong Kong as my homeland. But I don’t think any other areas of my life are affected.” 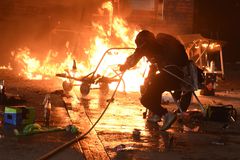 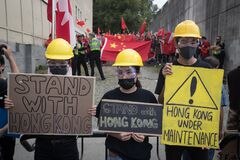 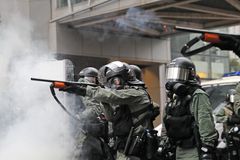