For the first time in its history, Statistics Canada is offering respondents a third gender option in its surveys, beyond just male and female.

The agency is testing new questions on some surveys to capture a wider definition of gender, acknowledging that not everyone identifies as male or female. In its recent opioid awareness survey, for example, respondents were asked what their assigned sex was at birth. The next question asked respondents what their gender is; the options were male, female and “or, please specify.”

Canada isn’t the only country striving to be more inclusive in its data collection. Nepal, India and Pakistan include a “third gender” or transgender options in their censuses, while New Zealand and Australia have developed new statistical standards on gender identity – something Statscan released last month.

“We’re testing different ways, and looking at how people respond, and then we’ll modify and adapt,” said Marc Lachance, director of Statscan’s social and aboriginal statistics division. “Terminology changes over time … it’s a work in progress.”

Over the past two years, through consultations with transgender people and non-binary organizations including the LGBTQ2 Secretariat, “we’ve tried to understand at Statistics Canada the concepts of sex, sex at birth, gender and gender identity,” he said.

In collecting data on gender, the agency’s classification structure now includes options of male, female and a new “gender diverse” or non-binary category. The agency’s official definition of gender diverse includes “persons whose current gender was not reported exclusively as male or female … persons who were reported as being unsure of their gender, persons who were reported as both male and female, or neither male nor female.”

It’s a welcome development for Sav Jonsa, in Winnipeg, who for years would hand draw an extra box on surveys, under the male/female choices and who prefers the gender-neutral pronoun they.

“I really appreciated that … it gives people a lot more freedom to identify how they want, and not just to have to check another box that they don’t feel comfortable with.” Sav Jonsa was assigned female at birth, and identifies as non-binary queer. They added that they hope this will yield insights into issues such as access to housing and income disparities among non-binary people.

The efforts come as the agency is exploring options on gender diversity for the 2021 census. Statscan was criticized in its last census for only listing male and female options in its sex question (and not including a gender question), though it did allow respondents to leave that question blank and add their views in the comments section.

“We’re still in the design phase, said Mr. Lachance. “At this point Statistics Canada is testing different options for the next census. But at the same time, in parallel, we have introduced the new sex question and a gender question to test the responses.”

The last federal budget announced $6.7-million in funding over five years to establish a Centre for Gender, Diversity and Inclusion Statistics at Statscan. Consultations are under way to identify key data gaps and priorities on which areas should be filled.

The new centre will work with other federal departments, such as Status of Women and Canadian Heritage, along with provinces to identify needs and priorities. It will act as a hub for information on diversity, by both posting data that is already being collected elsewhere and collecting its own data. Among areas that could be enhanced: more information on people with disabilities, gender equality (including pay equity), issues of discrimination and barriers to employment. One key data gap is about women in leadership positions, such as the representation of women on boards or in executive roles, said Mr. Lachance, who oversees the new centre.

“One of the data gaps that we would like to address is how we can measure simple indicators, such as the number of women in leadership positions – corporate boards, or boards of non-profit organizations, so we can see how women are making progress.”

New document aims to guide conversations between parents and children about gender identity
May 9, 2018
Ontario-born filmmaker receives non-binary birth certificate after legal battle with province
May 7, 2018 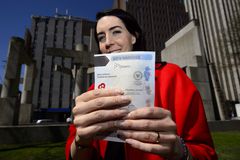