A teenage boy has been found guilty of sexually assaulting another student at an all-boys Catholic high school in Toronto.

The teen, who was a student at St. Michael’s College School at the time of the incident, has been found guilty of gang sexual assault, sexual assault with a weapon and assault.

During trial, lawyers for the teen argued he should be acquitted because he feared he would become the victim if he didn’t participate in the November 2018 incident.

They said the teen was acting under duress when he held down the victim, who was being sexually assaulted with a broom by two others in a school locker-room.

The Crown, however, argued the duress defence had not been proven beyond a reasonable doubt and the accused should be found guilty.

The teen also faced the same charges in a similar incident against another student that fall, but those were withdrawn earlier this year after the judge found there was not enough evidence to proceed. 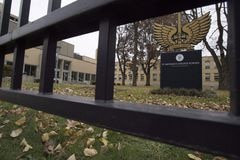