Canada enlisted citizens who travelled to Communist countries during the Cold War to gather needed intelligence – a shadowy element of a little-known government program detailed in a newly declassified history.

Officials became sufficiently nervous about the tasking of Canadians – and the prospect of being caught snooping overseas – that they had John Diefenbaker, prime minister at the time, give his blessing, reveals a study by intelligence expert Wesley Wark.

Mr. Wark began work in the late 1990s on the government-commissioned study of how Canada’s intelligence community evolved in the years following the Second World War. Much of the book-length manuscript, based on classified files, was released under the Access to Information Act in 2005, but considerable portions were considered too sensitive to disclose.

Additional details of the intelligence effort to conscript travellers were released to The Canadian Press following a complaint to the information commissioner.

Canada decided against creating a secret intelligence service to spy abroad in the early phase of the Cold War. But officials were conscious of the value of trying to provide some Canadian intelligence from human sources, especially to ensure favour with Canada’s more powerful partners, such as the U.S. and Britain, says Mr. Wark, who teaches at the University of Ottawa.

An interview program was established in 1953 within Canada’s Joint Intelligence Bureau, which handled a steady flow of secret information on economic and military matters.

In the beginning, officials collected intelligence largely from defectors and recent immigrants from the Soviet Union and East Bloc countries. The program got a boost in 1956 with the influx to Canada of refugees fleeing the aftermath of the failed Hungarian uprising, Mr. Wark says.

In mid-1958, the program turned to the potential value of intelligence gleaned from travellers, mostly business people and scientists, who ventured to Communist countries, he writes.

Initially, the Joint Intelligence Bureau limited the collection effort to debriefing people upon their return to Canada. But soon it realized there might be greater value in advising travellers, in advance of their visits, of the sort of information desired, the study says.

“This was tricky ground, for it raised the spectre of Canadian citizens abroad being caught and accused of espionage without the protection of any diplomatic status and with attendant political risks and embarrassment.”

In February, 1961, Robert Bryce, then secretary to the cabinet, informed Mr. Diefenbaker about the practice of gathering interview intelligence – including advance requests for information in “a very few cases” following specific approval of the federal government.

Safeguards in place were “designed to ensure that the more gung-ho travellers did not engage in anything approaching espionage – no field notes, no photographs, no specialized intelligence equipment were to be allowed,” Mr. Wark writes.

Selected travellers who received briefings were told not to discuss their activities with anyone, including Canadian diplomatic representatives in the country being visited, Mr. Bryce’s memo said. Only “thoroughly reliable and trustworthy” Canadians would be approached to undertake such missions.

“What John Diefenbaker made of such shenanigans is hard to say, but Bryce’s memo records a simple ‘approved by the Prime Minister’ dated 1 March, 1961,” Mr. Wark writes.

It was one of the few instances during the period when prime ministerial approval of an intelligence-collection program was sought, the study adds.

“There was always a distinction in the program between tasking travellers prior to their visits abroad, where the dangers of being accused of spying lurked, and more passively receiving information from returned travellers,”Mr. Wark told The Canadian Press.

Kurt Jensen, a former employee of Canada’s foreign ministry, wrote in a 2004 journal article that Canadians who went to the Soviet Bloc, China and Cuba were of particular interest to the program in its early days. However, Mr. Jensen found the government files silent on the number of individuals who might have received previsit briefings and the extent to which “tasked” intelligence-gathering operations actually occurred.

“The danger of sending untrained observers into hostile areas with specific intelligence collection requirements is self-evident. Such a program could not have survived long before disclosure,” Mr. Jensen writes.

“All indications suggest that this facet of the program was short-lived and, at best, involved a handful of individuals before ceasing altogether.”

Russia and U.S. abandon 32 year-old missile treaty then blame each other
August 22, 2019 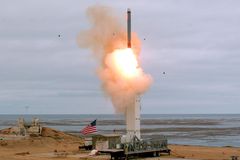