Intimate partner violence is similarly prevalent in same-sex relationships as in heterosexual ones, a new study from the University of Guelph has found.

The research, which was published in the Journal of Interpersonal Violence, is the largest peer-reviewed study of its kind to look at the issue of intimate partner violence in same-sex couples in Canada.

“It’s a first step only, but an important one – because it highlights the need to be specific and clear about the groups being examined and their experiences of violence, not only across groups but within groups as well,” University of Guelph Professor Myrna Dawson said.

Prof. Dawson leads the school’s Centre for the Study of Social and Legal Responses to Violence (CSSLRV), which oversaw the study. Researchers analyzed data from Statistics Canada’s Uniform Crime Reporting Survey, which gathers data directly from police reports and was designed to measure the incidence of crime in Canada.

Of the more than 340,000 incidents of partner violence analyzed by the researchers (all of which were reported to the police between 2007 and 2011), 97 per cent involved heterosexual partners and 3 per cent involved same-sex partners. That’s consistent, the study’s authors say, with previous Statistics Canada research on the proportion of Canadians who identify as LGBTQ2S+.

Prof. Dawson, who is also co-chair of the Canadian Domestic Homicide Prevention Initiative, said this research will be critical in helping stakeholders to dissect the realities of gender-based violence – a term that she says governments have started to use as a “broad, catch-all term...with little understanding about what exactly is being examined or discussed.”

While the study revealed similarities in the prevalence of police-reported violence between heterosexual and same-sex couples, it also captured some key differences in experiences.

Though more incidents of violence involved female victims, a higher percentage of the violence reported by male victims involved aggravated assault or assault with a weapon. This could be, the researchers noted, because men were less likely to call police except in the more extreme cases.

“These victims may be further impacted by society’s traditional beliefs about masculinity, which suggest that males should be strong and in control, not victims,” Prof. Dawson said.

She said these important distinctions “are missed when we don't look at the experiences of specific groups.” Violence cannot be prevented if it is not examined and understood, she argues.

The team acknowledges there are limitations in the data that make it difficult to draw concrete conclusions from.

For one, the relationship between the victim and accused cited in each case was determined by police – not by the people involved themselves. Gender information is also reported by police, not by the individuals. There are three options: male, female and unknown. In this study, any cases involving people identified as “unknown” had to be excluded because purpose of this study was to contrast same-sex and opposite-sex relationships.

Another challenge is the reality of how under-reported intimate partner violence is. When you compound that with the fact that LGBTQ2S+ people face additional stigma and barriers when deciding whether to go to police, the study authors acknowledge these figures are also likely particularly low.

But they see this study as a launch pad for future research.

Jessica Whitehead, lead author of the study and a former criminology and criminal justice policy master’s student at Guelph, hopes the study will highlight the need for more inclusive policies and resources when it comes to responding to and supporting victims of violence and abuse.

“Right now there’s this cyclical problem that there’s limited awareness or recognition of this issue by individuals themselves ... and limited awareness among the service providers responding to their needs. And as a result, we have a lack of research, which then leads to a lack of policies and programming initiatives, and then circles back to not having as much awareness as there could be,” Ms. Whitehead said.

“My ultimate hope would be that there’s more acknowledgment and planning and preparedness on the service provider end as well.”

Helen Kennedy, the executive director of LGBTQ2S+ organization Egale Canada, is well aware of the lack of information in this area.

Given the limitations of the Statistics Canada Uniform Crime Reporting survey, she is wary of how reflective it can possibly be when it comes to the experiences of the LGBTQ community.

“We live in a very binary society,” she said. “We’re devoid of real research data and statistical data in this area for sure.”

But she says any research in this area is a positive.

“If it does nothing else than raise awareness about the problem then I’ll take it,” she said.

Editor’s note: A previous version of this story failed to identify Jessica Whitehead as the lead author of the study. 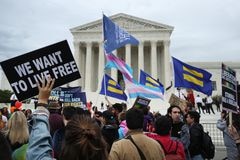 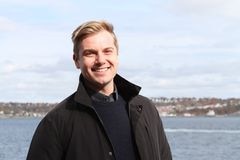 Want to support LGBT people in the workplace? There’s a fund for that
May 3, 2018