When astronomy educator Julie Bolduc-Duval began planning for the solar eclipse that is set to sweep across a large portion of Canada on Thursday, her biggest question was what to do for all the schoolchildren in the Far North who are best placed to witness the event.

The answer was to order more than 20,000 solar-eclipse viewers and develop educational materials on how to understand and observe the phenomenon. This spring, from her home in Thetford Mines, Que., she and her three children then packed and shipped the viewers to schools in nearly 100 communities across Northern Ontario, Quebec, Nunavut and Newfoundland.

“We’re trying to make it as accessible as possible,” said Ms. Bolduc-Duval, executive director of Discover the Universe, an organization that provides training in astronomy for teachers and other public educators. “Our goal is for each kid to go home with a viewer and information sheet that’s translated into the languages that are likely to be spoken by their parents.”

MURAT YÃœKSELIR / THE GLOBE AND MAIL, 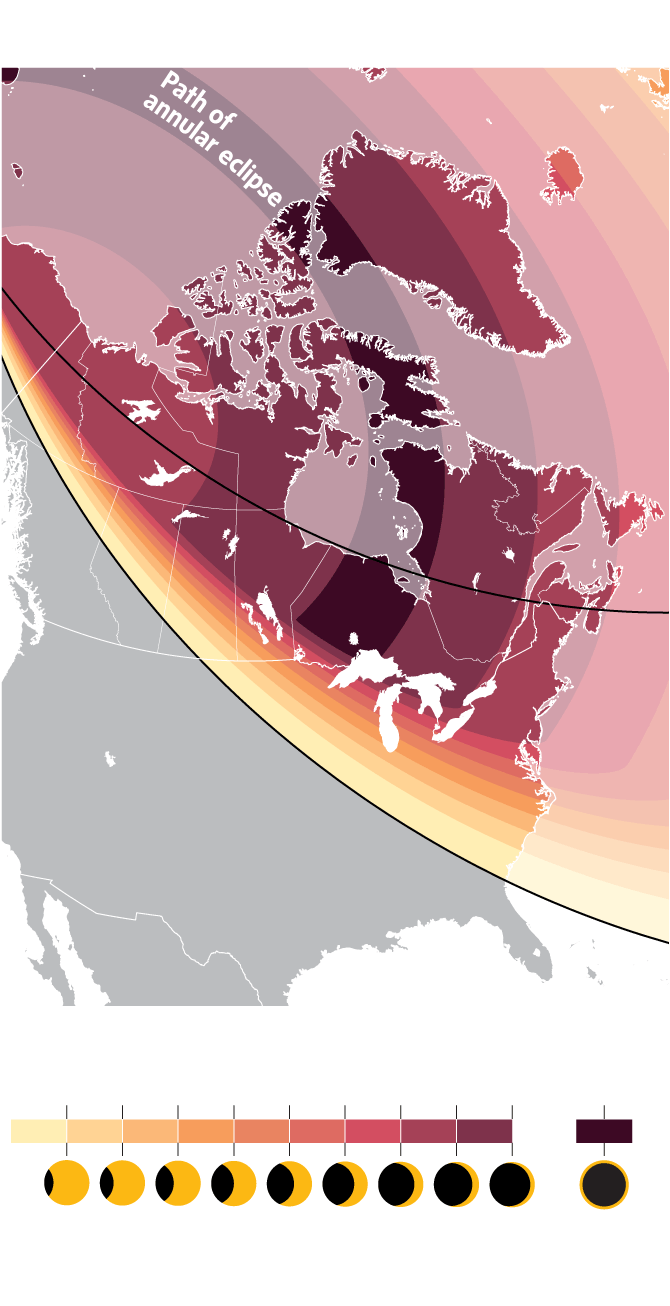 MURAT YÃœKSELIR / THE GLOBE AND MAIL, 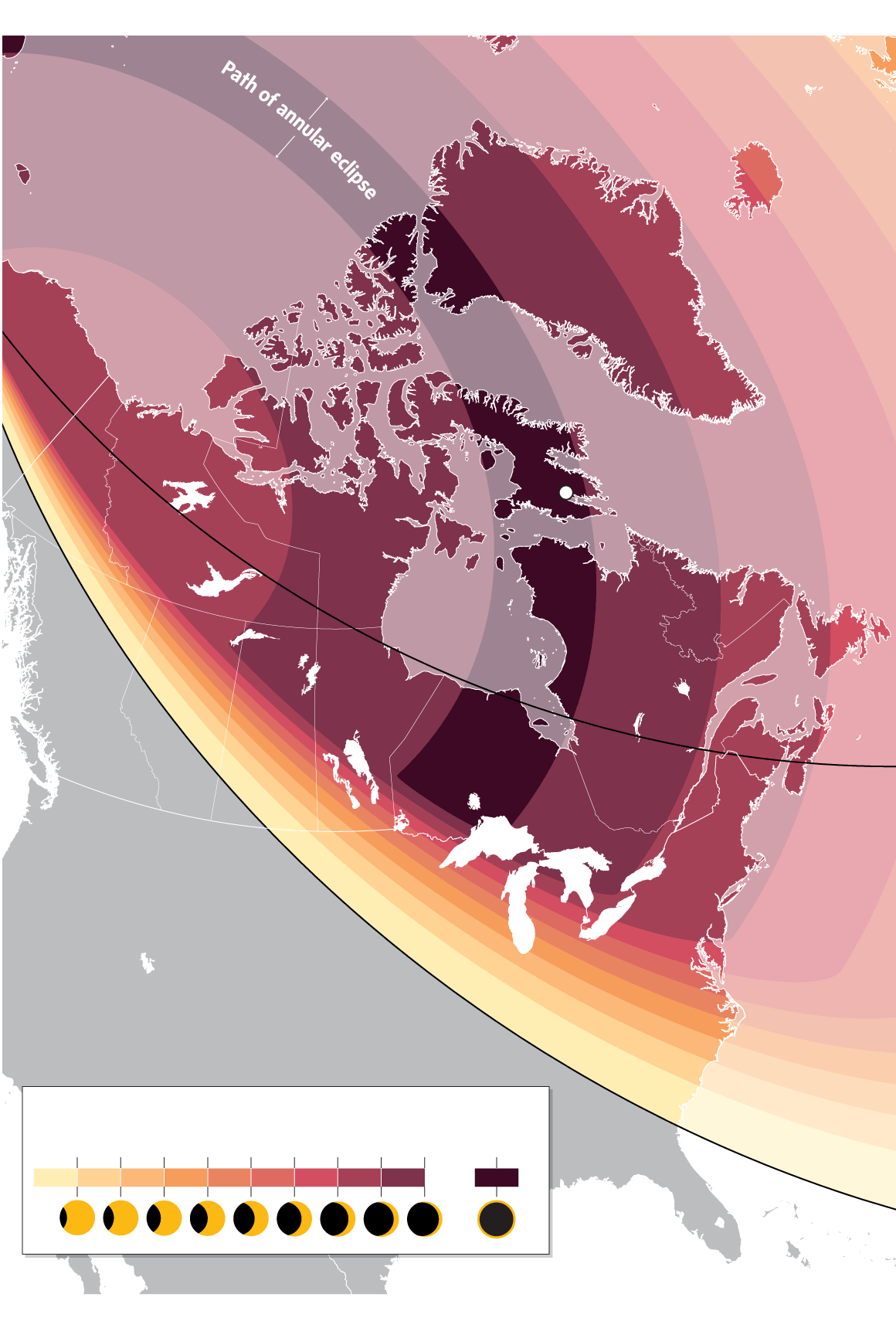 For southerners, including those in Toronto, Montreal and Halifax, the event will feature the rare sight of a crescent sun rising, with the moon blocking a large fraction of the solar disc. But observers who are located in a broad strip from Northern Ontario to Canada’s high Arctic will also have a chance to see the moon’s round silhouette passing directly in front of the sun.

On some occasions, such an alignment produces that most sublime of all astronomical spectacles – a total eclipse of the sun. In this case, however, because the moon is farther than average in the course of its orbit around Earth, it is too small to cover the sun entirely. Instead, for those in the right place, the moon’s silhouette will briefly be surrounded by an unbroken circle of sunlight. Astronomers call this type of eclipse “annular,” though some eclipse enthusiasts prefer “ring of fire.” Either way, it is a rare enough event that most people never get to see one in their lifetime. The last one that was widely observed in Canada occurred in 1994.

Locations where this week’s annular eclipse can be seen at sunrise include Marathon, Geraldton, Armstrong and a cluster of other small towns on or near the north shore of Lake Superior. The path of annularity then traverses northeast across the boreal forest, with its midline reaching James Bay just above Attawapiskat, Ont. From there it continues across to the Nunavik region of northern Quebec and Nunavut’s Baffin Island, including Iqaluit, which is the largest municipality on the path. At that point, the annular eclipse will bend northward, cutting across a portion of Greenland and Ellesmere Island. After crossing the Arctic Ocean, it will become a sunset eclipse in Siberia.

HOW TO SAFELY WATCH A SOLAR ECLIPSE

It is never safe to stare directly at the sun – a commonsense rule that applies during the partial phases of a solar eclipse. As long as some portion of the sun’s surface is visible, looking at a solar eclipse without appropriate protection can cause permanent eye damage due to infrared and ultraviolet rays.

1. Set the focus knob of your binoculars to the middle of its range

2. Use binoculars to project two identical images of the sun onto a white surface about 30 cm away

3. To avoid overheating your binoculars don’t point them at the sun for more than a few minutes at a time

The COVID-19 pandemic has ruled out mass gatherings for viewing the event in those Canadian cities where the partial phases of the eclipse will be visible in the early-morning hours. That has left many who would otherwise be holding such events to focus on helping people to view the eclipse on their own.

Those planning to view the eclipse should bear in mind that it is unsafe to stare directly at the unfiltered light of the sun. Mike Reid, an astronomer and public outreach co-ordinator for the University of Toronto’s Dunlap Institute for Astronomy and Astrophysics, said the best way to watch the event without a certified solar filter or eclipse viewer is to pass sunlight through a small hole and project it onto a white surface. A kitchen colander will do the trick, and create dozens of mini eclipses in the process.

“Pretty much anything with a clean hole poked in it will work,” Dr. Reid said.

He added that the bigger challenge for would-be eclipse watchers may be getting up before dawn and finding a spot with enough clearance to see the sun breaking over the horizon with the partial eclipse under way.

That is precisely what Scott Higgins, a scientist at the Experimental Lakes Area in northwestern Ontario, said he and his colleagues hope to do at dawn Thursday. The freshwater research facility near Kenora lies just outside the path of annular eclipse.

Less than an hour later but more than 3,700 kilometres away, the annular eclipse will be near its best for those watching from the Canadian Forces outpost at Alert, Nunavut, the most northern inhabited location on Earth.

Jane Fonger, who is program manager for Environment and Climate Change Canada’s weather station in Alert, said her fingers are crossed that a forecast of partly cloudy skies will still allow a glimpse of the ring of fire, which is predicted to last for 3½ minutes during the mid-portion of the eclipse.

“Everyone who is planning to get up to watch is quite excited that this is happening,” she said, adding that the peak of the eclipse will occur there at 6:45 a.m. local time, just ahead of a scheduled weather-balloon launch.

Others not as well placed are resorting to extraordinary means to catch a similar view. While no part of the United States is on the path of the annular eclipse, a U.S. expedition organized by Sky & Telescope magazine has chartered a flight out of Minnesota to catch the event from the air and skirt the dilemma of a closed border with Canada.

For those who live outside of the eclipse zone entirely or are unable to watch in person, Science North in Sudbury is preparing to livestream the partial eclipse from a location near the city’s Big Nickel, as well as a backup site in North Bay.

“Hopefully between the two sites we’ll be able to show the world something cool,” said staff scientist Olathe MacIntyre.

Back in Quebec, Julie Bolduc-Duval said that this week’s spectacle has provided astronomy educators with a useful dry run for Canada’s next total solar eclipse in April, 2024.

She said she plans to watch Thursday’s partial eclipse with her family, but her heart will also be with the many teachers and children who received the eclipse viewers she shipped.

“We hope they all get clear skies – that’s the only thing we can’t control,” she said. “But no matter what, they are learning and they are having fun expecting it.”

How to view the total lunar eclipse early Wednesday morning: West coast is the best spot in Canada
May 24, 2021
Canada announces plans to land a rover on the moon in the next five years
May 26, 2021