The judges of the Supreme Court of Canada have ensured that documents disclosing their secret inner workings will not be revealed during their lifetime – and possibly ever.

The court has placed a 50-year embargo on public access to files related to the deliberations of the judges, from the time they rule on a case.

The restriction took effect last June when the court and Library and Archives Canada announced it as part of an agreement to “ensure that the case files of Canada’s highest court will be preserved and accessible to future generations.” (The announcement went largely unnoticed at the time.)

What the court and the archives did not say, but the agreement makes clear, is that the Supreme Court can withdraw the files at any time, and keep the documents secret forever, without providing a justification.

The agreement means that while the Supreme Court enjoys huge influence over Canadian life and politics – through rulings on such cases on gay marriage, assisted dying and even the possible breakup of Canada itself − those seeking to understand how it went about exercising its power will lose the possibility of access to a major source of documentary evidence.

How Beverley McLachlin found her bliss: Where she came from and what she leaves behind

The Globe and Mail obtained the agreement this month after requesting it from the court.

It applies to the notes and correspondence between judges as they deliberate on a case, mark up one another’s draft rulings or communicate through their clerks.

These documents were once the property of individual judges who could make them available to researchers on request, when and if they wished, after their retirement. Now, those documents are owned by the court and subject to its 50-year rule.

Federal Access to Information law does not currently apply to the Supreme Court. (A bill is now before the Senate that would make certain Supreme Court records, such as expenses, public.)

The agreement gives the Supreme Court more protection from scrutiny than the federal cabinet, whose records are accessible after 20 years, with some exceptions, such as national security. The terms are also stricter than those in other jurisdictions. Supreme courts in the United States, Britain and Australia, for example, allow their judges to decide what to do with such information. In lawyer and journalist Jeffrey Toobin’s 2007 work The Nine: Inside the Secret World of the Supreme Court, based in part on the “priceless trove” of retired U.S. justice Harry Blackmun, he shows the court’s internal machinations when abortion rights hung in the balance in a major 1993 case.

Other Canadian courts also let judges choose. And a 2003 biography of former Supreme Court chief justice Brian Dickson contained revelations from his files – such as that the first female justice, Bertha Wilson, considering resigning over perceived sexism within the court. Or that he insisted a judge with mental-health problems, Gerald Le Dain, leave the court permanently.

Reaction from historians, lawyers and political scientists when told by The Globe of the 50-year embargo ranged from shock to bafflement to resigned acceptance.

“Fifty! Five-zero!” said Peter Russell, the dean of Canada’s political scientists and an authority on the Supreme Court. “I don’t know any other constitutional democracy that puts the lid on it for so long.”

Similar documents have been essential reading in the United States, where not only academic books but bestsellers have taken people behind the curtain.

“Without those judicial papers, Americans would be very much in the dark about what makes the Supreme Court tick,” Prof. Russell said.

Eugene Meehan, whose Ottawa law firm Supreme Advocacy publishes a weekly newsletter on the court, said he eagerly awaits the end of the embargo period.

Legal historian Philip Girard, who had been told of the embargo weeks before it was announced, said the agreement preserves records that might otherwise be lost, but added that “the length of time does seem on the long side.”

Chief Justice Richard Wagner, who succeeded Beverley McLachlin in December, took up his post by announcing that he intended to make the court more understood and transparent to ordinary Canadians. The court has since begun issuing plain-language summaries of rulings. Chief Justice Wagner declined an interview for this article.

A court spokesman, executive legal officer Gib van Ert, declined to answer questions for the record about the policy, such as why 50 years was deemed an appropriate period.

National archivist Guy Berthiaume also would not be interviewed about the agreement.

The youngest judge on the current court, Justice Russell Brown, heard his first case at 50 and would have to reach 100 to outlive the embargo. The agreement appears to bind future judges of the court.

It creates no guarantee of access even after 50 years. “The Court … reserves the right, exercisable in its sole discretion, to terminate its deposit of Collegial Documents with LAC [Library and Archives Canada],” the agreement says.

The agreement also distinguishes “Collegial Documents” from “Chambers Documents.” The chambers documents are a judge’s drafts of a decision or notes or communications with law clerks on a case. These remain their personal property. They do not need to donate them to the national archives, or any archives. (If they donate them, they are appraised and the judges receive a charitable tax receipt. The collegial files are treated as court property and therefore not deemed a charitable donation.)

The lockdown of collegial files is so tight that even judges who wish access to them must seek the chief justice’s permission in writing.

The Supreme Court of Canada did, however, leave itself room to move the 50-year embargo period, up or down. The agreement provides for a review every seven years or less, “to determine whether any adjustments need to be made.”

Ryan Reft, a historian who oversees the legal collections in the U.S. Library of Congress manuscript division, told The Globe that U.S. judicial files range from open to restricted. The files of former judges Mr. Blackmun, Thurgood Marshall and William O. Douglas are open. Ruth Bader Ginsburg, on the other hand, stipulated that case files be made accessible only after her death, and the deaths of all her colleagues who sat on the case. Others make the files accessible when all the justices from a case are retired.

The papers of Supreme Court justices “are among our most used collections,” Mr. Reft said.

In a foretaste of what Canadians in 2068 might think of the availability of today’s case files, the court’s news release announcing the agreement pointed to cases now available at the archives, such as Roncarelli v Duplessis, from 1959, and the Margarine Reference from 1949. These cases appear to be of interest only to the most specialized audiences.

Supreme Court to hear case on citizenship of Toronto-born children of Russian spies
May 10, 2018 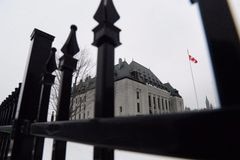