Parliament has the authority to criminalize mandatory genetic testing and the forced disclosure of voluntary genetic test results, the Supreme Court of Canada has ruled.

The ruling has wide implications for insurance companies and employers, who face steep punishment if convicted of using information from genetic tests for insurance or employment purposes. It also has implications for public health, in affirming that patients may be tested without fear the tests will someday be used against them.

In 2017, Parliament made it a crime punishable by up to five years in prison, and a $1-million fine, to force someone to take a genetic test as a condition of signing a contract, or of receiving products or services. Genetic tests can reveal a predisposition to particular diseases.

The question for the Supreme Court was whether Parliament had the power to criminalize compulsory genetic tests and the mandatory disclosure of test results where the tests were taken voluntarily. Under Canada’s original Constitution of 1867, criminal law falls within federal authority but insurance and laws about contracts are within provincial authority.

Quebec argued that the real subject of the Genetic Non-Discrimination Act was the regulation of genetic information for insurers and employers. It had asked the Quebec Court of Appeal to give an advisory opinion on the law’s constitutionality, and in 2018 the appeal court decided by a 5-0 count that the law was not within federal authority. The Canadian Coalition for Genetic Fairness, an advocacy group that includes the Alzheimer’s Society and the Canadian Cancer Society, appealed that ruling to the Supreme Court.

Deciding whether the law was truly criminal in nature meant looking at whether it imposed a prohibition, and a penalty, both of which it did; but it also meant looking at the law’s purpose and effects – what the law is really about, the court said.

The majority in the 5-4 ruling said the law’s essence was the protection of dignity, autonomy, privacy and health, which it described as appropriate subjects for criminal law. The minority said it was about contracts. The majority split into two groups in explaining its views.

“Parliament is entitled to use its criminal law power to respond to a reasoned apprehension of harm, including a threat to public health,” Justice Andromache Karakatsanis wrote for the larger group, which also included Justice Rosalie Abella and Justice Sheilah Martin.

An umbrella group for the insurance industry, the Canadian Life and Health Insurance Association, intervening in the case, argued that the law deprives insurers of critical information, “undermining a central principle of insurance underwriting: the equality of information between insurers and insureds,” it said in a written argument filed with the Supreme Court.

Kevin Dorse, a spokesman for the association, said Friday that it respects the ruling and will “continue to adhere to the Genetic Non-Discrimination Act.”

The law was unusual, in that it began with a private member’s bill in the Senate, sponsored by now-retired senator James Cowan. The Liberal government, then in a majority, opposed it, but permitted its members to vote as they wished. The law passed by a vote of 222-60.

Also unusual, the attorney-general of Canada (at the time, Jody Wilson-Raybould), opposed the law in the Quebec Court of Appeal, leaving a federal law without its foremost defender. The Quebec appeal court, and later the Supreme Court, appointed Montreal lawyer Douglas Mitchell as a friend of the court to argue in support of the law. When the law reached the Supreme Court, David Lametti was Attorney-General; although he had voted for the genetic law, his department opposed the law in court, saying its purpose, though laudable, was about regulating insurance contracts.

Mr. Cowan said in an interview Friday he was not aware of any instance in which a federal or provincial attorney-general had opposed a law in court that had been passed by their legislature.

He said that Toronto’s Hospital for Sick Children had made the case to him and Liberal MP Rob Oliphant, who sponsored the bill in the Commons, that parents were balking at genetic tests that could have helped determine what health problems their children were facing, because of the risks that the information would one day be used against them.

Mr. Oliphant said in an interview Friday that “so much pressure was put on me not to do this.” He declined to say from whom, other than “a variety of sources.” He praised Prime Minister Justin Trudeau for allowing Liberal MPs to vote their conscience on a private member’s bill.

Mr. Lametti declined to say why the government had opposed a law in court that had been passed by Parliament. He said in a statement that he is reviewing the ruling, and that those who take genetic tests “must have confidence their privacy will be respected and that the sensitive information they obtain will not be used to discriminate against in them in any capacity.”

Mr. Mitchell said in an interview that the ruling will “assist in improving the health of Canadians, and protecting vulnerable Canadians.”

Joe Arvay, a lawyer representing the Coalition for Genetic Fairness, called it “a huge relief for those facing the dilemma of getting, for example, insurance or getting a genetic test.” Co-counsel Bruce Ryder said the ruling opens the door to the enactment of new offences to address environmental harms, invasions of privacy and discrimination. 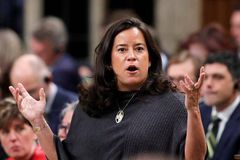 After heavy lobbying from all sides, MPs to debate, vote on genetic testing bill
March 7, 2017
Follow Sean Fine on Twitter @seanfineglobe
Report an error Editorial code of conduct
Due to technical reasons, we have temporarily removed commenting from our articles. We hope to have this fixed soon. Thank you for your patience. If you are looking to give feedback on our new site, please send it along to feedback@globeandmail.com. If you want to write a letter to the editor, please forward to letters@globeandmail.com.
Comments