Two psychiatrists now say a man accused of killing two police officers and two civilians in Fredericton in 2018 is fit to stand trial, but a jury will have to make the final determination.

Matthew Raymond appeared in Court of Queen’s Bench in Fredericton Monday via a video link from the Restigouche Hospital Centre in Campbellton, N.B., where he is currently being held.

The court was told that a second psychiatrist observed Raymond over the weekend. Another doctor presented his report in December. While the reports from the two doctors have not been released, Justice Fred Ferguson said both had found Raymond fit.

A review board will meet Jan. 15 to discuss his detention and any treatment.

The Crown and defence lawyers are to decide on a date for a fitness trial with a jury, which is required before a criminal trial on the four counts of first-degree murder can proceed.

A previous jury found Raymond unfit in October, leading to a 60-day treatment period that included him receiving antipsychotic medication.

“Our position is that Matthew Raymond is currently fit,” defence lawyer Nathan Gorham said outside the court. “I’m able to communicate with him very effectively. We expect to present a defence at trial.”

Gorham said he’ll make application for the criminal trial to be heard by judge alone.

“We believe that the legal requirements in this case warrant a judge-alone trial. And, although the Criminal Code says a trial on a murder charge has to be with a jury unless the Crown consents, our position is the unique circumstances of this case the judge could dispense with the Crown consent,” he said.

Gorham said such cases are rare. “We believe this is one of those cases, though.”

Robichaud and Wright were killed as they loaded their car for a trip, and the officers were shot as they responded to the scene. 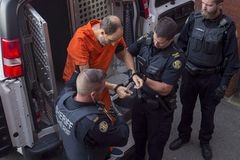