Friends and family of a teenage girl whose body was found by the side of a road in Quebec’s Laurentians regions sat in disbelief on Friday as a family friend of over two decades was charged with first-degree murder in her death.

Francois Senecal was charged Friday in a courtroom in St-Jerome with the murder of 13-year-old Oceane Boyer.

The handcuffed 51-year-old stared at the ground as he appeared in front of a packed courtroom, where loved ones of the victim wiped away tears.

At one point, Quebec Court Judge Maria Albanese told Senecal to lift his head to be sure he understood her words.

Quebec provincial police arrested Senecal on Thursday, a day after Boyer’s body was found by a public road in Brownsburg-Chatham, northwest of Montreal.

“I have to get outside,” she could be heard saying at the end of the hearing.

Earlier Friday, she confirmed on Facebook that Senecal was a longtime friend of the family.

The accused’s daughter, Alexandra Senecal, burst into tears when she saw her father in the prisoner’s box.

Afterwards, she tearfully said she couldn’t believe her father was accused of killing a young girl who had affectionately called him “uncle Francois.”

“(Oceane) came to sleep over at the house, she taught my daughter to swim, at my father’s place,” she said outside the courtroom.

She said her father had appeared devastated and had “sobbed in my arms” when he’d heard the girl was missing. The two families had known each other forever, she said: “We saw Oceane born.”

Crown prosecutor Steve Baribeau said there is still more evidence to be disclosed to Senecal’s lawyer. He did not say whether more charges would be added.

Senecal will remain in detention until his next court appearance on March 4. He is forbidden from contacting the family of his victim or any potential witnesses.

Roger Louis-Seize, who worked at a campground where the Boyer family had spent some summers, was among those who came to court to support the family.

He remembered Oceane as a happy girl who once spent a $100 gift she’d received on school clothes instead of toys.

“She was a little person full of love,” he said.

Meanwhile, a school board announced it was sending a support team to the high school Boyer attended in Lachute, about 60 kilometres northwest of Montreal. 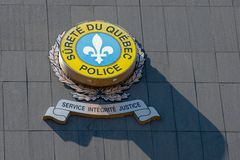