After he took a solemn oath and received his Canadian citizenship Wednesday, Syrian refugee Tareq Hadhad said he was looking forward to becoming an unofficial ambassador for Canada.

However, the well-known Nova Scotia businessman, whose chocolate-making company continues to attract customers from around the world, said he had some important tasks to complete before taking on that role.

“I’m going to Tim Hortons, and I’m going to get a double-double with a toonie, and I’m going to watch a hockey game on Saturday in Ottawa,” Mr. Hadhad said with a big grin after a citizenship ceremony inside the Canadian Immigration Museum at Pier 21 in Halifax.

“There’s nothing more Canadian than getting your Canadian citizenship in January in the middle of the winter – having to endure all of that ice and snow out there. … I can’t wait to get out in the world and say, officially, ‘I’m a Canadian.'“

The founder and chief executive of Peace by Chocolate, based in Antigonish, N.S., arrived in Canada in December, 2015. He and his family were among a wave of 25,000 refugees who fled the brutal civil war in Syria and eventually settled in Canada in late 2015 and early 2016.

Last June, Prime Minister Justin Trudeau made a point of praising the Hadhad family during a visit to the U.S. capital, where he presented some Peace by Chocolate treats to U.S. House Speaker Nancy Pelosi.

The Prime Minister said the family fled their home in war-torn Damascus in 2012 after their factory – part of a 20-year-old business run by Mr. Hadhad’s father, Assam – had been bombed. They were living in a refugee camp in Lebanon when they received approval to move to Canada.

By early 2019, only three years after Peace by Chocolate was founded, Mr. Hadhad announced the company had plans to hire 50 refugees by 2022.

“Since coming to Canada, we had one mission, a message to share with the world: It’s peace,” Mr. Hadhad said Wednesday.

“We should not take peace for granted. Peace is something we can lose in the blink of an eye. It’s the noblest thing that we should fight for.”

Mr. Hadhad was dressed in a sharp, three-piece suit when he accepted his citizenship certificate while clutching a small Canadian flag. He was among 49 people granted citizenship at the ceremony attended by federal Immigration Minister Marco Mendicino and Nova Scotia Premier Stephen McNeil.

“It’s amazing,” Mr. Hadhad said after the ceremony as his family encircled him.

Mr. Mendicino reminded the crowd that the Hadhad family had lost almost everything by the time they arrived at the refugee camp.

“They were unsure of their safety and their future, but they made it here to Canada,” Mr. Mendicino said. “And not only are they safe, they are thriving.”

Mr. Hadhad wrote his citizenship test last month and says he passed with a perfect score. The rest of his family are expected to receive their citizenship later this year.

“This is just a wonderful story,” Mr. Mendicino said, adding that his own grandparents were immigrants from Italy.

“It demonstrates that immigration is a true hallmark of our history, but it’s also the key to our future. … It’s part of who we are as a people.” 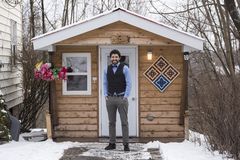