The Ontario government and its elementary public teachers’ union have renewed negotiations on a new contract, with the Education Minister describing the talks as “productive.”

The government’s negotiators were in the second day of talks on Thursday with the Elementary Teachers’ Federation of Ontario (ETFO), the country’s largest education union with 83,000 members, as the clock ticked toward a deadline that would ramp up strike action unless a deal is reached by the end of the week. Talks will continue Friday.

ETFO has warned that it would stage a full provincewide walkout on Feb. 6, accompanied by a week of rotating strikes that would hit every public board on a certain day, if a deal is not reached by Friday. That job action would continue each week, shutting down schools twice a week and leaving thousands of parents scrambling for childcare.

Although class sizes and supports for special-needs students are among the issues, the government has maintained that the main sticking point in negotiations has been salaries. Education Minister Stephen Lecce said the unions are asking for 2 per cent – cost-of-living increases in line with inflation – in the face of its wage-cap legislation meant to limit public-sector pay increases to 1 per cent.

A government document obtained by The Globe and Mail showed that 80 per cent of full-time high-school teachers and about 66 per cent of elementary teachers have 10 years of experience or more, meaning they would be at the top of the pay grid. The grid allows salaries to climb over 10 years based on education and experience.

According to provincial collective-agreement salary figures compiled by Statistics Canada, Ontario’s long-serving primary and secondary teachers are the best-paid of any province. Teachers at the top of the union pay scale earn $97,474, according to the data, while the average for all other provinces sits at $86,059.

An analysis of Ontario’s Sunshine List – a list of salaries and taxable benefits for all provincial public-sector employees earning at least $100,000 in a given year – found 10,038 teachers earning at least that much in 2018, the most recent year for which data were available. That’s more than four times the figure for 2014, when just 2,502 teachers made the list.

According to figures from the Ministry of Education, there were more than 125,000 full-time teachers in Ontario in 2017-18. The 10,000 teachers on last year’s Sunshine List account for roughly 8 per cent of that total.

The Globe’s analysis looked only at teachers without additional duties, excluding those who were also principals or union administrators, for example. The analysis is also limited due to the list’s $100,000 minimum, since only a fraction of the province’s teachers earned more than that amount.

The government values the work of educators, but the majority of the education budget goes toward salaries, said Alexandra Adamo, a spokeswoman for Mr. Lecce,.

“[The] information also confirms that a vast majority of educators are in the highest position on the salary grid,” she said, referring to the document obtained by The Globe. "This data underscores our commitment that further investment in education ought to be directed to the front lines, and not to augmenting compensation regimes.”

A spokeswoman for ETFO said on Thursday that president Sam Hammond would not be making public comments while talks were happening between the parties.

Harvey Bischof, president of the Ontario Secondary School Teachers’ Federation (OSSTF), said his members should be compensated for delivering a quality education. (The province’s students are noted for their strong performance in international tests.)

He said his members have fallen behind in compensation over the past seven years as collective agreements included minimal increases or none. He said that if cost-of-living increases were built in, the focus at the bargaining table could be solely on improvements to public education.

“We’re not looking to catch up. We’re simply looking to keep up from here on in and then we wouldn’t be having this fight,” Mr. Bischof said.

The issues in this round of negotiations are not only about wages, but the government’s plans to increase class sizes and mandate high-school students do two online courses, he said.

There have been no talks scheduled between OSSTF and the government, and the union will resume its rotating strikes on Tuesday at select boards.

“My members are absolutely dedicated to the work they do for students and for [Mr. Lecce] to discredit that commitment and to pretend that it is all about compensation … just heightens the tensions,” he said.

Liz Stuart, president of the Ontario English Catholic Teachers’ Association, said that although Premier Doug Ford and Mr. Lecce want the public to focus on the issue of compensation “as a way of distracting from their devastating cuts, the public is not fooled – they know this is just one of the many issues at the negotiating table.” 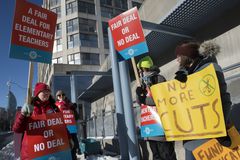 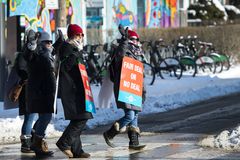 Follow Caroline Alphonso, Tom Cardoso and Jeff Gray on Twitter @calphonso @tom_cardoso @jeffreybgray
Report an error Editorial code of conduct
Due to technical reasons, we have temporarily removed commenting from our articles. We hope to have this fixed soon. Thank you for your patience. If you are looking to give feedback on our new site, please send it along to feedback@globeandmail.com. If you want to write a letter to the editor, please forward to letters@globeandmail.com.
Comments