Mia Rabson
Ottawa, Ontario
The Canadian Press
Published May 18, 2021 Updated May 19, 2021
Comments
Text Size
Please log in to listen to this story. Also available in French and Mandarin. Log In Create Free Account

Canada’s Chief Public Health Officer said Tuesday she expects Canadians who got the Oxford-AstraZeneca in the first round of vaccinations will be able to choose which vaccine they get for their second dose.

Dr. Theresa Tam’s comments came hours after a small Spanish study on mixing and matching vaccines reported that giving a Pfizer-BioNTech shot for the second dose after AstraZeneca is safe and produced twice as many antibodies as a second dose of AstraZeneca.

The National Advisory Committee on Immunization, known as NACI, is still awaiting further data from another mixing-and-matching study under way in Britain, but Dr. Tam said advice on second doses should be ready before most people are due to get their second vaccination.

“It is likely that people in Canada who’ve received one dose of AstraZeneca will have a choice for their second dose,” she said at a news conference from Ottawa.

The decision could affect more than 2.1 million people vaccinated with AstraZeneca, and is related mainly to safety issues for that vaccine. Dr. Tam said there are now 21 confirmed cases of vaccine-induced thrombotic thrombocytopenia, or VITT, the rare but serious blood-clotting disorder potentially linked to AstraZeneca.

Another 13 cases are under investigation. Three women have died.

NACI advised last month that people at low risk of getting COVID-19 should get either Pfizer or Moderna, leading many to wonder if they should risk getting another dose of AstraZeneca.

Dr. Tam and Health Minister Patty Hajdu said there will be enough doses of vaccine for AstraZeneca recipients regardless of which kind it is.

“I think everybody’s anxious to make sure people who got the first dose of AstraZeneca do have the ability to get that second dose,” Dr. Tam said.

She has said that a less physically distanced summer will depend on curbing case rates, reducing hospital patients and getting more vaccines into arms. She said if 75 per cent of eligible Canadians – right now that’s people over 12 – get one dose, and 20 per cent get both doses, the summer could hold the promise of backyard barbecues, camping, outdoor picnics and evenings out with friends on a restaurant patio.

“We’re not there yet, but I am really hopeful because of how fast some of the vaccines are going in the arms,” she said.

On Tuesday, about 17.6 million Canadians had at least one dose, or 55 per cent of people over the age of 12. Another 1.5 million have both doses, about 4.5 per cent of the eligible group.

Many provincial governments aren’t following the national suggestions. Saskatchewan Premier Scott Moe, who said 75 per cent of people over 40 now have one dose, intends to move to step one reopening as planned May 30.

That means in less than two weeks, restaurants can open for limited indoor services, and people can socialize with up to 10 people indoors or outdoors at private homes.

Saskatchewan said it intends to start vaccinating teenagers in early June, hoping to have most 12- to 17-year-olds vaccinated by the time school ends for the summer.

The province also released a plan for starting second doses, cutting the expected wait from 16 weeks to 13 weeks for most people.

Quebec said Tuesday 75 per cent of all adults have either received one dose or have their first appointment scheduled.

Quebec Premier François Legault unveiled a detailed, months-long reopening plan that will start in the next two weeks with most Quebec schools fully reopening, eliminating all of the province’s curfews on May 28, and allowing people to gather with up to eight people in their backyards.

Mr. Legault said if 75 per cent of Quebeckers over the age of 12 get both doses by the end of August, the provincewide public face mask requirement will be lifted.

Dr. Tam said it’s not just about vaccines though, but also the level of COVID-19 around, and there were many positive signs on that front as well.

While Canada reached the grim milestone of 25,000 deaths from COVID-19 on Tuesday morning, the number of daily deaths has fallen in the last week from 49 to 43.

She warned that reopening things too soon could be damaging.

“We have to be very cautious about that downward path,” she said. “I can’t tell you right now when we’ll get to the bottom of this. Last time we only got two-thirds of the way down the curve and then with some relaxation of restrictive measures we went back up again. And so there’s still a chance that could happen if we’re not careful.”

Trudeau says he knew about investigation into general overseeing vaccines weeks ago
May 18, 2021 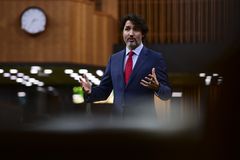 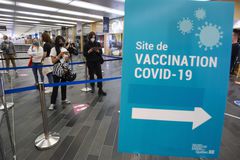 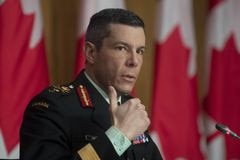