Kristen McLeod’s 16-year-old daughter was on her phone last week when she saw a picture of four of her friends hanging out together. She knew that even if she had been invited to join them, she wouldn’t be able to because of the importance of maintaining physical distancing. Still, it stung.

“Her face said it all. She’s left out because other people don’t take it seriously,” said Ms. McLeod, a writer who lives in Regina. “She’s frustrated.”

It is difficult parenting teenagers at the best of times, and even more so as the coronavirus pandemic leads to shutdowns and states of emergency across the country and Canadians are asked to practise physical distancing. Many teenagers who might otherwise be out with friends, at school or playing sports now find themselves having to isolate at home. Particularly difficult is the fact that some don’t see the novel coronavirus as a threat to their own health and well-being.

The challenge for parents is to make clear to their teens the gravity of the situation while still letting them enjoy some modicum of independence and a social life while at home.

“It’s really acknowledging that people are going to have a huge amount of emotions around it,” said Dr. Karyn Gordon, a leadership and relationship expert and author of Dr. Karyn’s Guide to the Teen Years.

Explaining to teens the full risks involved, not just to themselves but to others, is essential, Dr. Gordon said. For some parents, this is the main struggle.

“I’ve been talking to them ad nauseam about COVID-19 and the need to practise distancing,” said Naomi Smith, a mother of four, including two teenage boys aged 15 and 16, who lives in Kamloops, B.C.

Her teenagers want to go out and don’t see the risk in doing so. “The boys aren’t taking it seriously and I worry that they will bring it into our home, despite my best efforts. The stakes aren’t high for them. They feel invincible.”

While adults 65 and over are at higher risk of having severe COVID-19 illness, everyone is susceptible to the disease. That’s been a difficult message for Ms. Smith to impart to her teens, along with the public-health message to wash hands for at least 20 seconds to help prevent getting sick.

“It’s really tough. Raising teenagers is hard enough on its own," Ms. Smith said. “Getting them to wash their hands at all, let alone properly and frequently, is a real challenge at the best of times. Add a pandemic to the mix, and the heightened stress around this, there is conflict every day. I worry about how we will get through the next few months.”

“My son said today that we are sending mixed messages. On the one hand, we don’t want him to sit on the couch and play Xbox all day, but on the other hand, we won’t let him get together with friends.”

Alison Zidner, an early childhood educator who lives in Oakville, Ont., sympathizes with her teen daughter’s desire to hang out with her peers and get away from her parents, especially when friends are doing just that.

“There’s some friends that think it’s a joke, it’s fine, they’ll survive it,” Ms. Zidner said. “But as I said to her the other day, ‘Imagine if you caught it and gave it to someone that you cared about and they died?’”

Most teenagers who get that message will act accordingly, Dr. Gordon said. Taking care of their well-being while isolated, however, requires planning and structure.

“With teens, you want to put them in the driver’s seat,” she said, advising that teens should plan for academic time, social time and physical activity each day.

Ms. McLeod said her daughter is mature for her age, but she’s still a teenager. A runner who was training to go to the Canadian Track and Field Championship this summer, Ms. McLeod’s daughter is now running on the treadmill at home, often late in the evenings. That sometimes means she is late for family breakfast at 9 a.m., part of the schedule the McLeods are maintaining, and she sometimes does not get up until after 10 a.m.

But Ms. McLeod is trying to give her daughter as much leeway as possible – to a point. “It’s easy to convince my kids of the seriousness of this. What isn’t easy is getting a 16-year-old to keep a schedule. No, this doesn’t mean you can stay up all night. No, it doesn’t mean endless hours on social media,” she said.

What does school look like without the classroom?
March 20, 2020 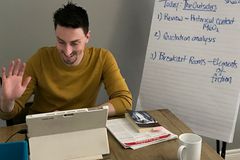