About 120 kilometres north of Thompson, Man., a school bus sits parked across the width of Provincial Road 280. In front of the yellow bus, bright orange pylons are spaced apart next to black and neon-yellow signs that shout: “Protecting Our People Against COVID-19."

The barricade went up May 15, when leaders of Tataskweyak Cree Nation locked down access to a Manitoba Hydro work camp further down the dirt road. First Nations in this remote region of northern Manitoba are worried about a plan by the provincially owned utility that would bring 1,000 workers to the Keeyask camp to continue construction of a hydroelectric generating station.

The demonstration is being referred to as a blockade, but that’s not how Chief Doreen Spence of Tataskweyak Cree Nation sees it.

“We just prefer the word 'lockdown’ now, because we’re trying to lock out this COVID-19 virus," Chief Spence said. None of Manitoba’s 292 cases are in the province’s First Nations or northern communities.

Across the country, many small and remote communities are also voicing concern as pandemic restrictions on work and travel are eased.

On Thursday, Prime Minister Justin Trudeau was asked about the communities’ right to protect their members using the barricades.

“We need to make sure that all different orders of government, including Indigenous governments, are working together with the same goal, which we all share, which is keeping Canadians as safe as possible, recognizing that certain communities and certain individuals are more vulnerable,” he said.

The Tataskweyak barrier has stayed put even after two RCMP officers on Wednesday delivered an injunction to Chief Spence. The court order obtained by Manitoba Hydro says Tataskweyak Cree Nation can’t block or prevent access to the Keeyask site.

But leaders of the four Keeyask Cree Nations – Tataskweyak, York Factory, War Lake and Fox Lake Cree Nation – say they’re not going anywhere until Manitoba Hydro works with them to develop a new plan to resume construction and manage the movement of workers. Chief Spence said they’ve been left out of the planning despite having weekly telephone calls with Manitoba Hydro since mid-March.

In the meantime, they want Manitoba Hydro to keep the work site on a “maintenance and care” schedule, which would reduce the number of workers required.

“I’m not asking that it be shut down permanently," Chief Spence said. "There has to be plans in place that basically protect the employees there, protect our members, protect all of northern Manitoba, maybe even Canada.”

Manitoba Hydro announced on Thursday that it will suspend the shift change while it works to resolve the blockade.

The Keeyask generating station project was developed in partnership between Manitoba Hydro and the four Keeyask Nations in 2009, and construction started in 2014.

While Manitoba Hydro administers and operates the project, the First Nation partners have seats on the project’s board of directors and a right to own up to 25 per cent of the partnership. The First Nations also have service contracts with the project.

Construction, which is expected to be completed next year, was scaled back in March due to the pandemic. About 700 workers volunteered to stay for eight weeks instead of their usual three-weeks on and one week off rotation to limit travel in the region.

But at the beginning of May, Manitoba Hydro said the workers needed relief and announced plans to return to standard operations.

“Workers who rotated prior to that are scheduled to return to site,” said Scott Powell, director of corporate communications for Manitoba Hydro. Mr. Powell said "not everyone leaves or arrives at once.”

But some workers are coming from outside the province and the country. And that’s what has local communities worried.

Mr. Powell didn’t specify where the workers are from, but said 100 to 150 are from outside Manitoba and fewer than 10 foreign workers are expected.

“When one person contracts this virus it’s like 12 people being hit," he said, pointing to overcrowded conditions in First Nation homes. "It is a major concern because, so far, the First Nations have done well and they’ve done above and beyond what is required to contain the virus and prevent it from coming into the First Nations.”

Manitoba Hydro said it has listened to the concerns of its First Nations partners and changed its pandemic plans. Mr. Powell said workers returning from outside the province and country are being isolated in Winnipeg hotels for 14 days, then tested for the virus.

Results come back within hours, and if they’re negative, the workers can travel by private charter north to Gillam, Man., where they take a shuttle bus directly to the work site. “They are not permitted to visit any communities,” Mr. Powell said.

“It was a plan already that they made without sharing beforehand with us," she said. “We’re supposed to be considered partners."

“In one sense, you feel that this is an ongoing, paternalistic and colonialistic approach to dealing with First Nation people by just applying the law to make sure they’re kept out of the way,” he said.

Since the school bus was parked on Provincial Road 280, two more barricades have gone up elsewhere to prevent workers from accessing the Keeyask camp. Robert Wavey, a member of Fox Lake Cree Nation, said busloads of workers usually travel about 30 kilometres from Gillam to the work site using the south access road that they’ve had blocked for over a week.

Mr. Powell said about 300 workers remain at Keeyask, including some who have been there longer than eight weeks.

“The inability to move supplies such as food and other essential provisions past the blockades is now putting those workers at risk,” he said.

Court injunction calls for removal of blockade in Manitoba set up over COVID-19 concerns
May 19, 2020 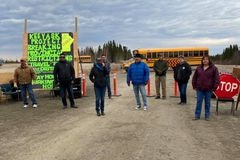 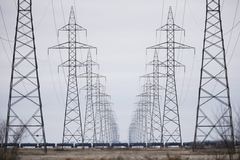