This is proving to be a banner year for measles.

Worldwide, cases are up almost 50 per cent, with massive outbreaks across Africa, Asia, South America and Eastern Europe, numerous outbreaks in Western Europe and five significant outbreaks in the United States, including in the border states of New York and Washington.

Not to mention an outbreak in Vancouver and, no doubt, more carnage to come.

If only there were some cheap, effective, accessible method to stop the spread of measles!

A vaccine has been available since 1963. But it only works if you get it into children, and that’s getting more difficult by the day.

The World Health Organization has declared “vaccine hesitancy” to be one of the top 10 health threats in the world. The only thing spreading faster than measles – the most contagious disease on Earth – is fear of vaccination. Yet vaccines are one of the most effective health interventions in the history of humanity.

Prior to the availability of a measles vaccine, for example, 2.6 million children annually died of the “benign” childhood disease. Today, that number is down to 109,000. But it should be zero.

In some parts of the world, the barrier to childhood vaccination is social turmoil: Infectious diseases such as measles thrive in poverty and war. But in the Western world, where vaccination is cheap and accessible, the barriers are all self-imposed.

Above all, there are stubbornly powerful myths that drive vaccine hesitancy.

Myth #1: Vaccines cause autism. The father whose children are at the centre of the Vancouver outbreak cited this as the reason they were not vaccinated. A 1997 study by Andrew Wakefield – later shown to be fraudulent – suggested that measles-mumps-rubella (MMR) vaccine was to blame for the rise in autism. It is truly puzzling how difficult it is to debunk this nonsense.

Myth #2: Vaccines contain unsafe toxins. People worry about trace amounts of formaldehyde, mercury or aluminum that are sometimes used as preservatives in vaccines. There is no evidence the minute quantities of these substances are harmful, and the infections prevented are far more dangerous.

Myth #3: Natural immunity is better than vaccine-acquired immunity. “Natural immunity” means catching a disease and getting sick. In the case of measles, that would mean about a 1-in-500 risk of death. With few exceptions, the immunity conferred by vaccines is excellent.

Myth #4: Vaccines aren’t necessary because the infection rate is already so low. It is true that because of “herd immunity,” the non-vaccinated will be protected if a large percentage of the population is vaccinated. But once the rate falls below 90-95 per cent, the risk increases for everyone – and especially for those with compromised immune systems such as pregnant women, babies, the elderly and people with health conditions such as cancer.

Myth #5: Better hygiene is responsible for the drop in infections, not vaccines. There is no doubt that better sanitation, nutrition and medical treatments have reduced death rates. But in developed countries such as Canada, the infection rate for measles only fell precipitously after the introduction of vaccination.

More troublesome than the myths themselves is the political and social environment that has allowed unscientific and sometimes nonsensical theories to flourish.

Parents who are anti-vaccine or vaccine hesitant often cite the greed of Big Pharma and express profound skepticism about modern medicine. They turn instead to quack remedies and “alternative” practitioners, rail about “medical freedom” and opt out of vaccination for all manner of pseudo-philosophical reasons.

The hesitancy is amplified by the current wave of populism and anti-government sentiment and, of course, social-media platforms that allow lies to spread around the world faster than the truth can put on its pants.

Ultimately, failing to vaccinate one’s children is short-sighted and selfish. It puts not only your children at risk but others in the community, and burdens the health system. Vaccine skeptics are not evil people. They want the best for their children but many feel disenfranchised and desperately want to control some aspect of their lives.

Making vaccination mandatory and punishing non-compliance with actions such as expulsion from school or daycare is problematic because it tends to be the children who suffer. It also gives fuel to those already mistrustful of the authorities.

The challenge we have today is not only how to vaccinate against childhood illnesses but to inoculate the population against dogma and fear-mongering.

The soaring rates of measles remind us that nothing is more exquisitely contagious than ignorance. 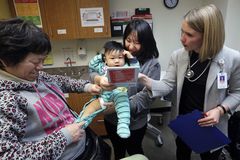