The Bluenose is pictured on the starboard tack, elegantly riding a brilliant froth of waves as it manoeuvres out to sea. But what really catches the eye is not the famous schooner – it’s the sky behind it. Instead of a pale metallic sheen, that portion of the collector’s coin is coloured like a vivid sunset that transitions from golden pink near the horizon to a deep blue by the time it reaches the top of the ship’s main mast.

Amazingly, the effect was achieved without the use of dyes, inks or pigments.

The coin is both an art piece and a test of a surprising new technique dubbed “plasmonic colouring” that was developed by the Mint together with researchers at the University of Ottawa. It was created with the help of a picosecond laser, which can blast its target with precise, high-energy pulses of infrared light that last only one trillionth of a second. Researchers have discovered that by applying the pulses in just the right way, they can microscopically tailor a coin’s metallic surface so that it transmits only certain wavelengths of light while absorbing others. In essence, instead of colouring a coin, the technique allows a coin to colour the light it reflects.

The made-in-Canada innovation could have a range of future applications from anti-counterfeiting strategies to medical sensors. But what has numismatists (collectors of coins, currency and medals) talking is the use of the technique as a tool for creating colourful coins without additives or coatings that would reduce the purity of the metal.

“It’s groundbreaking,” said Henry Nienhuis, president of the Royal Canadian Numismatic Association. “This pushes the envelope in the minting process.”

The reaction is good news for the Mint, which is looking to generate revenue by issuing special coins that wow collectors with something no one has achieved before.

“We wanted to create interesting optical effects on coins," Dr. Brooks said. “And so we began experimenting.”

The experiments took an interesting turn in 2012, when Jean-Michel Guay, who was then a graduate student in physics at the University of Ottawa, started a collaborative project that involved working with the picosecond laser, which the Mint had just acquired. For Dr. Guay and his colleagues at the university, it was a golden opportunity – literally. The combination of the state-of-the-art tool and an abundant supply of precious metals, including gold, silver and platinum, allowed them to pursue scientific questions that would be out of reach in a campus laboratory.

“It’s rare to have access to a vault,” Dr. Guay said. “By working with the Mint, we became world leaders in the field.”

At first, it was not clear what the effort would yield. Dr. Guay started off using the laser as an etching tool, trying to see if he could put fine lines on silver to create a rainbow effect through diffraction (the same phenomenon that produces colours when light reflects off the grooves of a compact disc).

His challenge was the way that silver responds to the energy from a pulsed laser. Rather than quickly transferring the energy into the bulk of the metal – as occurs with steel, for example – pure silver melts and splatters microscopically small droplets around the location where the laser pulse has contacted the surface.

Dr. Guay was looking for ways to solve this problem when he noticed that the silver he was working with was turning yellow in the area where it was hit with the laser. “I was trying to erase it,” he said, describing his initial attempts to rub the unexpected discoloration away.

Intrigued, he began to investigate the phenomenon, and soon discovered he could create purple and blue by varying the settings of the laser pulses. In time, he and colleagues learned how to generate a full palette of colours. He then found that, with different settings, he could reproduce the same effect on other metals, including gold. Importantly, unlike diffraction, the plasmonic colouring effect does not change with viewing angle, although the more quickly the technique is employed, the softer and more pastel-looking the colours become.

The explanation for what is going on comes down to the fact that the droplets deposited by the laser and their average separation are both much smaller than the wavelengths of different colours of visible light. At the scale of billionths of a metre, the distribution of droplets can affect the way the metal responds to incoming light, causing it to selectively transmit some wavelengths and absorb others. Dr. Guay compares the effect to a tuning fork, which resonates with a specific note that is determined by the length of the fork’s tines.

Others have stumbled upon similar effects, Dr. Guay said. Even ancient Roman craftsmen knew they could colour glass by adding metal powders that were sufficiently fine, although they did not know why it worked. But this is the first time such a technique has been so thoroughly understood and mastered.

After experimenting with test patterns on metal blanks, Dr. Guay and experts at the Mint tried silver coins. Their first efforts involved applying colour to silver coins that the Mint had previously issued. In one attempt, the laser was used on a $20 silver coin to tinge the wings of two butterflies with delicate shades of metallic purple and gold. At the same time, the team worked to overcome practical obstacles, including how to prevent the colours from fading once the silver oxidized.

By 2017, the scientists on the project were asked to submit ideas for a large-size collectors’ coin that would showcase the technique. While watching the setting sun from his family’s cottage on a lake near Smiths Falls, Ont., Dr. Guay suddenly had an idea. The smooth gradation in hue from red to blue in a sunset sky would be ideal for showing what the technique could do that was difficult with more conventional methods of colouring metal. The idea evolved into a design with the Bluenose in the foreground. Last year, a few samples were produced.

Because each coin needs to be worked individually with the laser – a process that takes about two hours for a piece of that size – it’s unlikely that more than 100 of the five-kilogram Bluenose coins will be made. Specialized silver coins of that size are typically valued at more than $10,000. The Mint is tentatively planning to auction off a limited number at a charity event next year that would mark the upcoming centenary of the launch of the Bluenose. While the technique is not being considered for mass circulation coins, Mr. Nienhuis said he hopes it will eventually migrate to smaller collectible coins that can be bought at more modest prices.

“That’s where I find it more exciting,” he said. “I’m looking forward to seeing how [the process] is used in the future."

The technique has been patented, and Dr. Guay and his colleagues have published technical papers on the underlying physics. Dr. Guay said he hopes to start a project to look at the possibility of using lasers to colour thin metal foils for use in paper currency. The technique may also find applications in medicine, for example, by using the optical properties of a metal sensor to distinguish between healthy and diseased cells.

In the meantime, Dr. Brooks said, interest in the technique from the international minting community has been growing. “People are really, really curious about it," he said, showing a slight smile. “Obviously, we don’t share too much.” 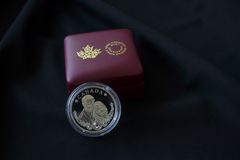 Royal Canadian Mint says phoney gold bar was a counterfeit attempt
October 30, 2017
Royal Canadian Mint sells digital payments platform to Toronto startup
January 12, 2016
Follow Ivan Semeniuk on Twitter @ivansemeniuk
Report an error Editorial code of conduct
Due to technical reasons, we have temporarily removed commenting from our articles. We hope to have this fixed soon. Thank you for your patience. If you are looking to give feedback on our new site, please send it along to feedback@globeandmail.com. If you want to write a letter to the editor, please forward to letters@globeandmail.com.
Comments