Like many journalists, Carol Guzy has spent much of her career in the background – the person holding the camera, not in front of it. But that changed this weekend, when Ms. Guzy and 10 other celebrated war and conflict photographers from around the world took the stage in Toronto for Shooting War: Covering 50 Years of Conflict to talk about the experiences and challenges of their work.

“We need to have these seminars, have all this kind of stuff open to the public and educate the public about what journalism is and especially photojournalism,” said Ms. Guzy, who has received four Pulitzer Prizes for her work. She said this kind of education is particularly important now as news media face mounting public distrust and journalists have been labelled “enemies of the people.”

“We tend to be on the ground with people interacting for long periods of time. They need to trust us, not be afraid of us,” she said. “I think it would really help everyone if we could just help them understand that we’re just trying to tell their story, and enlighten people about what’s going on in the world. It’s really critical to democracy.”

The event was hosted by The Globe and Mail and grew out of the work of University of Toronto professor Anthony Feinstein, a world expert on the effects of reporting on violence and author of the book Shooting War, which was published last fall.

The book examines 18 images, the context in which they were created and the effects on the people who made them.

Among the journalists who took part in the Toronto event were seminal Vietnam War photographers Tim Page and Joao Silva, who lost both his legs after stepping on a landmine in Afghanistan. After Mr. Silva was injured, he shot several frames of those coming to his aid.

Dr. Feinstein said the event was a way to showcase the photographers’ work while also exposing the human costs of conflict photography to a public audience.

He said the photographers were extremely honest and frank about their experiences, and that audience members were captivated by what they heard. With three generations of conflict photographers taking part, Dr. Feinstein says, the event created a unique record of the challenges and risks of war and conflict photography, and of the events themselves.

“The collective weight of memory is just remarkable, and the collective weight of all these images is at times overwhelming,” he said. “That’s not surprising because they’ve basically chronicled the worst of mankind over the last 50 years. You see it in front of you, and there’s people talking about it, and I think it becomes an unforgettable experience.”

Opinion
Why we need to hear from war photographers
June 5, 2019 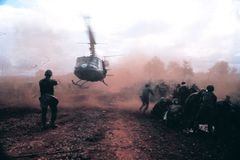 Shooting War brings into sharp focus the violence of conflict – and the impact on the photographers who cover it Subscriber content
December 21, 2018