1 In September, an international team of scientists made headlines by reporting that there could be signs of life in the atmosphere of Venus. What telltale molecule led them to this astonishing conclusion?
a. caffeine
b. phosphine
c. RNA
d. theremin

b. Phosphine is produced by some microbes on Earth. That’s why its detection in the atmosphere of Venus was treated as big news. However, follow-up measurements have clouded the issue. 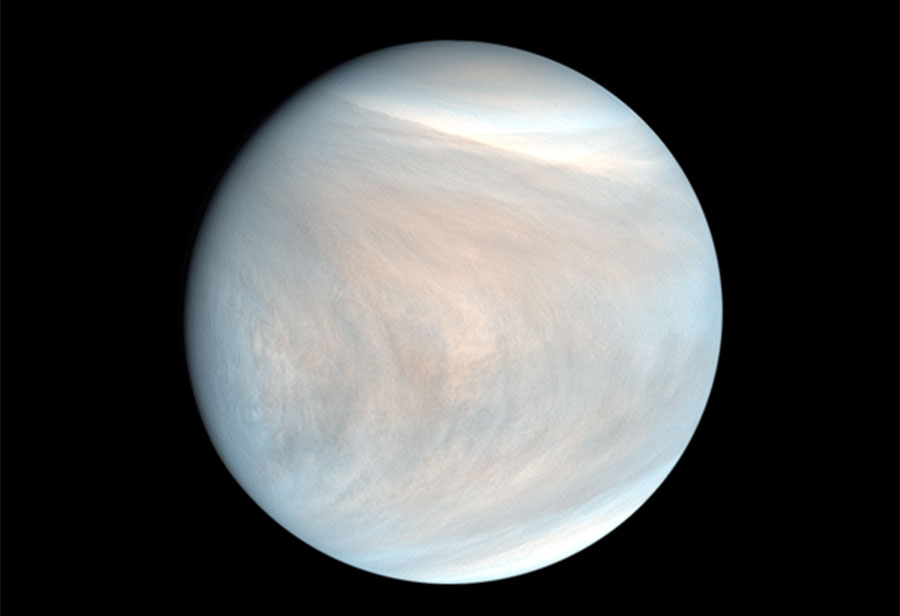 Venus, covered in the clouds where researchers discovered traces of phosphine.

a. The comet maintained physical-distancing guidelines at all times. 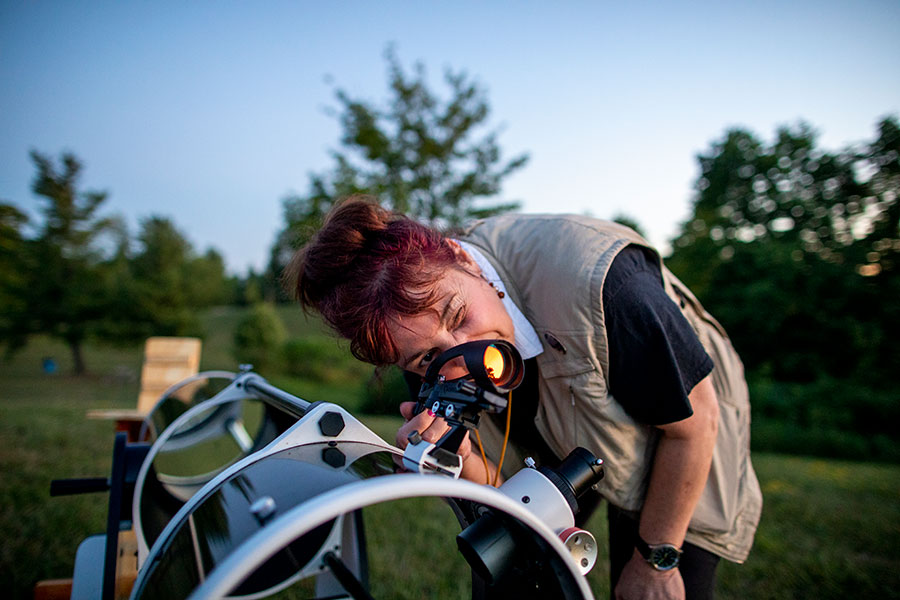 Denise White sets up her Dobsonian telescope as she and members of the Hamilton Amateur Astronomers Club gather on July 13 to watch Comet NEOWISE from the Binbrook Conservation Area.

3 Astronomers were less thrilled when the famous Arecibo telescope, a giant radio dish located in Puerto Rico, collapsed in early December. The Caribbean telescope’s sad demise was anticipated when it was fictitiously blown up in which Bond film?
a. Dr. No
b. GoldenEye
c. Moonraker
d. Thunderball

b. Fortunately for astronomers, the Very Large Telescope facility in Chile, which was blown up in a different Bond film, is still going strong.

4 One of the unexpected breakthroughs of the year was the discovery of a material that behaves as a superconductor – meaning that it carries an electric current with no resistance – at the warmest temperature yet. At what record-breaking temperature did the material perform?
a. -70°C
b. 0°C
c. 15°C
d. 1,500°C

c. A room-temperature superconductor is one of the holy grails of physics, which could transform energy transmission. Unfortunately, as reported in the journal Nature, the new material has to be kept at a pressure close to that at the centre of the Earth. So don’t expect a rebate on your utility bill anytime soon.

b. Alexander Milne was First Naval Lord in 1875-1876, when the British Arctic Expedition led by George Nares was naming features along the northwest coast of Ellesmere Island. 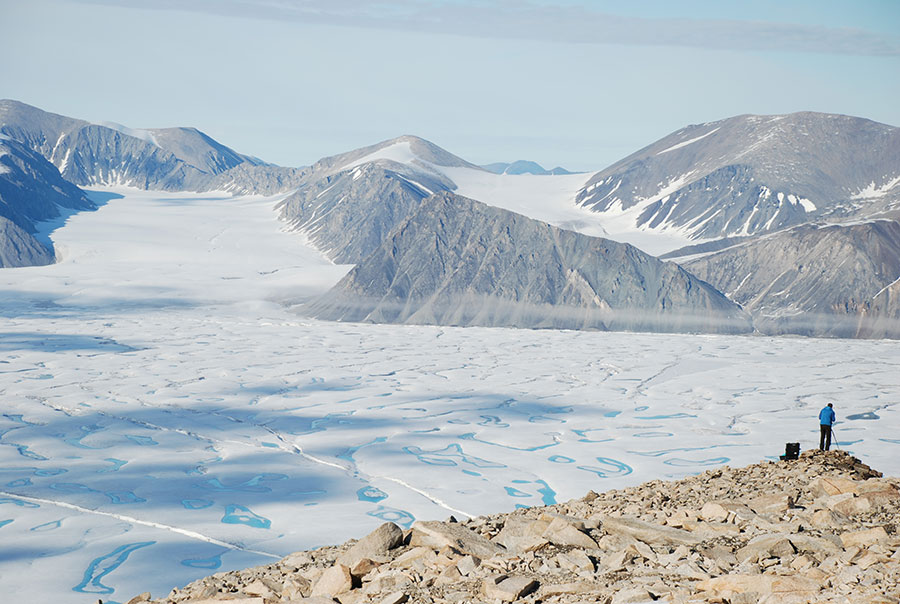 A glaciologist looks out at the Milne Ice Shelf on Ellesmere Island in 2014.

6 The 2020 Atlantic hurricane season was the most active on record, with 30 named storms. Which was the most powerful this year?
a. Hanna
b. Iota
c. Laura
d. Teddy

b. Hurricane Iota, which devastated Central America in mid-November, also reached Category 5 status later in the season than any Atlantic hurricane ever recorded. 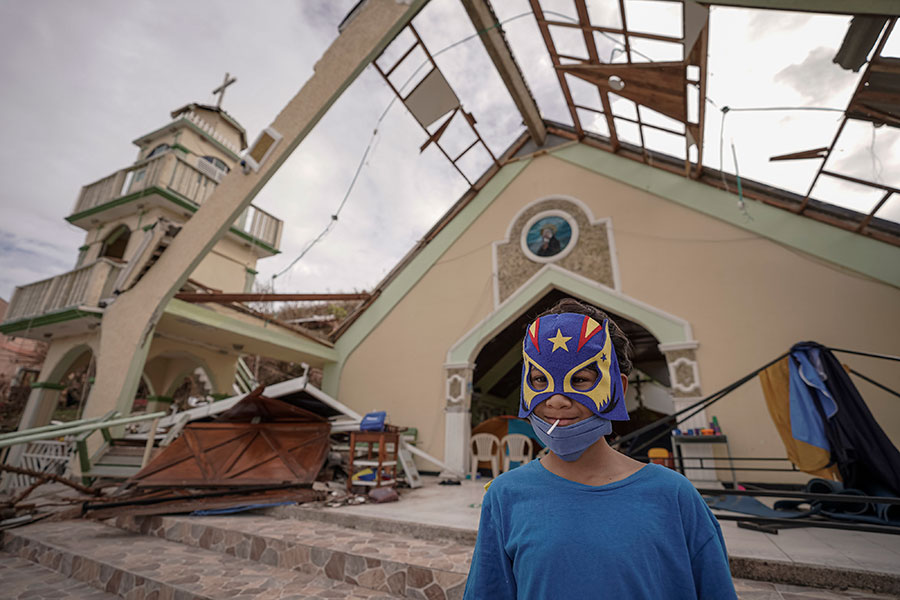 In November, a boy stands by a church used as an improvised shelter on Providencia Island, a Caribbean territory of Colombia, after Hurricane Iota swept through.

7 This year, a Pew report found that plastic is entering the Earth’s oceans at the rate of 11 million metric tonnes per year. How much is that number projected to change by 2040 without international action?
a. about one-third less
b. no change
c. about one-third more
d. about three times more

d. According to the report, the amount works out to 50 kilograms of plastic for every metre of coastline worldwide. 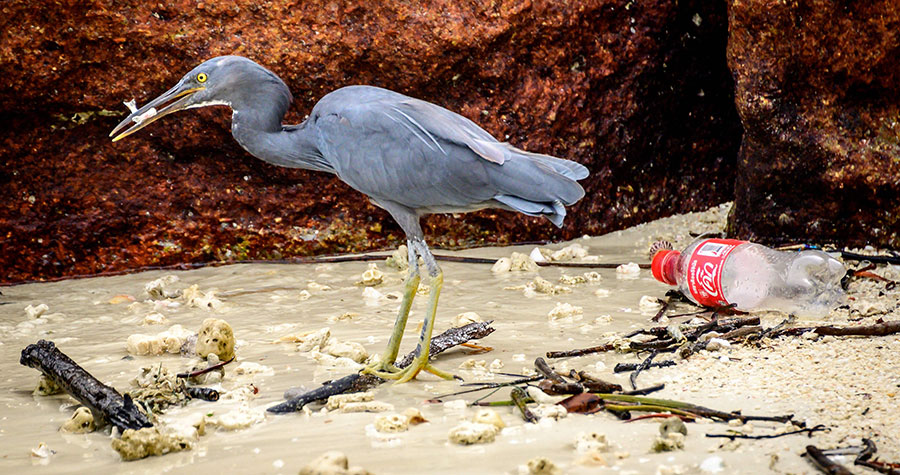 A Pacific reef heron eats a fish amid plastic waste on the beach of Koh Lipe island.

8 What did a team of Canadian researchers notice this year when examining vintage photographs taken of the Rocky Mountains about a century ago?
a. tourists were much better dressed back then
b. avalanches were less frequent
c. better air quality made it easier to see features in the distance
d. trees did not grow as far up the mountain slopes as they do now

d. In some cases, the researchers found that treelines around the Rockies have shifted upward more than 100 metres – a possible sign that a warming global climate may be altering high-elevation vegetation zones. 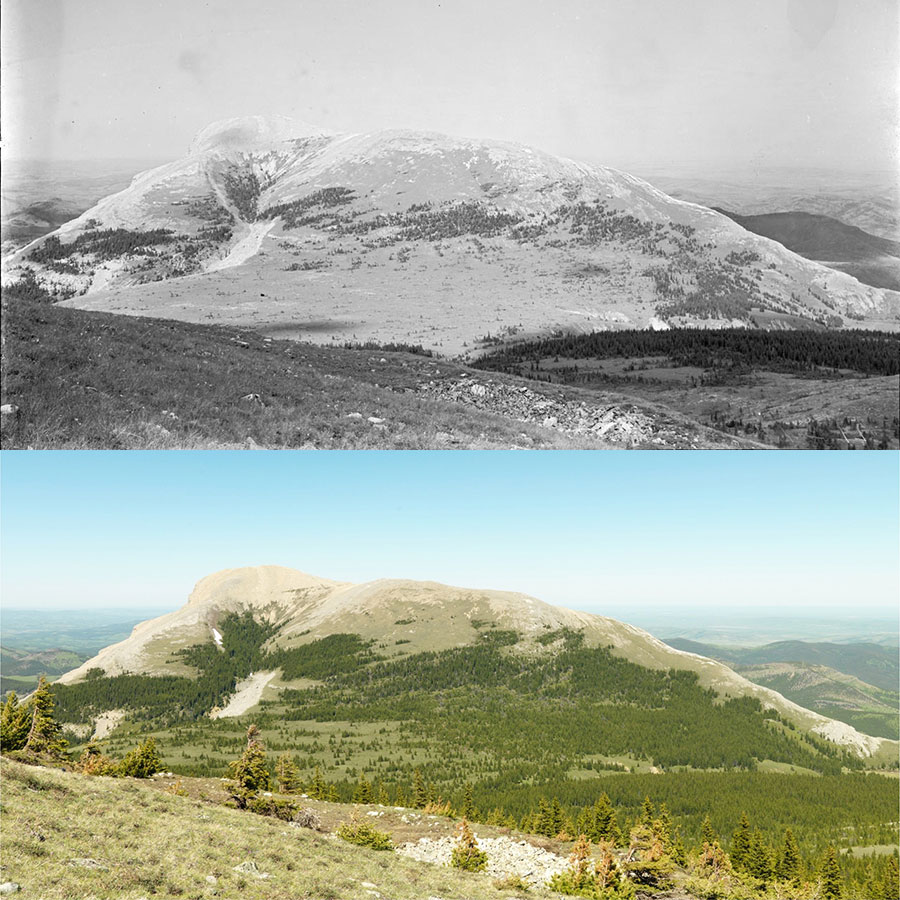 9 Last February, paleontologists in Alberta announced the discovery of a new species of tyrannosaur, dubbed Thanatotheristes degrootorum – the first such find in Canada in 50 years. After what character is the dinosaur named?
a. Big Bird
b. The Grim Reaper
c. Thanos, a Marvel comics supervillain
d. Theremin, a reptilian monster from 1950s era sci-fi

b. The Greek translation of Thanatotheristes is “harvester of death.” The second part of the dinosaur’s name recognizes John and Sandra De Groot, who discovered the 80-million-year-old jawbone of the ravenous creature near Hays, Alta. 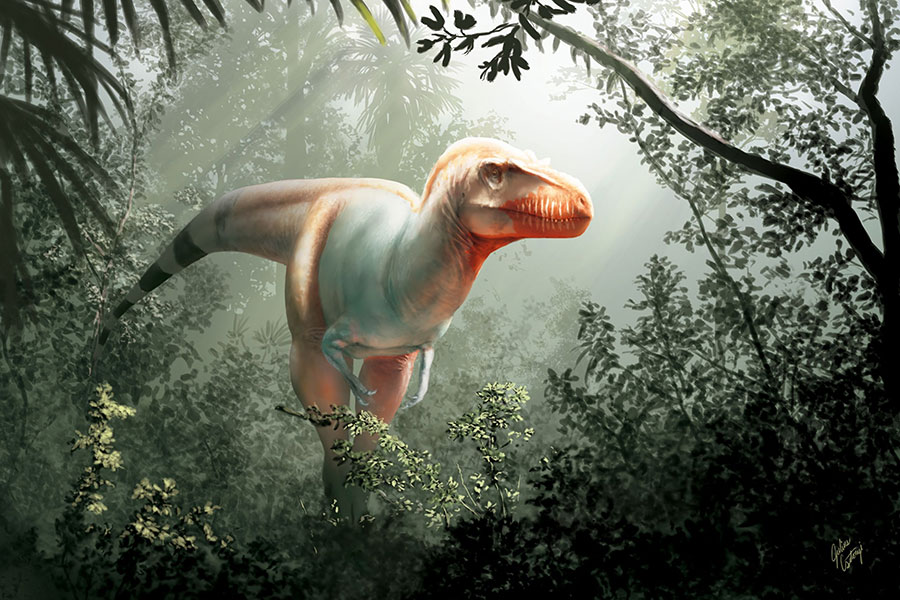 10 What did evolutionary biologists report last February after they examined the skulls of gorillas, chimpanzees and orangutans?
a. all great apes have left-brain/right-brain differences just like humans
b. ape skulls are better built to protect against concussions
c. human evolution was probably jump-started by the loss of a brain region associated with common sense
d. variations in brain size between individual humans are bigger than the average differences between species

a. After taking casts of the skulls, the researchers found that the left-right differences in other great apes appear to be about the same as for humans, pointing to similar differences in function between the hemispheres of the brain. 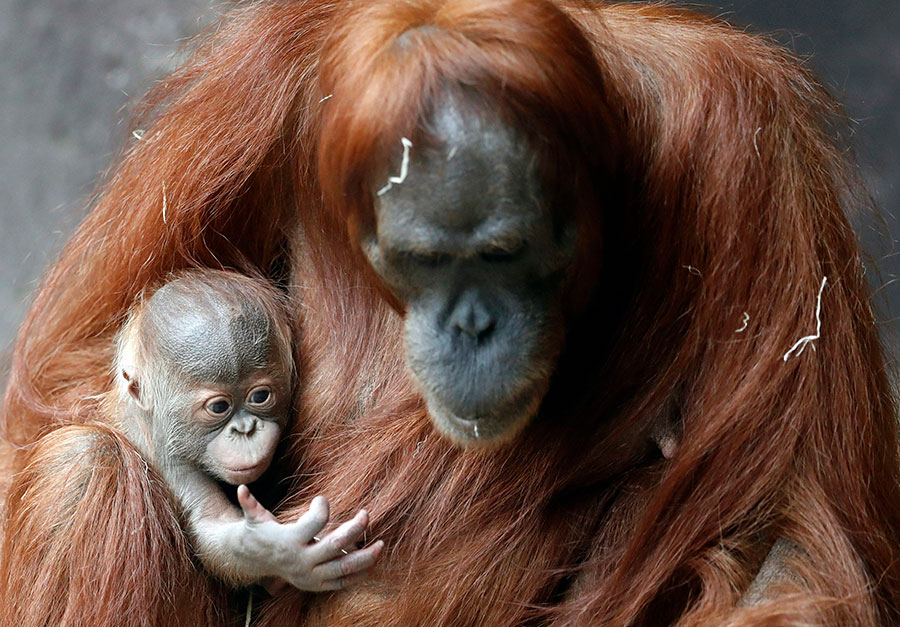 Kawi, a newborn Sumatran orangutan, holds on to mother Mawar at the Prague zoo on Dec. 15.

11 By measuring accumulated layers of poop in freshwater ponds on Grand Columbier Island in the Gulf of St. Lawrence, how far back in time were scientists able to chart the population history of Leach’s storm petrel, the most common nesting bird in the Western Atlantic?
a. about six years
b. about 60 years
c. about 600 years
d. about 6,000 years

d. Yes, that is a lot of bird poop. After they tidied themselves up, the Queen’s University researchers determined that bird numbers plummeted at the beginning of the 19th century once European settlers showed up in the area. 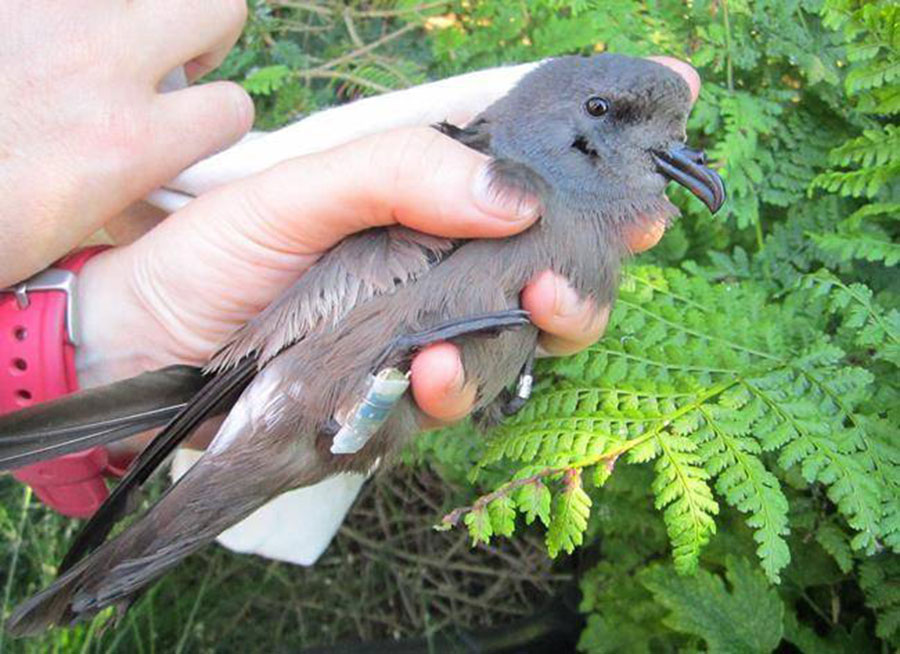 A Leach’s Storm-petrel, shown in 2011 with a tracking device on its leg.

12 What evolutionary first was discovered in some 550-million-year-old worm-like fossils unearthed in the Nevada desert?
a. a digestive tract
b. eyes
c. a nervous system
d. parasites

a. The fossilized guts turned up in X-ray images of the tubular creatures called Cloudina, which are among the oldest animals known. Importantly, their digestive tracts ran in a line with an opening at either end, a system that has been pretty popular ever since.

13 University of Alberta virologist Michael Houghton was one of the winners of this year’s Nobel Prize in Medicine or Physiology. What disease is the prize-winning discovery related to?
a. AIDS
b. Ebola
c. hepatitis C
d. River blindness

c. In the era before whole-genome sequencing, Dr. Houghton and his team painstakingly reconstructed the genome of the hepatitis-C virus and were able to devise a test that allowed screening of donated blood to prevent transmission of the disease. 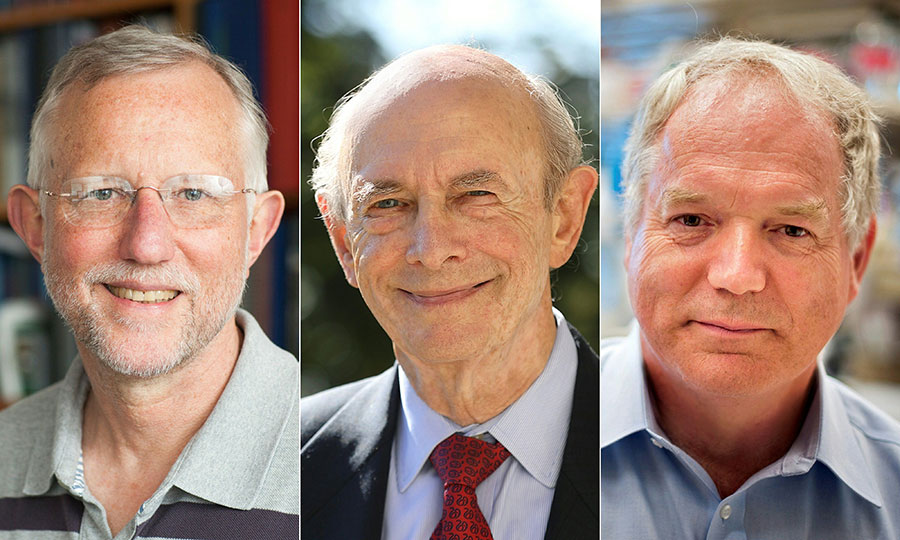 14 Dr. Houghton’s award marks the first time anyone in Canada has won a Nobel for medicine since the discovery of what important substance?
a. heparin
b. insulin
c. penicillin
d. theremin

b. The discovery of insulin by Frederick Banting and Charles Best led to Canada’s first Nobel win in 1923. 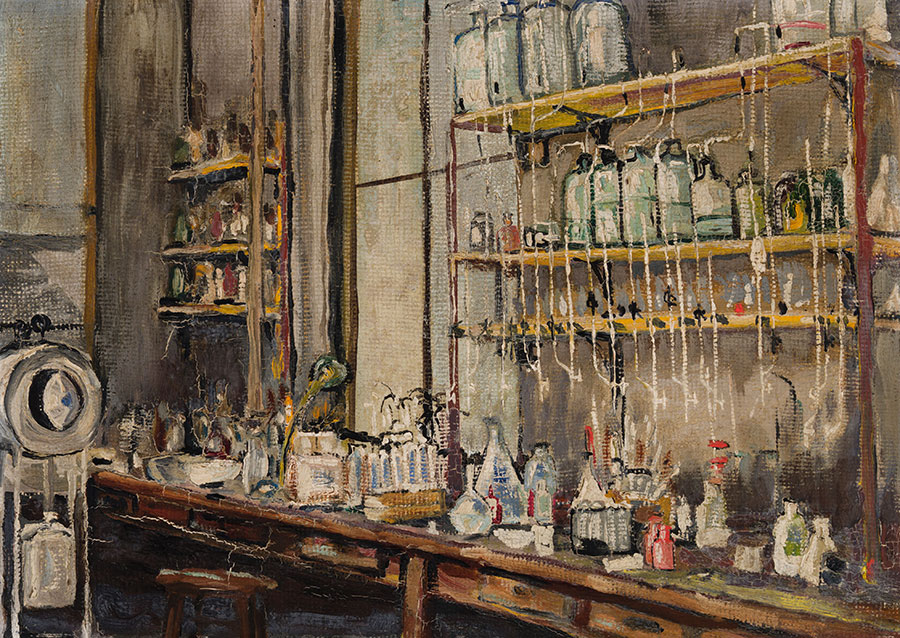 The Lab (1925) is a painting by Frederick Banting of the laboratory where he and Charles Best discovered insulin.

15 According to a study published in May, what do European women who carry a gene variant inherited from Neanderthals have more of?
a. appetite
b. freckles
c. siblings
d. testosterone

c. The gene variant is linked to the hormone progesterone, which is important in pregnancy. Women who carry the variant tend to have fewer miscarriages, which likely explains why they also also tend to have more siblings than those who do not carry the Neanderthal gene. 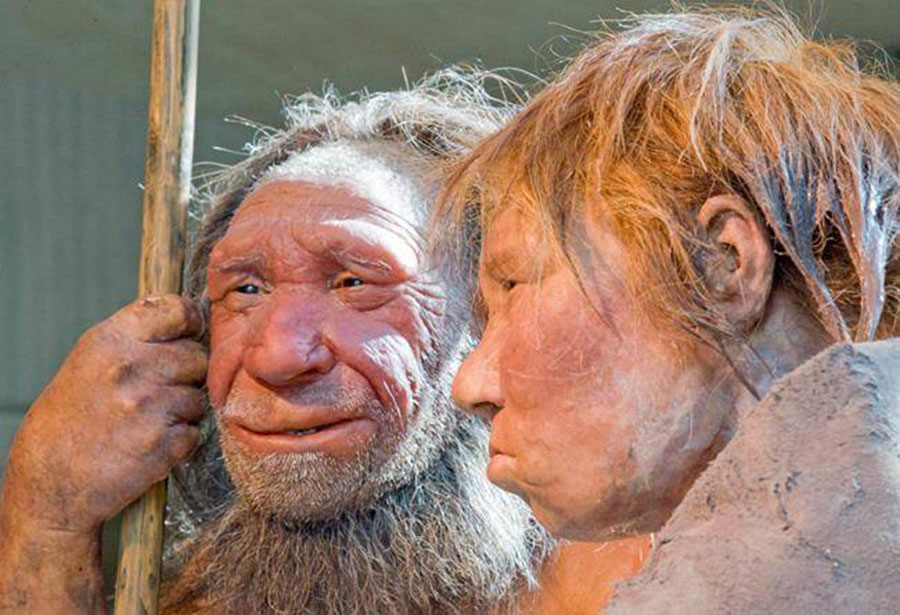 Models of a Neanderthal man and woman are on display at a museum in Mettmann, Germany, in 2009.

16 In an unrelated genetic study of olfaction published in October, what distinctive odour are some Icelanders unable to detect?
a. fish
b. lemons
c. mint
d. seabird poop

a. Researchers who conducted the study said they envied those with the gene variant. 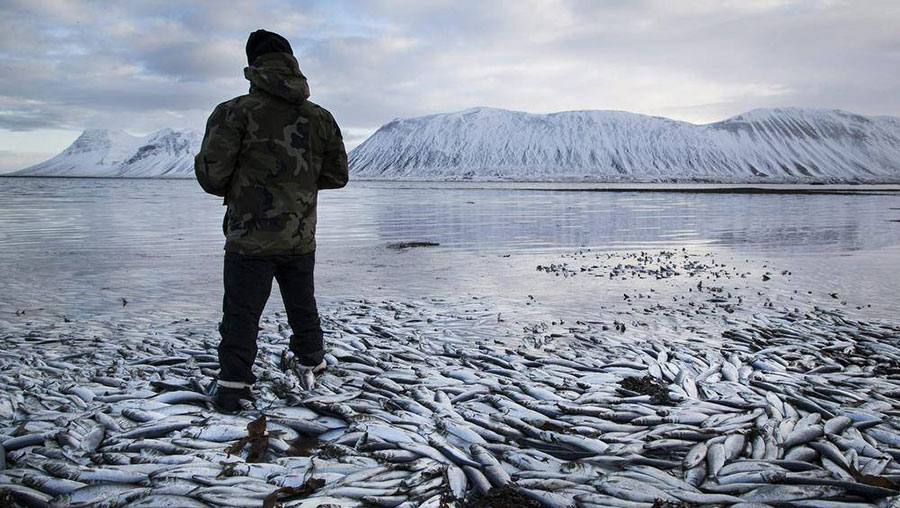 17 Based on research published last March, what commodity did Stone Age people in Lesotho, in southern Africa, travel at least 350 kilometres to gather and exchange in an example of social networking?
a. elephant ivory
b. ostrich egg shells
c. rhinoceros testicles
d. red ochre

b. The eggshells were used to make bead necklaces which could be exchanged to strengthen social bonds some 33,000 years ago. Based on strontium isotopes in the eggshells, a team of Canadian and U.S. researchers was able to trace how far away the material originated from the places where the hunter-gatherers lived. 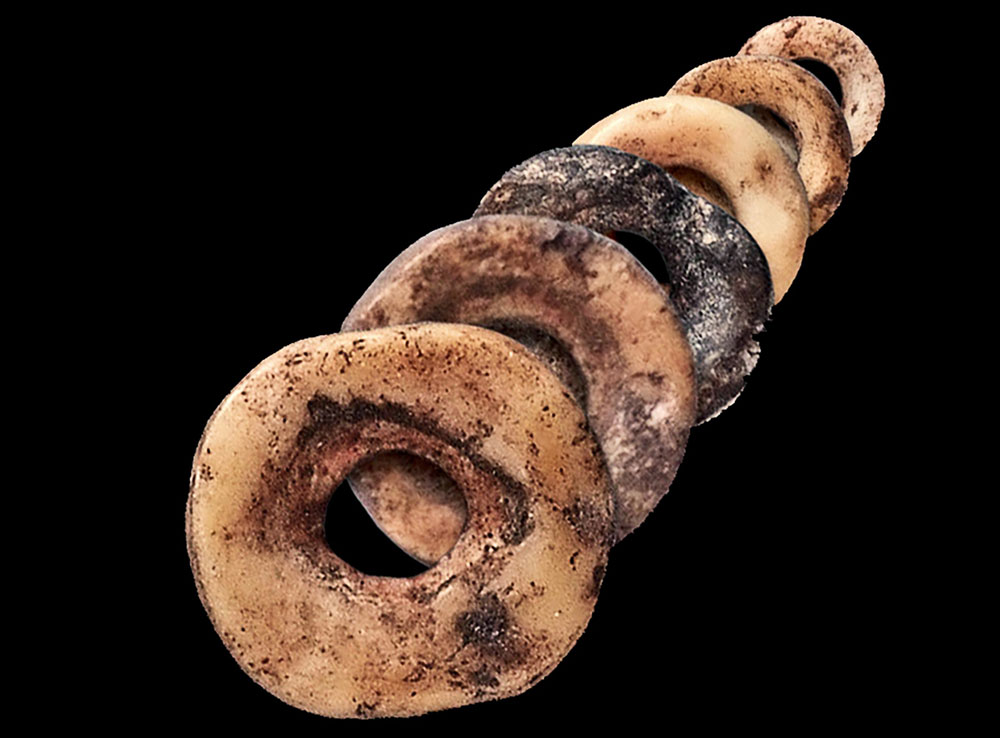 Researchers studied how these ostrich-egg beads were exchanged across southern Africa tens of thousands of years ago.

18 What is the preoccupation of AlphaFold, a computer algorithm that rocked the artificial intelligence world in 2020?
a. laundry
b. origami
c. poker
d. protein

d. AlphaFold can deduce the three-dimensional structure of a protein based on its amino-acid sequence, a notoriously complex problem in molecular biology. The achievement may usher in the era of AI-guided drug discovery and other applications that depend on knowing the precise shapes of biological molecules.

19 What notable achievement did Dalhousie University alum Kathryn Sullivan notch this year?
a. set a new record for the longest-duration spaceflight by a woman
b. became the first woman to reach the ocean’s deepest point
c. became the first woman to scale the highest peak on every continent
d. climbed the equivalent distance from Earth to the moon on a StairMaster during lockdown

b. On June 7, Dr. Sullivan, who earned her PhD in geology at Dalhousie University in Halifax, descended to Challenger Deep, a spot in the Pacific Ocean that is just over 11 kilometres below sea level. Dr. Sullivan is also the first American woman to walk in space, but the current record for the longest-duration spaceflight by a woman was set this year by Christina Koch aboard the International Space Station. The first woman to scale the highest mountain on every continent was Japanese mountaineer Junko Tabei in 1992. As far as we know, the StairMaster moonshot is still up for grabs.

20 What technological contribution to music celebrated its 100th anniversary this year?
a. the electric guitar
b. the kazoo
c. the Moog synthesizer
d. theremin

Answer all of the questions to see your result
You sure know a lot about science, which is an achievement after the year we’ve had. Keep it up and have a safe 2021.
Good effort, but you missed some. Totally understandable; it’s been a tough year for all of us. Want to try again?
That’s a low score, but don’t be too hard on yourself: Some of the world’s most powerful people were surprisingly bad at science this year. You can practice and try again!