The sea that thrashes at the rocks along Nova Scotia’s South Shore has claimed hundreds of ships since record keeping began here. On a recent Monday morning, it took one more – Anne Drew’s little green skiff.

By the time the fog was burning off, her husband, Thom Drew, had launched a search-and-rescue mission, tearing over the waves in his motorboat and squinting toward the blue horizon, looking for some sign of the boat that slipped its moorings and floated away in the night.

“I’m going to be in real trouble if I can’t find that one,” he shouted over the roar of the outboard motor. “That was my wife’s favourite boat.”

After nearly 40 years of living on Mosher Island, Mr. Drew, 72, has learned to accept that sometimes, boats just disappear. The sea pulls at their ropes until they finally give. Other times, violent storms smash them to pieces against the shore. The Drews figure they have lost about six boats one way or another since they came here in the 1980s.

It’s a small price to pay for the home they have created for themselves as the only year-round residents of Mosher Island, a three-kilometre-long patch of rock and spruce trees that they share with two dogs, eight goats, a dozen chickens, two cats and a few ducks. Accessible only by boat, it’s only about a half-an-hour ride from the mainland, but a world away from the lifestyle of convenience that most people are used to.

From 1981 until 1990, Mr. Drew was the assistant lighthouse keeper at Mosher Island, which has had a lighthouse in continuous operation since 1868.

When the Canadian Coast Guard automated the light, forcing him out of the job along with hundreds of other Nova Scotia lighthouse keepers, he and his wife stayed. The island had everything they wanted, and they saw no reason to leave. “There was never any debate,” Mr. Drew said.

The Drews, who had already bought land near the lighthouse, vacated their government-owned home and moved into their goat barn. They turned a meadow thick with wild roses into a productive little farm, hemmed by apple trees and a garden that bursts with vegetables and herbs.

About 10 years ago, they built a new home, framed by wood harvested from the island, where they can watch whales pass by their kitchen window.

“We loved it here. Leaving was never part of the discussion,” said Ms. Drew. “We always pined for this place. I’ve always felt like I’m in exile whenever I’m not here.”

The Drews say they were just “city kids” when they moved to Mosher Island and had to learn the hard way how to adjust to island life. But Mr. Drew, a former mechanic for the American military raised in Massachusetts, was handy and knew carpentry. Ms. Drew, a Dartmouth-raised veterinarian, understood animals and how to run a subsistence farm.

“It’s hard work, but it doesn’t feel like it. It feels like a good way of life,” he said.

The work never ends, and power outages are common. When Hurricane Dorian tore through here last fall, they lost power for eight days. When their dishwasher breaks, they have to ferry over an appliance repairman and pay him travel costs to fix it.

The winters are long and quiet, but they’ve filled their shelves with books and records and preserves that help them get through. The Drews learned to adapt, in a place where a trip to the grocery store in December means an open ride across the sea, dealing with salt spray that stings your face and freezes on contact. “I was always frozen in the boat in winter,” said Ms. Drew, who now wears a survival suit for that crossing.

The payoff is a lifetime of peace and solitude. At night, the only sound you can hear are the waves washing over the shore. Sometimes, the sea gives back other gifts, too – like Ms. Drew’s little green boat, which was found in a hidden harbour, swamped, five days after it disappeared.

It’s also a pretty good place to ride out a pandemic. When Ms. Drew returned to Nova Scotia in March after doing some veterinary work in Labrador, at the start of the COVID-19 crisis, she was advised to follow physical-distancing requirements. “They said you’ll have to self-isolate for two weeks. I said, ‘I think I can manage that.‘”

Mr. Drew’s primary job as assistant lighthouse keeper was to maintain the buildings, run the big diesel generators and keep a logbook of ship traffic. But what he remembers most is the life outside of work, and all the things that have been lost .

Gone is the picket fence, the garden that overlooked the harbour, and the sea-hardened main lighthouse keeper who did not know what to make of the long-haired, hippie couple he was forced to share an island with.

The old pepperpot-style lighthouse was pulled down by the Coast Guard and burned in 1990, replaced with a round, fiberglass light tower that runs 24 hours a day. The sturdy lighthouse keepers’ homes, insulated with eelgrass, have been abandoned to the elements and bleached by the sun. The fog horn that once warned ships they were approaching the rocks has been silent for years.

Most vessels no longer need the lighthouse, but there are smaller boats that don’t have GPS and modern navigational aides. And Mr. Drew, who has rescued plenty of them, knows that out here, people are still supposed to look out for each other.

“That new light, it can’t go out and rescue anybody,” Mr. Drew said. “Island people know if you get a call for help, you just go. You don’t question it. We learn to rely on each other.” 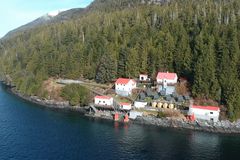 Opinion
As a lighthouse keeper, I have chosen isolation. Here’s what I’ve learned about solitude
April 24, 2020 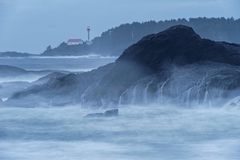