So this fall the Nanaimo, B.C., couple made a heavy decision: The two signed up on #NoFutureNoChildren, an online initiative that’s seeing thousands of young people pledge not to have children unless governments take action on climate change.

“I can’t consciously bring a child into the world knowing that their future is so unsure,” said Ms. Boudreau, 26. “It’s hard because I have strong maternal instincts.”

After student climate rallies swelled worldwide last month and environmentalists blocked bridges in cities across Canada as part of “Extinction Rebellion” protests this week, a quieter movement is now playing out between couples and families at home about whether or not to have children.

For many pledge takers who spoke to The Globe and Mail, the idea of bringing a child into a world facing melting polar ice caps, flooding, drought and forced mass migration seems unfathomable. For them, this is not about population control or the carbon footprint of individual babies, but an attempt to make governments listen and move on climate change. While these young adults are certainly not the first to choose lives without children, this may be the first generation doing it out of a sense of civic duty.

Emma Lim, an 18-year-old student and activist from London, Ont., launched #NoFutureNoChildren in mid-September as an “expression of fear and a plea for action.” Visitors to the website are greeted by a full-screen image of a roaring forest fire. A ticker counts the number of pledge takers – now inching past 5,000, many of them 15 to 26 years old.

Their testimonials are bleak: “Having children is an act of hope for the future. I have no hope,” writes one from Texas.

“We are people who desperately want children but will not bring a child into an uncertain future,” said Ms. Lim, who is studying biomedical science at McGill University. “This pledge is our small way of asking for our safety and for the safety of our children.”

Ms. Boudreau and Mr. Menard, 30, both campaign co-ordinators for the Green Party of Canada, have struggled to raise their drastic choice with their families. They realize that, for some people, what they’re doing looks like an extreme stunt. For them, it was a painful decision.

“There’s a lot of thought that goes into something like this, especially for people who really did want to have children,” she said. “People are not taking this lightly. It’s not hysterics.”

The Canadian #NoFutureNoChildren pledge follows similar grassroots initiatives worldwide. In the United Kingdom, there is BirthStrike; in the United States, the organization Conceivable Future has people with and without children discussing their fears as parents amid climate disruption.

Many of the pledge takers describe the fear as paralyzing. "We’re seeing a certain amount of depletion amongst people who are actively involved in advocacy work around this and feeling some helplessness,” said Sarah Levitt, a final-year psychiatry resident at the University of Toronto who co-founded the Canadian Climate Psychiatry Alliance to help mental-health professionals better understand climate anxiety (or eco-anxiety), an emerging area of research.

Whitehorse’s Joshua Kearney, 18, said he had always dreamed of raising three kids in Yukon. Deeply concerned about food security and melting permafrost – in the region, many structures are built atop it – he said he has recalibrated his plans.

“I, like many others, am terrified,” said Mr. Kearney, who is studying general science at the University of Alberta. “We need a long-term fix for me to feel comfortable with building my own family.”

Toronto’s Alienor Rougeot, 20, is also worried about food security, plus the potential surge of diseases, including the northward spread of tick-borne Lyme disease, linked to climate change.

“Given the weight that I feel on my shoulders all the time and given the fact that I’ve grown up with this idea that I was born under the threat of the climate crisis, I wouldn’t want someone else to have to deal with that,” said Ms. Rougeot, who is studying economics and public policy at the University of Toronto.

Climate anxiety can encompass stress, depression and guilt over the future of the planet, said Lise Van Susteren, a Washington-based psychiatrist who co-founded the Climate Psychiatry Alliance. “Kids are hearing about climate and collapse," Dr. Van Susteren said. "How could they not be anxious?”

Reading through the online testimonials at #NoFutureNoChildren, Elizabeth Haase saw young people being gaslighted for raising grave environmental concerns. Dr. Haase, a Carson City, Nev., psychiatrist, likened their situation to that of Cassandra, the Trojan princess of Greek mythology who could foretell the future, but could neither change it nor convince others with her warnings.

“These kids are coming up against bringing the bad news to their parents and their parents just not getting it,” said Dr. Haase, who is producing the documentary Frogs in a Pot, about the psychological effects of climate change on young people.

Dr. Haase said some parents view no-children pledges as a personal affront. “It’s a huge narcissistic injury to have your kids choose not to propagate your genes,” she said. “It’s a tremendous disappointment to your sense of future and [the hope] that you might be a grandparent some day."

Ms. Boudreau said she has had a hard time opening up to her family about the decision. Many women face fierce pushback when they opt out of having kids, but doing so because of climate change is even harder for outsiders to digest, she said.

Her partner said he’s grown worried and judgmental at his family gatherings, where relatives bring babies or speak of their plans to have children. On his own no-baby stance, Mr. Menard bites his tongue: “Nobody likes a downer.”

Ms. Rougeot has encountered suggestions that hers is an empty pledge. She has no long-term partner and, as an undergrad, has no imminent plans to have children – climate crisis or not. But “we’re not going to monitor and track in 10 years every person that took the pledge and then say, ‘She had a child. Liar,'" she said. “Isn’t it bad enough that young people have these thoughts? … This should be alarming.”

While Dr. Haase views the pledges as “self-affirming and powerful," she also worries about young people’s hopelessness.

Dr. Van Susteren urges parents of teens experiencing climate anxiety not to minimize their concerns and instead point out what the family is already doing locally to help the environment, as well as suggest their children seek out a like-minded community.

For young people who always imagined they would have children but are now thinking twice, Dr. Van Susteren understands it’s a personal decision, but hopes some will reconsider. After all, who will make up the next generation of protesters agitating for change if not the children of today’s young climate warriors?

“I would encourage them to recognize that we need good people to continue this battle," she said. "I fully expect that any child of theirs would be such a person.” 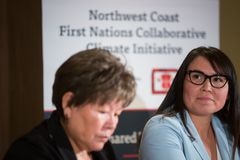 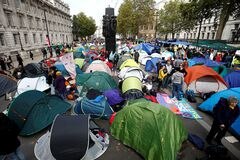