The last thing Phil Hunt did the night before the fair was to tuck in his pumpkin.

This was no ordinary-sized gourd. Mr. Hunt and his wife, Jane, competitive vegetable growers, raise pumpkins the size of small Volkswagens in their backyard. A king-sized bedsheet would not do. Instead, they used a 10-foot tablecloth. Layered on top were comforters – protection from the cold.

The next morning, the Hunts travelled two-hours from their tiny village of Cameron, Ont., to the Woodbridge Fall Fair, with the pumpkin behind them on a trailer. They took even more care than usual. This year, they had on their hands what they have been working toward for decades: A possible 2,000-pounder.

The tablecloth trick is one of many the Hunts have learned from their online community of “X-treme” vegetable growers. Because as much as they rely on good tools and healthy soil and sun, what the Hunts rely on most is the internet.

Twenty five years ago, the couple saw in the news a story about a record-setting pumpkin. Mr. Hunt turned to his wife. “We’re never going to set a world record in sports,” he said. “But we might be able to do that.”

Since then, they have set world records for heaviest tomato, at 7.33 pounds, and in 2014, for largest rutabaga, at 96 pounds. (Giant vegetables are weighed in pounds, not metric.)

But the prestige is in the pumpkins.

So in 2009, when the Hunts set a new Canadian record (1,678 pounds) in front of a crowd of thousands at the Port Elgin fair, Mr. Hunt did a little dance.

The appeal, he said, is in beating their own personal bests – hence the “1,678” embroidered on his leather jacket. (The jackets are bestowed only to master growers – “Just like they do in golf,” he says.)

That, he said, plus the fascination of watching the thing grow – as much as 50 pounds a day. One day, it is the size of a fingernail. A few days later, a few feet wide.

The past decade has been a golden age for giant-vegetable growing. Since the Hunts started, the world record for pumpkins has soared from about 800 pounds to 2,600.

What’s changed? Genetics, partly. And, as the Hunts explained, the internet.

Around the world, online communities have sprouted up devoted to the hobby. Canada has one of the most fervent groups of giant-vegetable growers, about 200 of them. Many of them log in several times a day to compare notes and recipes for compost “tea” fertilizer (maple syrup and kelp are common ingredients). They post soil-sample results to compare and critique. They exchange the latest soil-science research.

In Canada, the community spans from coast to coast, and ranges in age from teenagers to retirees such as the Hunts. They have become a tight-knit group, and frequently travel together to weigh-offs. Last year, a big group of them took a cruise together to the Caribbean.

The fervour is partly explained by the fact that their passion is a Canadian invention. A Nova Scotian, Howard Dill, patented the first Atlantic Giant pumpkin seed in 1986.

Despite this, weights in the United States and Europe have long passed 2,000 pounds. In Canada, where regulations prohibit some of the chemicals used elsewhere, they have yet to hit this mark. Getting there has become a point of national pride.

Which takes us to the Hunts in Woodbridge.

Deep in the fairground, past the booths selling caramel corn and mini doughnuts, about a dozen pumpkins lay displayed across a field in varying shades of orange, white and green.

Unlike the perfectly round pumpkins at grocery stores, Atlantic Giants do not yield to rules of symmetry. They ooze and bulge into lumps with an otherworldly look. The colour of Mr. Hunt’s entry could best be compared to overcooked salmon.

Standing next to his pumpkin awaiting the official weigh-in, Mr. Hunt tapped his cane nervously.

“How do you get them so big?” a man wandered over to ask. Jeff Levy, a friend of Mr. Hunt’s, leaned toward the man with a conspiratorial grin. “You know those bicycle pumps?”

As he waited, Mr. Hunt explained his anxiety. As tempting as it is to think growers want to play God – that their experiments are an attempt to outwit mother nature – Mr. Hunt said it is the opposite. Growers are at the mercy of nature. All it takes is a single storm or cold spell. Or one rain too many.

Sometimes, it happens long before a weigh-off. Just ask Russ Landry, a grower who had a squash in 2007 that had “world record” written all over it. On Sept. 9, it burst from overwatering. He cried.

And in the end, growers don’t know until their pumpkin is weighed what the numbers will say.

Finally, it was time. Mr. and Mrs. Hunt held their breath. A tractor lifted the pumpkin onto the scale. 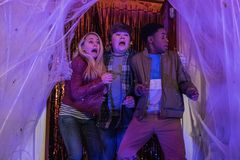