When Kenneth Deer looks at train tracks, he sees something more than rails and ties, more than a suburban commute or the long haul of freight.

For the Mohawk leader, this simple piece of infrastructure stands for many things in his mind that don’t normally occur to Canadians when they board a train or hear one whistling by: theft of land, starvation, forced relocation.

He is the spokesperson for the blockade of the Canadian Pacific tracks on Kahnawake territory, near Montreal, part of the series of protests that have interrupted rail traffic across the country since the first week of February. The historical resonance of the blockades is “very clear” to Mr. Deer and his fellow protesters. “The railways got very wealthy on our land. … The railways had more right to the land than we did.”

The blockades have been a response to RCMP arrests on Wet’suwet’en territory in northern B.C., where protesters have been trying to stop the Coastal GasLink pipeline. But for many Indigenous demonstrators from Tyendinaga to Gitxsan territory, the rails have taken on a symbolic as well as tactical meaning, and their occupation has been cheered as a strike against one of the most effective tools in the colonization of Canada.

On Tuesday morning, the Kahnawake blockade remained in place, despite a tentative deal between Wet’suwet’en Nation hereditary chiefs and the federal and provincial governments. Another Mohawk blockade near Belleville, Ont., that had stopped train traffic between Toronto and Montreal was dismantled by Ontario Provincial Police last week.

While rail interruptions have roiled Canada’s economy for nearly a month, the link between railways and the removal of Indigenous land is at the root of Canada’s national story. Construction of the CP railway was seen as essential to the growth and defence of the country in the years after Confederation – but First Nations sometimes stood in the way. Roughly 5,000 Indigenous people were expelled from the Cypress Hills of Saskatchewan in the 1880s alone to make way for the CPR. One tactic used by local Indian agents against recalcitrant bands was to withhold rations.

Even after tracks were laid on the freshly vacated land, trains continued to spread ruin in Indigenous communities on the Prairies. The Cree chief Poundmaker predicted that when the railway arrived “the whites will fill our country and they will dictate to us as they please.” It was worse than that. As James Daschuk illustrates in his study of this period, Clearing The Plains, trains brought settlers, and settlers brought the measles and influenza that ravaged First Nations people in the last decades of the 19th century. “For many on reserves,” Mr. Daschuk writes, “the railway proved to be a fatal disease vector.”

Today, the University of Regina associate professor of kinesiology and health studies sees a rich irony in the fact that First Nations people are blockading tracks laid by the company that once caused them so much suffering. “The subjugation of the Indigenous people was integral to the completion of the railway,” he said. “So it’s interesting that Indigenous people are now using the railways to empower themselves and raise awareness of Indigenous issues around the country.”

Demonstrators at protest sites across the country have been vividly aware of this irony. (Mr. Deer even cited Mr. Daschuk’s book.) At the blockade near Belleville, now dismantled, protesters mostly refused to give their names for fear of government surveillance, but often spoke about the emotional significance of blocking a form of infrastructure that has cut a deadly swath through Indigenous lands in Canada.

Many passive supporters of the blockades have also been cheering them on, in part, because of what the railway represents in Indigenous history, said the Kwakwaka’wakw artist and activist Gord Hill, author of the book 500 Years of Indigenous Resistance. “I can see it all over social media, there’s always references to the trains, and how they were imposed,” he said. “I think for Indigenous peoples in general, it is very satisfying to see this engine of colonization shut down.”

Conflict between First Nations communities and the big railway companies is not a figment of Canada’s distant past. As recently as 2016, Fort William First Nation, next to Thunder Bay, settled a land claim related to its relocation from good riverfront land more than a century earlier for the sake of building a Grand Trunk Pacific railway terminus – a displacement that shunted the band to less arable soil and forced the relocation of a community graveyard. (Both Canadian National Railway, Grand Trunk’s corporate successor, and CPR declined to comment for this story.)

It is an interesting twist of fate, Mr. Hill said, that Indigenous protesters now have such easy access to train tracks, because of land expropriations that skirted or bisected their territory in this way. “The reason these railways are so vulnerable to this type of action is because they were punched through reserves,” he said.

The presence of rail lines in traditional Indigenous territory can still mark life in surprisingly intimate ways, notes the Gwich’in lawyer Kris Statnyk, who practises at the Vancouver firm of Mandell Pinder. When several Gitxsan hereditary chiefs were arrested at a rail blockade in northern B.C. last week, he thought about his family’s connection to the CN tracks that cut through the community.

His wife’s late grandmother was a little girl spending time in her hereditary fishing grounds when the company began dynamiting its right-of-way nearby, according to a story passed down in that family. In the 1910s, when the Grand Trunk railway was built in that area, it passed through a Gitxsan cemetery and disturbed more than a dozen buried bodies, according to a University of British Columbia doctoral thesis written by M. Jane Smith in 2004.

Last year, Mr. Statnyk got married in Gitxsan territory. It was a beautiful, traditional ceremony, he said – interrupted only by the passing of a train.

“Everyone was just silent and still,” he recalled. “It was a moment of reflection … [About] everything in our lives and our history that had allowed us to be there … in spite of everything we’ve had to endure.”

Overview: Where February’s blockades were 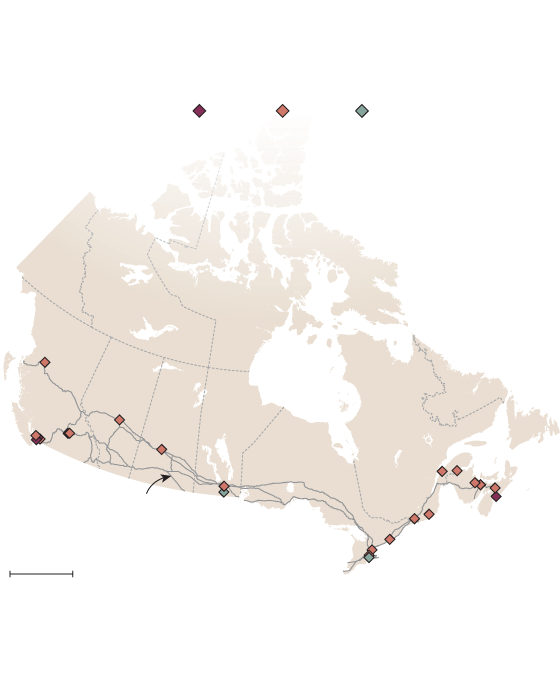 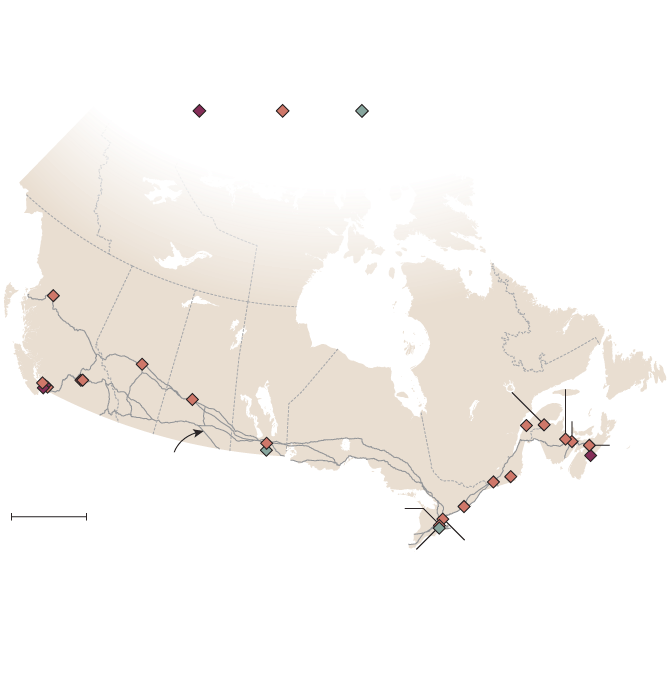 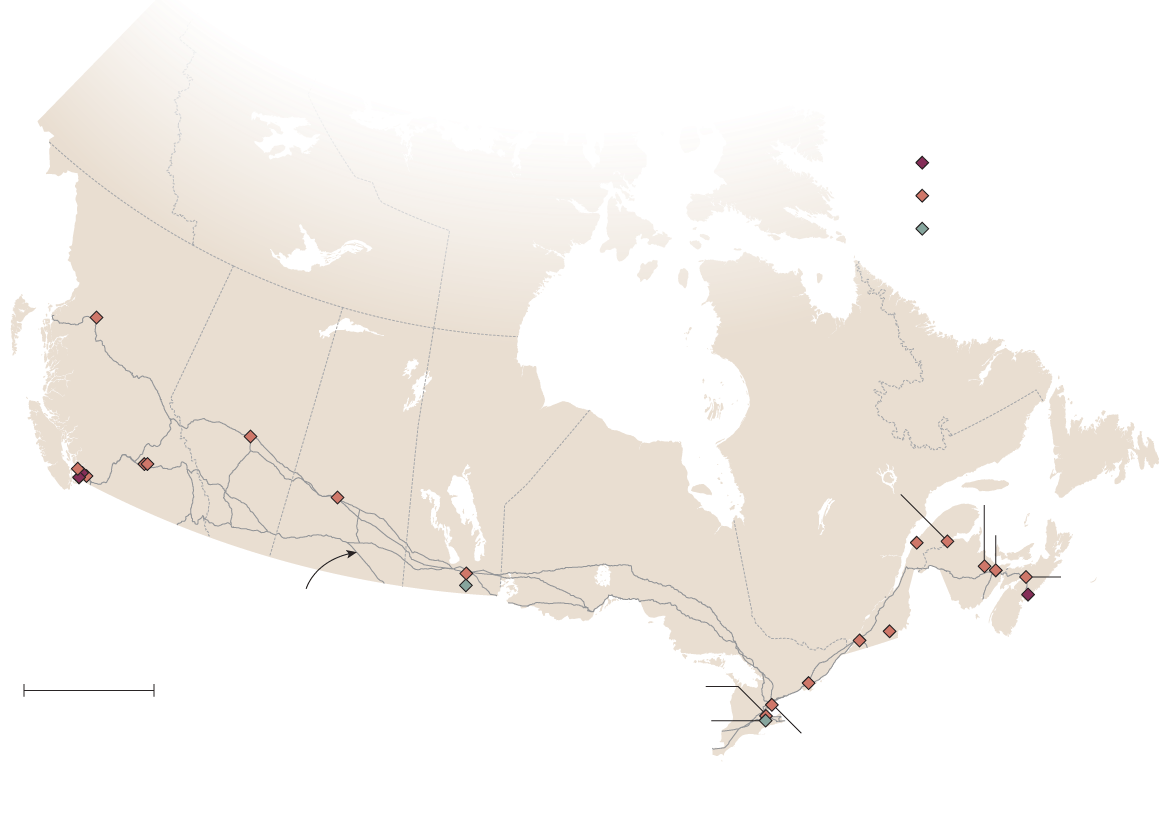