Marcus Gee
Published May 15, 2021 Updated May 15, 2021
Comments
Text Size
Please log in to listen to this story. Also available in French and Mandarin. Log In Create Free Account

Never has the old saw “it’s always darkest before the dawn” seemed more apt than in the past few weeks. Fully a year after the pandemic started sweeping the world, a devastating third wave rolled across Canada. New variants of COVID-19 washed in. Intensive-care units filled up. Younger people showed up at hospitals in rising numbers. Exhausted doctors worried anew that they would soon have to decide who would get lifesaving care and who would not. Health authorities tightened lockdowns.

And yet the first rays of the rising sun are clearly visible. The long-promised flood of vaccines is arriving. Another 4.5 million doses are landing in the coming week alone. After months of lagging many other countries, this country has moved way up the charts, both in terms of share of its population vaccinated and pace of vaccination. One reason that some provinces have called a pause on administering the AstraZeneca vaccine over a statistically tiny health risk is that they now have so many doses of the other vaccines that they can pick and choose.

Despite the AZ scare, vaccine hesitancy is falling as more and more people get jabbed. The crowd effect – “If they’re getting vaccinated, I guess I can” – is taking hold. Canadians are rushing out to get their shots at pharmacies, hospitals, mass clinics and pop-up locations, then posting joyful vaccine selfies.

In Toronto, where more than half of adult residents have had their first shot, over 300,000 more people became eligible for vaccination on Thursday when those aged 40 to 49 were cleared to get theirs. Many thousands that age and younger have already managed to find a shot through pop-ups and special exemptions for those in COVID-19 hot spots. An ambitious effort to vaccinate people in those areas is paying off. Thanks to mobile vaccine clinics, door-to-door vaccination units and other creative efforts, many of the city’s more vulnerable residents are getting their shots.

The vaccination drive and the continuing lockdowns are starting to have the intended effect. The number of patients in intensive care has started to fall from its third-wave peak. So has the number of new COVID-19 cases. In Ontario, the seven-day average is its lowest in more than a month. The rate of positive tests is the lowest in nearly six weeks. In Montreal, which managed largely to avoid the third wave, the number of new daily cases has fallen to 200 – a sixth of the figure at the start of the year.

If the vaccination campaign continues to succeed, Canada should reach the plateau that makes it possible to start easing health rules – 75 per cent of adults with at least one shot, 20 per cent with two – by around the time spring turns officially to summer. The Public Health Agency of Canada says that means the return of things such as picnics and patio dining. Once 75 per cent of people have two shots, indoor sports events, college classes and family gatherings could resume.

Getting there will take patience. Ontario just extended its current lockdown for another two weeks, until at least June 2 – a discouraging, though expected, decision. Toronto cancelled a series of summertime public events. Whether Ontario schools will reopen at all this school year remains in question.

It will take some faith, too. These past few weeks have been filled with fear, frustration and anger – much of it aimed at government leaders who are doing the best they can in the midst of a tremendously complex and rapidly changing health emergency. Though it’s important to scrutinize how they have handled this crisis and to hold them to account for their failures, the kind of rancour and cynicism we have seen lately helps no one.

If we can muster those virtues – patience, faith – and hold out for a little while longer, the rewards on offer are rich. In England, kids are back at schools, while gyms, libraries and salons are open. In the United States, which had a much worse pandemic than we did but got its vaccination campaign under way faster, health officials have just announced that fully vaccinated people can take off their masks in most situations and go about life much as they did before the pandemic.

It will be a while yet before we achieve that sort of liberation. But it’s coming, as sure as the dawn.

Golfers tee off on Ford over Ontario’s ban on many outdoor activities
May 14, 2021 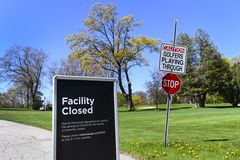 People are unwittingly finding themselves the target of COVID-19 misinformation
May 16, 2021
Follow Marcus Gee on Twitter @marcusbgee
Report an error Editorial code of conduct
Due to technical reasons, we have temporarily removed commenting from our articles. We hope to have this fixed soon. Thank you for your patience. If you are looking to give feedback on our new site, please send it along to feedback@globeandmail.com. If you want to write a letter to the editor, please forward to letters@globeandmail.com.
Comments