As protesters continue their efforts to stop the construction of a giant telescope in Hawaii, some academics and students are calling on Canada to withdraw from a project that is increasingly being portrayed as pitting science against Indigenous rights.

Last week, demonstrators forced the closing of an access road that leads to the top of Mauna Kea, a dormant volcano on the big island of Hawaii where several of the world’s largest astronomical facilities are located. The demonstrators oppose the construction of another observatory on the mountain, which is considered a sacred site by Indigenous Hawaiian people. On Wednesday, 33 native Hawaiian elders were arrested when police confronted protesters seeking to block access to Mauna Kea.

At issue is the Thirty Meter Telescope. The planned facility would house the biggest optical instrument in the northern hemisphere and would be used to study the most distant objects in the universe. Canada has committed $243.5-million toward the international project, which has a total estimated cost of between $1.5-billion and $2-billion.

Despite court decisions that have ruled in the telescope’s favour, protest organizers have vowed to continue to fight the project, which has been in a holding pattern since 2015. The latest flare-up in the dispute came last week, after Hawaii Governor David Ige announced that construction of the telescope could proceed.

By the weekend, more than one thousand people were gathered at Mauna Kea to oppose the project, according to local news reports. Virtually all research activities on the mountain have been shut down since last Tuesday.

“You can’t get up there without passing through a large number of protesters,” said Doug Simons, director of the Canada-France-Hawaii Telescope, which is among the observatories affected by the dispute.

After the elders were arrested, graduate students at some of the project’s partner institutions issued an open letter calling on the astronomical community to recognize “the broader historical context of [the] conflict and to denounce the criminalization” of those who are trying to halt the project. The letter has since accumulated more than 700 signatures, including those of some faculty members and students at Canadian universities.

“For the elders to be arrested is itself, I think, a criminal act. … These are respected leaders who are showing us that we, as astronomers, do not have consent from Native Hawaiian people to build on the mountain,” said Hilding Neilson, an astronomer and assistant professor at the University of Toronto.

Dr. Neilson, who is a member of the Qalipu Mi’kmaq First Nation band in Newfoundland, added his name to the open letter and also wrote to senior scientists who represent Canada on the project, urging a halt to efforts to build on Mauna Kea, which is judged to be the best possible site for the telescope. While his own research could be negatively impacted by such a decision, he added that he cannot support the project on ethical grounds.

On Monday, Vivek Goel, vice-president of research at the University of Toronto, where faculty members have long been involved in the development of the telescope, said the university "does not condone the use of police force in furthering its research objectives.”

In an online petition, a group of Canadian academics has called on Prime Minister Justin Trudeau together with Industry Minister Navdeep Bains and Science Minister Kirsty Duncan to divest Canadian funding from the project.

A spokesperson for the Ministry of Innovation, Science and Economic Development said, “We are monitoring the ongoing situation, and will continue to work with partners ... to find a shared path forward and peacefully engage with Hawaii, the Indigenous communities, and our international partners."

Last week, Ed Stone, executive director of the Thirty Meter Telescope, said in a statement: "We don’t have the power to clear the blockade. We need to depend on law enforcement to do that. It’s a very difficult and urgent situation for us.”

David Charbonneau, a Canadian astronomer and Harvard University professor, said that the prospect that further police action will be required to move construction forward should be a concern to the Trudeau government, which has committed to advancing Indigenous reconciliation in Canada.

Harvard is involved in a separate giant telescope project, which has selected a southern hemisphere site in Chile. Dr. Charbonneau said that he supports both instruments but said that the Thirty Meter Telescope project should revisit the possibility of moving to an alternative (though astronomically less favourable) site in the Canary Islands. A European-led research organization is also marshalling resources to build its own giant telescope in Chile.

While the Thirty Meter Telescope is led by a California based research consortium, the U.S. government has not yet committed to it. If the politics surrounding the Hawaiian protest discourage backing from Washington, Dr. Charbonneau added that Canada risks losing its investment while the project remains in limbo.

“They’ll burn [Canada’s] quarter-billion dollars and then the project won’t get completed,” he said.

U.S. congressional representative Tulsi Gabbard of Hawaii and Senator Bernie Sanders of Vermont, both in the race to be the Democratic party’s 2020 presidential nominee, have voiced their support for the protesters at Mauna Kea.

Hawaii officials want a peaceful end to telescope protests, no call for troops will be made
Subscriber content
July 20, 2019 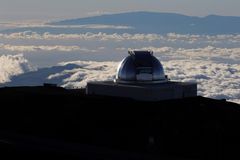 Divisive telescope to restart building next week in Hawaii
July 10, 2019 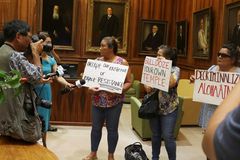