United by a widespread fear that the Northumberland Strait is imperilled by a pulp mill’s developing plans to discharge liquid waste into its waters, residents of three provinces numbering in the thousands rallied Friday in Pictou, N.S.

Known for its rich maritime history and cottage appeal, the picturesque town on the province’s north central coast has caught many a tourist by surprise, not just for its beauty, but for the stink that often pervades it. For decades, an eye-watering, sulfurous scent akin to that of rotten eggs has blown through town and surrounding areas from the smoke stacks at Northern Pulp, a mill owned by an Indonesia-based parent Asia Pulp and Paper. It is located on a sprawling tract of land directly across from Pictou’s waterfront.

Locals have waged a five-decade battle with the mill’s owners to keep its emissions in check. However, the ante was raised recently when the mill began holding public meetings to disclose its plans to build a pipeline in the Northumberland, the body of water separating PEI from New Brunswick and Nova Scotia. It will dispose the “treated effluent” that results from the mill’s process of manufacturing bleached kraft pulp into the strait, which attracts thousands of tourists each year and also supports thousands of fishing families, not only from nearby communities, but also in Prince Edward Island and in New Brunswick, which share access to it.

Northern Pulp is in the midst of conducting an environmental assessment on its effluent pipe plan, which is due to be submitted to the provincial government later this summer, said spokesperson Kathy Cloutier. The company has tried over the past several months, through community open houses and talks with fishermen, to reassure those who are concerned that there should not be any detrimental effects from its pipe plan.

“Shouldn’t is not good enough – we’ve got to have total assurance,” said Ronnie Heighton, a life-long fisherman.

There is deeply rooted concern about the mill’s plan in and around Pictou, where friction is common due to the fact that many townspeople work for Northern Pulp.

Still, hundreds of residents have taken a “no pipe” position and have posted signs declaring that sentiment, including some with skulls and crossbones; other signs are urging people to “stop and think.” The signs have been hung in shop windows, on telephone polls and amid flowering gardens.

“The protection of fishing in the Northumberland Strait is paramount,” Pictou Mayor Jim Ryan told rally-goers, including Indigenous leaders, fishermen, environmentalists and community organizers, on Friday.

Mr. Ryan acknowledged that it is unusual for a municipal leader to take such a strong stand on a divisive issue – the mill employs about 300 people in a town that, like many others, struggles to retain jobs – but said the community’s majority position is clear. To strengthen it, he said, they are hoping to attract the attention of federal Environment Minister Catherine McKenna.

At least one fishermen’s organization has applied to Ottawa to have the pipe project designated for a federal environmental assessment – currently the province has jurisdiction – under the Canadian Environmental Assessment Act. Several other advocacy groups and hundreds of individuals have joined a letter-writing campaign in support of the application.

Friday’s rally was peaceful and featured a flotilla of more than 150 fishing boats loaded with supporters who clogged Pictou’s harbour after conducting a sail-by of the Northern Pulp mill with air horns blaring for effect. One of the boats ferried a contingent of Mi’kmaq leaders to shore, including Pictou Landing First Nations Chief Andrea Paul.

Wearing a traditional headdress, Ms. Paul made her way to the stage where, after addressing the audience, she broke down in tears at what she said was a historic show of solidarity.

The Pictou Landing band lost the use of a historic fishing ground adjacent to their reserve known as Boat Harbour, a tidal estuary that was used for the construction of the mill’s current effluent treatment facility in the 1960s. The body of water, now contaminated with dioxins, mercury, heavy metals and other substances, is one of Nova Scotia’s worst environmental disasters; the province’s environment minister referred to it last year as one of the worst examples of “environmental racism” in the province.

Legislation forcing the stoppage of effluent treatment at Boat Harbour will see it shuttered by 2020. Northern Pulp plans to have its new effluent pipe completed to replace it.

“We do not want this pipe in our waters,” Ms. Paul said on stage at the rally. “We need to protect our resources. All of us have an inherent duty to do that.” 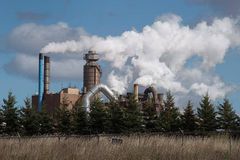 P.E.I. will have input into Nova Scotia mill's effluent plan: Minister
January 25, 2018
Follow Jessica Leeder on Twitter @jessleeder
Report an error Editorial code of conduct
Due to technical reasons, we have temporarily removed commenting from our articles. We hope to have this fixed soon. Thank you for your patience. If you are looking to give feedback on our new site, please send it along to feedback@globeandmail.com. If you want to write a letter to the editor, please forward to letters@globeandmail.com.
Comments