It could be days before Manitoba Hydro is able to restore power to all of the customers blacked out by a snow storm that blasted southern areas of the province, prompting a state of emergency.

The utility said 34,000 customers were still without electricity by noon on Sunday.

“It is clear the tremendous effort to restore power and other activities will be ongoing for some time,” Premier Brian Pallister said in a news release Sunday.

“The state of emergency will help with that effort.”

Portage la Prairie, about 90 kilometres west of Winnipeg, has been especially hard hit – tweeting that the city’s sewage lift stations were operating on backup power and that residents should not flush their toilets – at all.

Other communities are also affected, including a number of remote Indigenous communities.

Manitoba Hydro said the powerful and slow-moving storm, which began on Thursday, damaged major transmission towers and broke hundreds of hydro poles. The utility has said the heavy snow and blocked roads made it difficult for crews to initially assess the damage in the hard-hit areas.

In some areas it said there were reports of snowdrifts more than two metres high.

“The effects of the storm are far worse than what we initially anticipated in those areas,” Manitoba Hydro chief executive Jay Grewal said in a statement on Sunday, which noted repairs will take days.

“Sections of our transmission and distribution system are completely destroyed and will require a total rebuild before coming back on line.”

Ms. Grewal said that impassable roads are still a problem, and that there may be shortages of materials necessary for repairs.

The province has asked people to restrict non-essential travel to facilitate snow-clearing for emergency response, to call 911 about downed power lines and to ensure proper ventilation when using alternative combustible heat sources.

The Canadian Red Cross said it has opened a warming shelter at the RBC Convention Centre in Winnipeg for people from up to 11 First Nations that have been without power, in some cases more than 48 hours.

It said the response is part of an agreement between the Red Cross and the federal government and follows a decision by the leadership of the communities in consultation with Ottawa.

The province explained that the state-of-emergency declaration will allow Manitoba Hydro to invoke mutual aid clauses with neighbouring utilities. It said that immediately following the declaration, Hydro reached out to Ontario’s Hydro One, Minnesota Power and Sask Power to request resources such as replacement transmission towers, distribution poles and specialized electrical equipment, as well as crews.

Ms. Grewal said the declaration also allows the utility to access snowplows and other resources from the province and municipalities.

She acknowledged the situation creates “a great deal of hardship.”

“We are trying our best to deliver power from other supply sources to the affected areas,” Ms. Grewal said in the statement. “But in many cases the damage to the local distribution systems is so widespread, there is no way to get that power to those customers.”

The province is also warning rivers have been rising and that it is monitoring the levels as the snow, mixed with rain, melts.

Manitoba Hydro unable to estimate how long some customers will be without power
October 13, 2019 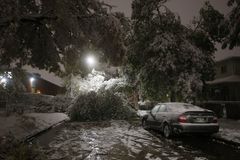 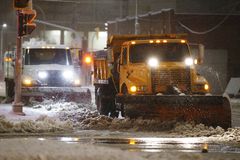