A Vancouver Island woman who credits Metallica with saving her from a cougar got to thank the band personally when frontman James Hetfield called to talk about the encounter.

Dee Gallant was walking her eight-year-old husky-retriever, Murphy, down a logging road in south Duncan two weeks ago when she says she suddenly got the feeling she was being watched.

“I looked over to the right and there’s this cougar prowling toward me, doing that really stalking kind of cat prowl with his head down and his bum up,” Ms. Gallant recalled in an interview.

She waved her arms in an effort to spook the cougar, to no avail. She shouted at the cat, threatening to fight him, she said with a chuckle. The animal, then about 50 feet away, stopped advancing but its eyes remained locked on her.

“I thought, ‘I’ll just start recording,' ” Ms. Gallant said. “‘This is really cool, I want to share this, and if I get eaten, then at least people will have footage of what happened and they’ll know what happened to my body when they find my phone.’”

Moments passed. Soon deciding she was not content with the encounter ending with a viral video of her death by cougar attack, Ms. Gallant made another effort to scare the cat off.

She pulled out her smartphone again and began scrolling through her music library, looking for a song she thought might “give the right message to the kitty" – and landed on Metallica’s Don’t Tread on Me.

“I thought, ‘That’s perfect. It’s got that really strong intro and it says exactly what I want to say,’ ” she said.

Ms. Gallant turned the volume up and pointed her phone at the cat, which immediately turned and ran.

She posted about the encounter on Facebook that evening. Friends began tagging the band and sharing the story as well. Media picked up the story, first locally, then internationally. She received calls from Spain and Italy.

“When a CNN reporter tracked me down at work, I thought, ‘Okay, this is getting really big,’ ” she said.

Last Thursday, Metallica guitarist Kirk Hammett posted a link to a story about the encounter on his Facebook page – a development that thrilled Ms. Gallant. And on Friday morning, an artist liaison for the group messaged to ask for her contact information.

“I almost peed my pants I was so excited,” she said.

Her phone rang that afternoon, with the call display showing a California number.

“Hi, Dee?” said the voice on the line. “This is James Hetfield of Metallica.”

“I didn’t know what to say," Ms. Gallant said. "I was more scared talking to him than I was facing a cougar.”

The two talked about dogs and life on Vancouver Island. The guitarist said that he had read Ms. Gallant wanted Metallica to know that it saved her life, and that he did in fact know.

After their phone call, Mr. Hetfield texted her a photo of himself with a big grin, making a devil horn’s gesture.

“It was really cool," Ms. Gallant said. “I was beside myself excited." 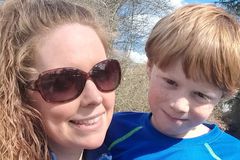 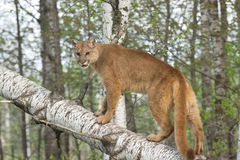